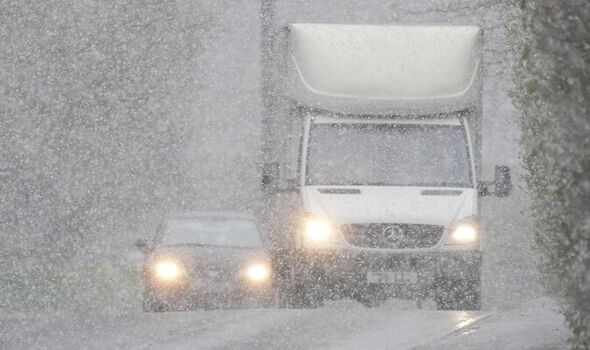 Snow and hail showers are expected to bring icy surfaces and potential travel chaos as the bitter chill makes its way down the UK. The Met Office extended its yellow ice warning on Thursday.

A spell of unsettled weather is on the way for much of the country this week, with The Met Office forecasting rain showers and a possible mix of sleet and snow mainly on high ground in the north.

Forecasters predict parts of eastern England will be affected by icy patches and snowfall with hail showers pushing into East Anglia. This could lead to small amounts of snow to build up in places as well as some icy stretches.

The Met Office warning covers the north-east of Essex, including Colchester, Manningtree and Harwich.

Areas in the north of England, including West Yorkshire, have already experienced snowy conditions with people waking up to snow on roofs, trees and the ground.

Dry and mild weather associated with the high-pressure system dominating the country last week has shifted as colder Arctic air pushes south across most of the country.

Wintry showers are forecast for many areas on Thursday and into Friday, especially in the north and east.

The Met Office says snow will eventually become increasingly confined to higher ground, with rain more likely at low levels, although an odd flurry of sleet or snow cannot be ruled out.

Accompanying the sleet and snow is a drop in temperatures which many places have been experiencing.

Isolated rural areas in the north of Scotland could see temperatures as low as –8C later this week with sub-zero temperatures possible overnight for much of the UK.

A spokesperson for The Met Office warned that more weather warnings could be issued for Friday morning.

Meteorologist Matty Box said there was currently a cold air mass over the UK.

He said: “There is an ice warning out at the moment. If there’s any melt and it refreezes over night then there’s an ice risk.

“I suspect there will be a similar risk for Thursday night to Friday morning.”

He added that there will be a similar chance of snow over Thursday night and Friday morning as well.

Mr Box said: “It will be concentrated and there will be snow showers. It will be eastern and northern areas of the UK that are more likely to see any showers of rain, sleet or snow.”

The weather is then expected to improve over the weekend with some sunny spells.