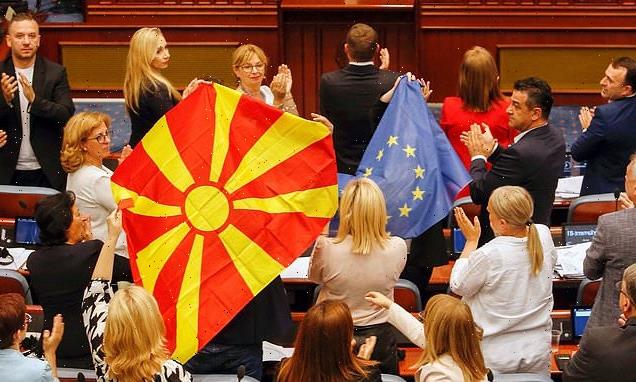 The European Union agreed on Monday to open accession talks with Albania and North Macedonia after Skopje finally resolved a longstanding dispute with its EU neighbour Bulgaria.

The beginning of accession talks comes after North Macedonia and Bulgaria on Sunday signed a French proposal that would make Macedonian an official language in the EU, as well as provide other guarantees.

The North Macedonian parliament voted on Saturday in support of the proposal paving the way for Bulgaria to lift its veto of  the country joining the bloc.

‘We have taken another important step towards bringing the Western Balkans closer to the EU,’ he added after the green light was approved in a meeting of EU envoys in Brussels.

EU member Bulgaria had until recently held up any progress for those accession talks, accusing North Macedonia’s government of disrespecting shared cultural, linguistic and historic ties. 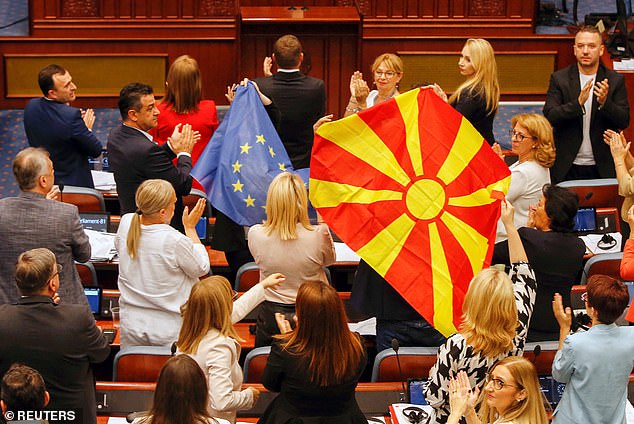 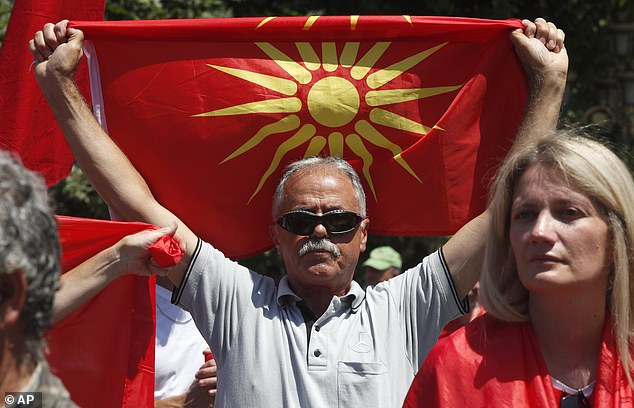 The beginning of accession talks comes after North Macedonia and Bulgaria on Sunday signed a French proposal that would make Macedonian an official language in the EU, as well as provide other guarantees 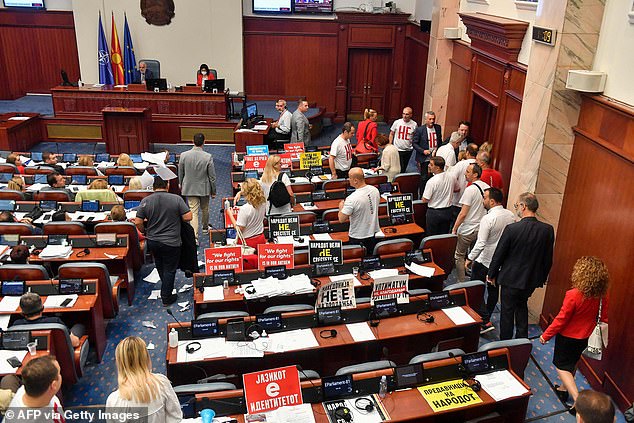 The North Macedonian parliament voted on Saturday in support of the proposal paving the way for Bulgaria to lift its veto of the country joining the bloc, however the opposition lawmakers left the session before voting in protest

The dispute also stalled Albania’s bid to become a member of the 27-nation bloc, due to a long-held policy that the ambitions of both countries to join the EU be treated together.

The concessions require that North Macedonia recognise a Bulgarian minority in its constitution, recognise that the Macedonia language derives from Bulgarian, and ban hate speech

But the agreement in the North Macedonia parliament was far from unanimous, with opposition lawmakers abstaining from the vote and walking out.

Skopje has been rocked by nightly protests over the French proposal for the month of July, as nationalist elements within the country rail against what they see as concessions to neighbouring countries that damage their national identity.

In 2017 North Macedonia – formerly just Macedonia – resolved another long running dispute, this time with southern neighbour Greece over the name of the country.

Greece considered Macedonia to be a Greek name that Macedonia had usurped as a Slavic country and vetoed its EU membership over it.

A compromise was reached to rename the country North Macedonia and Greece dropped its opposition, only for Bulgaria to step in with a new veto and a fresh round of grievances.

But with domestic opposition sidelined, the foreign ministers of Bulgaria and North Macedonia met in Sofia on Sunday to discuss the next steps of North Macedonia’s path to EU membership talks. 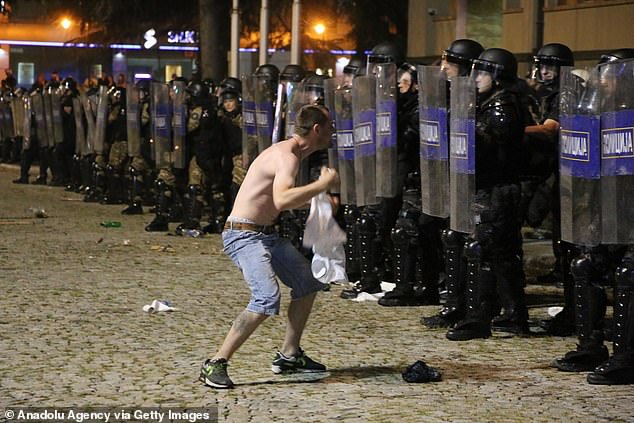 Protesters gathering outside the government building clash with police officers during a protest against the French proposal to resolve the dispute between North Macedonia and Bulgaria in Skopje, on July 5 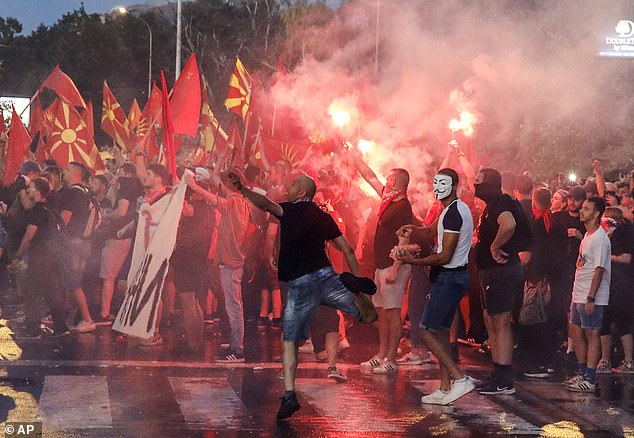 People light flares and throw eggs and stones on the foreign ministry building during a protest in Skopje as demonstrators tried to storm government buildings on July 5, after French President Emmanuel Macron announced a proposal that would see North Macedonia make concessions to Bulgaria 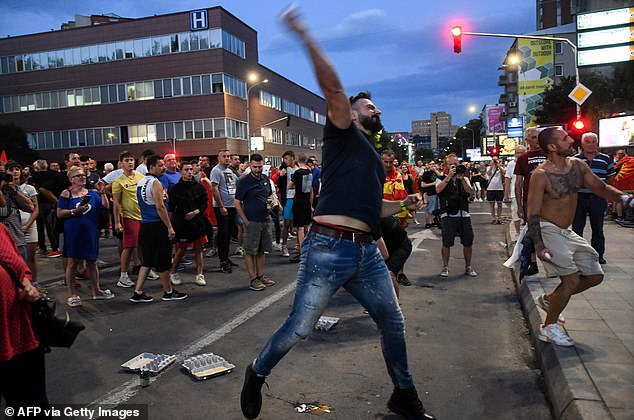 The protest was backed by the main opposition VMRO-DPMNE rightwing party and other opposition groups, against a French proposal aimed at ending a row with Bulgaria, in which Skopje would have to include ethnic Bulgarians in its constitution ‘on an equal footing with other peoples’ and change history textbooks 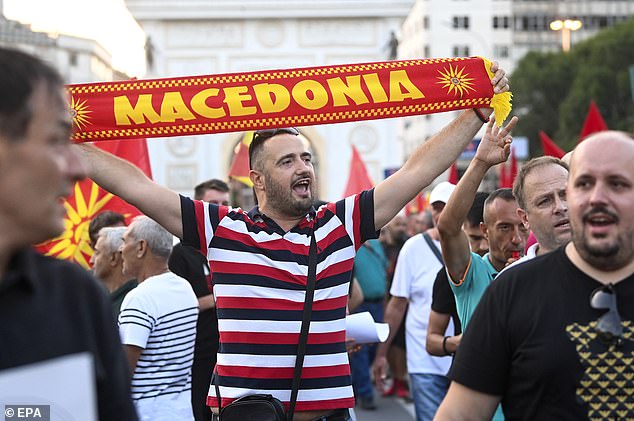 Both countries agreed on ‘extremely ambitious short-term and long-term measures, which in practice aim to solve many of the open issues,’ Bulgarian Foreign Minister Teodora Genchovska told reporters.

Her counterpart, Bujar Osmani, said his country is counting on Bulgaria’s support and expressed hope that bilateral ties are entering a new phase.

‘It is a historic opportunity for us that after 17 years with the status of a candidate country for membership, the Republic of North Macedonia gets the opportunity to start negotiations with the EU,’ said Osmani.

They included protection for Bulgarians living in North Macedonia by including them in its constitution on an equal basis and no assumption that Bulgaria would recognise Macedonian as a separate language from Bulgarian.

But many people in North Macedonia are outraged by the concessions.

‘We don’t want somebody to destroy our history, our future, because we are Macedonians,’ protester Robert Cvetkovski told Al Jazeera at a rally in Skopje.

‘Bulgaria said that our language is Bulgarian. They changed our name a few years ago. We are here because we don’t like this. We are Macedonians and we speak Macedonian,’ student Tijana Stojanovska said.

The size of the Bulgarian community in North Macedonia is a matter of contention. Official data from the 2021 census put it at 3,504 people, or about 0.2% of the population.

Bulgaria has doubted the figure, noting that about 90,000 of North Macedonia’s roughly 2 million people have received dual Bulgarian citizenship over the last two decades based on family roots. About 53,000 more applications are pending.

The deal would also unblock the start of negotiations for neighboring Albania, another EU hopeful. The EU prospects of the Western Balkan countries gained increased attention in the wake of the bloc’s efforts to bring Ukraine closer following the Russian invasion.