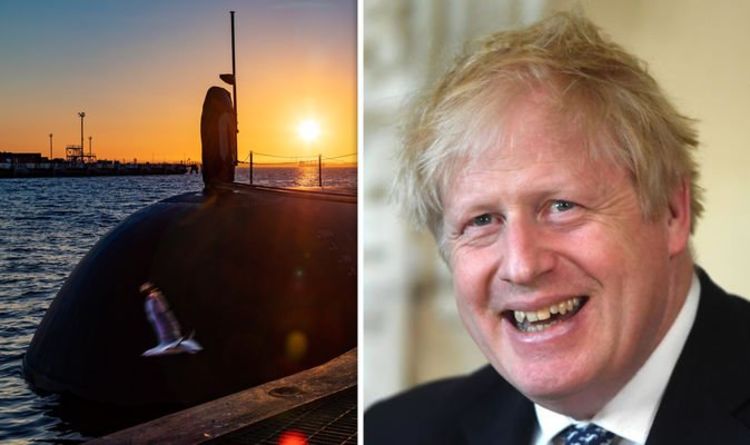 And Jayne Adye, director of the pro-Brexit campaign group Get Britain Out, emphasised that the AUKUS deal unveiled by Mr Johnson, US President Joe Biden and Scott Morrison, Australia’s Prime Minister, would not have been possible without Brexit – and was a huge endorsement of the UK Prime Minister’s much-vaunted Global Britain vision. However, she also suggested it was likely to see French President Emmanuel Macron – whom she compared to Napoleon – spearheading a move towards a bloc-wide military force.

AUKUS has irked France in particular because in accordance with the terms of the deal, Australia will build a fleet of nuclear submarines using US and UK technology – and has therefore pulled the plug on a deal with France in respect of conventional subs.

Ms Adye said: “Global Britain is an idea which is about more than linking trade deals and should signify the need for the United Kingdom to take a lead on important issues within the international community and break away from the European Union approach, which seeks to placate and play second fiddle to major competitors like China and Russia.”

New Foreign Secretary, Liz Truss MP was now in prime position to bring the “ambition and commitment” she demonstrated as International Trade Secretary to bear in her new job, Ms Adye predicted.

She added: “The cherry on top of this cake, is the fact it means the agreement Australia signed with France and the EU in 2016 – worth £65billion – to deliver 12 non-nuclear French-built attack submarines, has now been rendered null and void, with the Aussies much preferring to now use the enhanced skills and technology possessed by UK and American engineers.

“This deal – which side-lines the EU and shows the UK’s rock-solid international reputation – will force the EU to pick up the pace for their vision of an EU Army, with Emmanuel Macron furthering his ‘Napoleon complex’ by putting himself at its head when France takes over the rolling EU Council Presidency in January 2022.”

With the AUKUS deal “laying the ground-work”, the UK should not follow the EUY”s lead by “rushing into a blind panic”, Ms Adye stressed.

JUST IN: Britain in line to be tech superpower as Boris slashes EU red tape

“This means continuing with our push to join the Comprehensive and Progressive Agreement for Trans-Pacific Partnership (CPTPP) and further develop our new relationship with the Association of Southeast Asian Nations (ASEAN) group, both of which have a specific focus on countering the influence of China.”

While there has been no specific cost to this agreement set out to the public so far, it was about more than money, Ms Adye said.

She added: “This co-operation will go beyond submarines, and will create hundreds of high-skill, high-wage, additional jobs within the UK and will set up a new principle of shared technology with our closest allies which can continue for decades to come, with zero involvement by the overly bureaucratic and meddling EU.”

Ms Adye also hailed the agreement as tangible evidence of the benefits of quitting the EU.

She said: “A reminder for everyone – ‘AUKUS’ is only possible without the involvement of the EU because of Brexit, and the freedom from common EU foreign and security policy it gives us.

“The opportunity created by ‘AUKUS’ is one we cannot afford to waste, and the ambition we have shown to directly compete with the EU and come out on top must now be turned towards other areas, such as unblocking the World Trade Organisation and re-engaging with the Commonwealth.

“However, just as has happened many times before, if these opportunities are wasted, then Boris Johnson will be facing an uphill struggle to stay in power – even with his new Cabinet in place!”

Defence Secretary Ben Wallace today insisted Britain did not “go fishing” for the pact to provide nuclear-powered submarines to Australia with the US after France called it a “stab in the back”.

French foreign minister Jean-Yves Le Drian accused the Australians of a betrayal because the alliance meant they scrapped a multi-billion deal for France to provide subs.

The UK, US and Australia agreed to co-operate on the development of the first nuclear-powered fleet for the Australian navy.

As a result, Canberra scrapped a deal worth roughly £30 billion which was struck with Paris in 2016 for France to provide 12 diesel-electric submarines.

A diplomatic row broke out, with Mr Le Drian telling France-Info radio: “It was really a stab in the back.

“We built a relationship of trust with Australia, and this trust was betrayed.”

Mr Wallace said he recognises the “frustration” from France after speaking to his French counterpart Florence Parly on Wednesday night.

He told BBC Breakfast: “I understand France’s disappointment. They had a contract with the Australians for diesel-electrics from 2016 and the Australians have taken this decision that they want to make a change.

“We didn’t go fishing for that, but as a close ally when the Australians approached us of course we would consider it. I understand France’s frustration about it.”