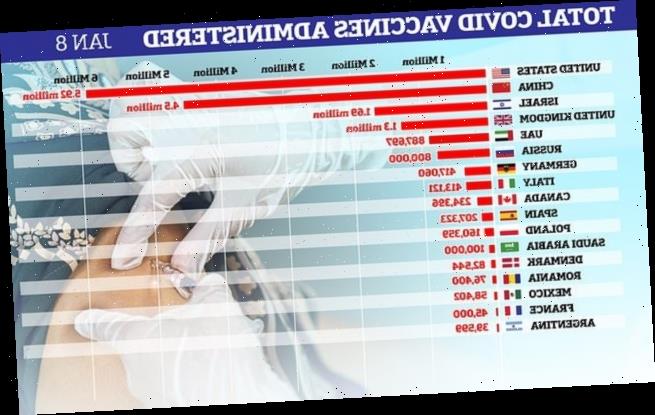 The EU today announced it had bought another 300million doses of the Pfizer/BioNTech vaccine and approved a plan to scrape an extra dose out of each vial as the bloc tries to catch up to the faster rollouts in the US and Britain.

With Israel still leading the global race – having given jabs to nearly 20 per cent of its population – the EU is now gearing up to adopt one of the country’s methods by having medical workers get six doses out of each vial rather than five.

Israeli PM Benjamin Netanyahu says plans are in place to vaccinate everyone in the country by the end of March, making it ‘the first country in the world to emerge from the coronavirus’.

‘We will be able to embrace each other and get back to life,’ Netanyahu said.

But there is mounting criticism of the slow pace of vaccinations across Europe, where the EU’s drug regulator said today it could approve the Oxford/AstraZeneca vaccine before the end of January – having previously said this was unlikely.

European Commission chief Ursula von der Leyen said the 27-member union had reached a deal to double its supply of the Pfizer jab to 600million, saying the EU’s total stocks would be enough for 80 per cent of the bloc’s population.

Several EU governments including France, Germany and Spain have faced anger over the slow rollout – with concern in Brussels over a separate German deal to get another 30million jabs in addition to the 60million it is due under the EU scheme.

Among EU countries, Germany has given out the most doses in total while Denmark has the best per-capita rate but all 27 nations are moving at a slower pace than either the UK or US.

There was also good news from BioNTech as the firm announced the results of a preliminary study which showed that its vaccine would work against the UK and South African variants of the coronavirus. 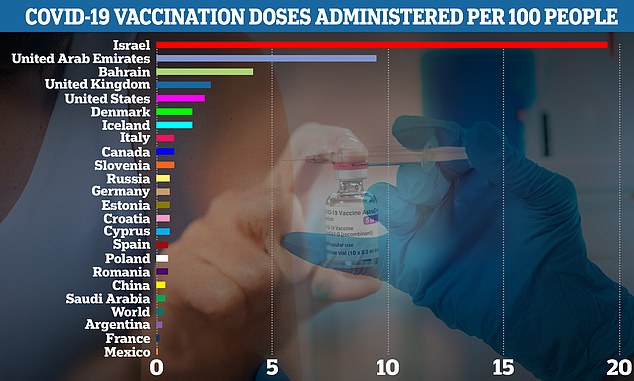 Israel is leading the global vaccine race by a mile, followed by two fellow Middle East countries, then the UK and US – all of which are outperforming any EU country so far. Denmark has the best per-capita rate in the 27-member bloc, while Germany has distributed the most doses outright 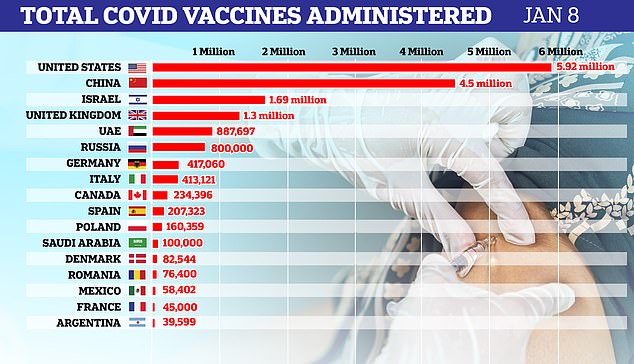 The US and China have given out the most vaccines in the world, while Russia has inoculated 800,000 people using a home-grown vaccine which has won little enthusiasm elsewhere

Von der Leyen today defended the EU’s vaccine plans but admitted that ‘difficult months’ lie ahead because of the scale of the task and persistently high infections.

‘I’m convinced that when we look back at this one day we’ll see, well yes, at the beginning, there was a bumpy road [but] well, that’s always the case,’ she said.

‘We have already secured an amount of doses that we need to vaccinate 380million Europeans, and this is more than 80 percent of the European population.’

Responding to reports of wealthy Germany striking a separate deal, von der Leyen said EU capitals had agreed there would be ‘no parallel negotiations, no parallel contracts’.

Her spokesman Eric Mamer dodged repeated questioning by journalists over Germany’s order, saying he ‘could not say whether there was an agreement or not’.

But Germany’s health ministry rejected any criticism, saying its bilateral deal with BioNTech was ‘compatible with the EU agreements’.

Only the Pfizer/BioNTech jab has been used in the EU so far, but the Moderna vaccine was approved on Wednesday and AstraZeneca’s could soon follow.

As recently as December 29, an official at the European Medicines Agency said it was ‘improbable’ that the Oxford/AstraZeneca jab would be approved in January.

But today, the EMA said approval by the end of January could be in sight once the developers submit their paperwork next week.

‘This will, of course, depend on the data we receive and the evaluation progress,’ said the EMA’s executive director Emer Cooke.

‘Once we actually receive the application, we will make a public announcement on this.’ 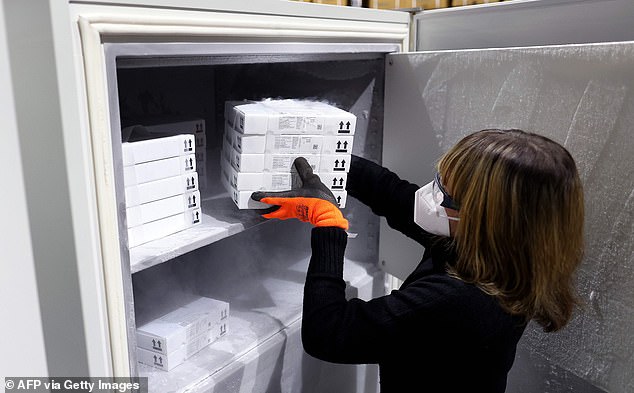 GERMANY: Jessica Mueller puts supplies of the Pfizer/BioNTech vaccine into an ultra-cold freezer at a warehouse near Magdeburg today, amid concern in Brussels over a separate bilateral deal between Berlin and the vaccine developers

France says the Moderna vaccine should begin arriving in the coming days, giving the country a boost after a widely-criticised start that saw only 7,000 people vaccinated by late Tuesday.

Care home workers say the process has been strangled by red tape, with one saying he had to call 20 doctors over the Christmas period to get their consent before arranging vaccinations.

The slow start has angered French president Emmanuel Macron and left France playing catch-up with other European nations where procedures are simpler.

Ministers have vowed that procedures will be simplified, and the first phase has been widened to include hospital staff and paramedics aged over 50.

In Britain, where more than a million people have been inoculated, nursing home residents can receive a jab immediately after giving their consent. The same is true in Spain and Italy.

The UK today gave its approval to the Moderna vaccine, having already started using the Oxford/AstraZeneca jab earlier this week.

Britain has ordered 10million doses of the Moderna jab, but they are not expected to be delivered until the spring.

Illustrating the desperate immediate situation in parts of the UK, London mayor Sadiq Khan declared a ‘major incident’ in the capital.

‘The stark reality is that we will run out of beds for patients in the next couple of weeks unless the spread of the virus slows down drastically,’ he said.

Meanwhile, some EU doctors have already been doing what the EMA has now formally approved – getting six doses out of each vial rather than five.

The EMA says that the sixth dose can safely be extracted from Pfizer/BioNTech vials as long as a particular type of syringe is used.

But healthcare workers should not mix the leftovers from ‘multiple vials to make up a full dose’, the agency stressed.

Pharmaceutical companies regularly put more vaccine than necessary into vials so that minimum dosage can be ensured even if there is some spillage. 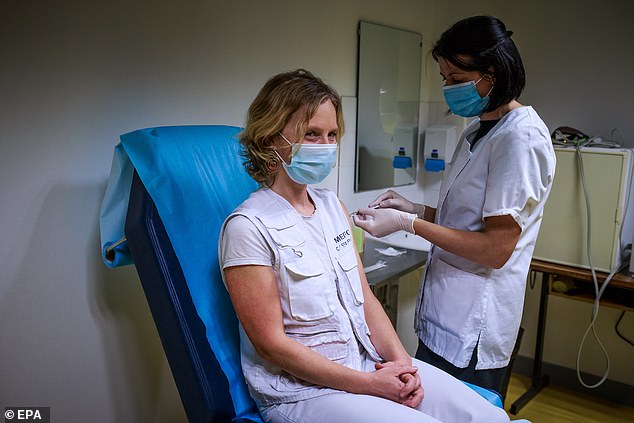 FRANCE: A medical worker is given the Pfizer/BioNTech vaccine at a hospital near Dijon on Thursday following criticism of the French government over its slow progress

German health ministry spokesman Hanno Kautz said the change would come into effect immediately, boosting available doses of the vaccine by 20 per cent.

Israel’s health minister Yuli Edelstein has previously praised nurses in the country for reducing waste by squeezing out the sixth dose for their patients.

Israel has left the world behind after ordering millions of doses in advance, distributing them quickly to remote areas and enlisting military reservists to help.

PM Benjamin Netanyahu has put the vaccination drive at the centre of his campaign ahead of an Israeli election on March 23.

‘We will be the first country in the world to emerge from the coronavirus,’ he said last night as he announced a further agreement with Pfizer.

‘The agreement that I have made with Pfizer will enable us to vaccinate all citizens of Israel over the age of 16 by the end of March and perhaps even earlier, meaning that we will vaccinate the entire relevant population and everyone who wants to will be able to be vaccinated.’

The rapid rollout comes amid a rise in cases which Netanyahu has blamed on the British mutation of the virus, which is thought to be more transmissible.

A similar variant in South Africa has caused further alarm because of concerns that the vaccines developed so far might be less effective against it.

But BioNTech said today that its vaccine had been found to work against a key mutation found in both the UK and South African variants.

The research ‘indicates that the key N501Y mutation, which is found in the emerging UK and South Africa variants, does not create resistance to the Pfizer-BioNTech vaccine induced immune responses’, the German company said.

The firm previously said that it could adapt its vaccine to fight a mutated form of the virus in as little as six weeks.

The latest research has yet to be peer-reviewed, but experts expressed cautious optimism at the findings.

‘This is good news, mainly because it is not bad news,’ said Stephen Evans, professor of pharmacoepidemiology at the London School of Hygiene and Tropical Medicine.

‘Had the opposite result been found, that the vaccine did not seem to have efficacy against the variation of the virus studied, that would have been bad and very concerning.’