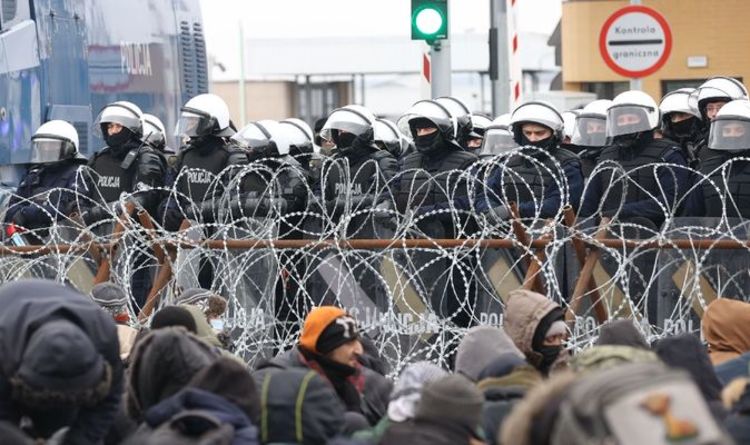 EU officials fear the ongoing migrant row between Poland and Belarus could spark a Europe-wide crisis as in 2015, according to professor Aleks Szczerbiak. The academic slammed Belarusian President Lukashenko for the chaos at the border between Poland and Belarus which has left thousands of people stranded in cold conditions without adequate shelter or food.  He warned: “The crisis is created by Lukashenko… this will create a crisis across the continent.”

“The crisis is created by Lukashenko, he’s the person, it’s his regime that have provided the visas for these people, provided them with this false promise that they’ll be able to get across the EU border.

“He’s the person that shipped them over to that border.

“He’s the person that’s trying to push them across.

JUST IN: ‘Must do better!’ Sunak’s verdict before Boris’ Cabinet meeting

“All that Poland is trying to do is to defend the integrity of its borders,” he added.

“What Poland knows and what the EU knows is that if the EU does allow this crisis to escalate, it’s learning belatedly, you might say from what happened in 2015, when large numbers of migrants were admitted from through Germany, and sorry, through Greece, and in Italy, is that this will create a crisis across the continent, basically.

“So I think that you know, belatedly, the EU is kind of woken up to this and that’s why it’s it is standing pretty much for squarely behind Poland.

“Because it knows that it’s its border that is at stake, not just the Polish border, and it knows it doesn’t want to repeat the kind of crisis that it had in 2015.”

AFP News Editor Dave Clark told France 24 that Brussels has “shot itself in the foot” for not passing a common border policy that would have seen member states coordinate a plan to take in migrants.

He warned that Belarus and Russia were now looking to take advantage of the lack of European unity.

Mr Clark told France 24: It’s good that the European Union is standing up now, and they’ve only got themselves to blame if this is the crisis they found themselves in.

“We know who Lukashenko is, we know who Vladimir Putin is and yet somehow, we’ve just deepened our reliance on natural gas coming from Russia, some of it via Belarus, and we failed for a decade now to develop some kind of core common border policy that could absorb what is only 2000 Iraqi Kurds or so in the forest of eastern Poland.

“You know, they could all be absorbed tomorrow fairly simply but the European Union for years has just shot itself in the foot on border policy, and our enemies and let’s be clear about this Putin and Lukashenko opponents of the European Union of NATO of the Transatlantic Alliance and solidarity in the rest of Europe, the enemies have spotted our weak points.

“which we’ve only deepened over the years, our inability to deal with migrants and to set up a humane and shared system of dealing with them and our increasing reliance on natural gas supplies from Russia which clearly going to be used as a political tool against us.”

He told GB News: “[Putin] wishes to test NATO’s response and once he finds a weak point, he’ll keep on pressing until he can exploit it.”