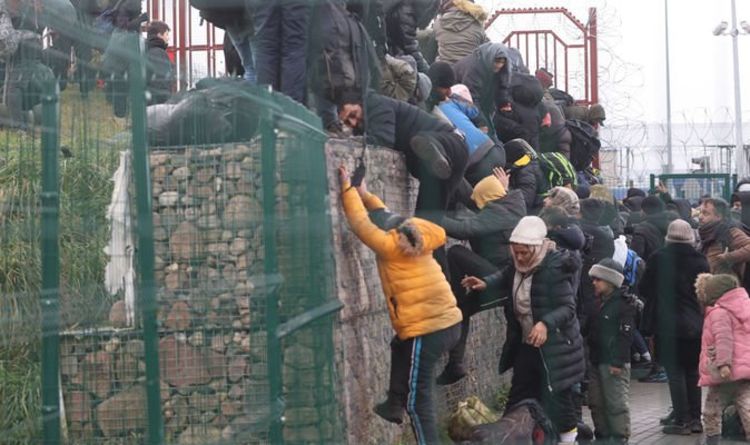 And the decision was confirmed by Turkey’s Civil Aviation General Directorate (SHGM) on Friday. Large numbers of people have been massing at the country’s border with Poland in recent days.

Belarusian President Alexander Lukashenko has been accused of cynically exploiting the situation in what the EU has described as a “hybrid attack”.

Meanwhile neighbouring countries have warned the crisis has the potential to escalate into a military showdown.

The European Union claims Belarus is encouraging thousands fleeing war-torn parts of the world to try to cross its borders and may impose new sanctions on Belarus and airlines ferrying the migrants as soon as Monday.

A statement issued on Belavia’s website said: “In line with a decision by the Turkish authorities, citizens of Iraq, Syria, Yemen will not be accepted for transportation on flights from Turkey to Belarus from 12.11.2021.”

Belavia, which is already barred from flying over the European Union after the grounding of a plane earlier this year, continues to fly to destinations like Egypt, Jordan, UAE, Armenia, Georgia, Azerbaijan, Uzbekistan and Kazakhstan.

Turkey and its flag-carrier Turkish Airlines have also been accused of contributing to the migrant flow, an accusation it has rejected.

JUST IN: ‘Must do better!’ Sunak’s verdict before Boris’ Cabinet meeting

SHGM tweeted: ”In relation to the illegal border crossing problem between the European Union and Belarus, it has been decided for citizens from Iraq, Syria and Yemen wanting to travel to Belarus from our country’s airports not to be sold tickets and not to be allowed on planes.”

The EU is also understood to have held discussions about including third-country carriers such as Turkish Airlines and Aeroflot in its expanded sanctions list for human trafficking and smuggling, with Friday’s announcement indicating the threats were having the desired effect.

One EU diplomat said: “At the end of the day, the EU market is more important than 10 additional flights to Belarus.”

The Belarusian state border authority said on Friday a group of roughly 100 migrants was moving toward a makeshift camp at the border with Poland, Russia’s RIA news agency reported.

The Polish Border Guard said on Friday on Twitter there had been 223 attempts to illegally cross the border on Thursday.

President Andrzej Duda went to the border late on Thursday, when Poland celebrated its Independence Day.

He tweeted: “I would like to thank all the Soldiers, Policemen, Border Guards and everyone who serves on our border. They protect our safety with their dedicated service.”

German Chancellor Angela Merkel discussed the situation on the Poland-Belarus border with Russian President Vladimir Putin for the second time in as many days on Thursday.

Spokesman Steffen Seibert said: “The Chancellor stressed that the situation was caused by the Belarusian regime, which was using defenceless people in a hybrid attack on the European Union.”

Also on Thursday, countries bordering Belarus claimed the migrant crisis on the European Union’s eastern borders could escalate into a military confrontation, while Ukraine said it would deploy thousands more troops to reinforce its frontier.

Lithuania, Estonia and Latvia all accuse Belarus of posing serious threats to European security by deliberately using migrants to retaliate for EU sanctions.

A joint statement by the countries’ defence ministers said: “This increases the possibility of provocations and serious incidents that could also spill over into the military domain.”