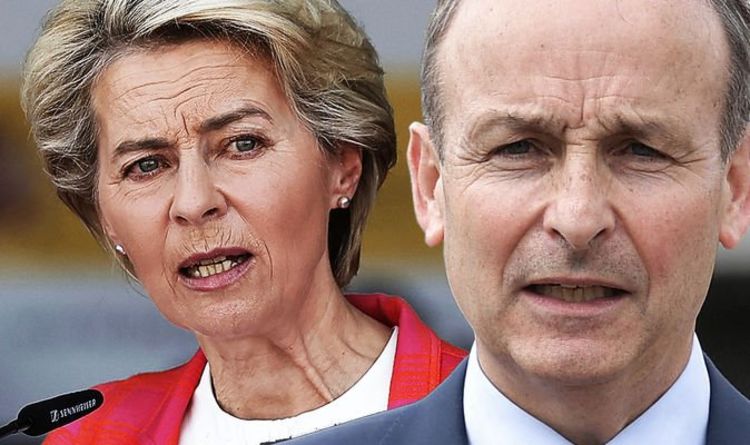 Together with others including Apple and Microsoft, the three tech giants have their European headquarters in Dublin, making Ireland, led by Taoiseach Micheal Martin, the lead EU regulator in terms of enforcing EU law. However, an investigation by the Irish Council for Civil Liberties (ICCL) suggested 98 percent of 164 significant complaints about privacy abuses are currently unresolved by the country’s Data Protection Commission (DPC).

Spain, despite having a vastly smaller budget than Ireland, produces ten times as many draft decisions.

Johnny Ryan, who is a senior fellow at ICCL, described Ireland as the “worst bottleneck” when it came to enforcement of the General Data Protection Regulation (GDPR) governing data protection and privacy in the European Union and the European Economic Area.

He added: “GDPR enforcement against Big Tech is paralysed by Ireland’s failure to deliver draft decisions on cross-border cases.”

The rest of the EU is reliant on Irish draft decisions before they are able to initiate their own proceedings against the companies.

In July, Ireland’s Parliament, the Dail, published a report in which it suggested the DPC was in need of urgent reform, arguing that “citizens’ fundamental rights are in peril”.

JUST IN: Sturgeon savaged over ‘shallow’ defence of ‘disgraceful’ Godley

The issue is causing tension with other members of the EU27, with Ulrich Kelber, chief of Germany’s chief data protection watchdog, recently telling the European Parliament he had “sent more than 50 complaints about WhatsApp” to the Irish authorities, “none of which had been closed to date”.

In May, the European Parliament adopted a resolution calling on the European Commission to initiate infringement procedures against Ireland, over the lack of GDPR enforcement.

A total of 541 MPs voted in favour, with just one against, while 151 members abstained.

The motion “expresses deep concern that several complaints against breaches of the GDPR filed on 25 May 2018, the day the GDPR became applicable, and other complaints from privacy organisations and consumer groups, have not yet been decided by the DPC, which is the lead authority for these cases.”

Furthermore it voices concern “that the DPC interprets ‘without delay’ in Article 60(3) of the GDPR – contrary to the legislators’ intention – as longer than a matter of months”.

Additionally, the motion points to “the lack of tech specialists working for the DPC and their use of outdated systems”, “deplores the implications of the unsuccessful attempt by the DPC to shift the costs of the judicial procedure on to the defendant, which would have created a massive chilling effect”, and “calls on the Commission to start infringement procedures against Ireland for not properly enforcing the GDPR”.

No enforcement proceedings have yet been launched, with Express.co.uk having contacted the Commission to ask whether it will happen.

In subsequent events, the DPC earlier this month announced a record-breaking £192million (€225million) fine against WhatsApp Ireland for General Data Protection Regulation (GDPR) violations – by far the biggest it has ever handed out.

It also issued a reprimand and ordered WhatsApp, a Facebook subsidiary, to bring its data processing practices into compliance by adopting “a range of specified remedial actions”.