The bloc of European Green politicians criticised the chief eurocrat-in-waiting after a meeting in Brussels yesterday. Ms von der Leyen was branded “disappointing” and accused of “ignoring the climate emergency” after making her pitch to the 74 Green MEPs in the European Parliament. The move to reject the German defence minister, 60, from taking over Jean-Claude Juncker’s role could plunge the EU into a fresh crisis.

Ska Keller, co-leader of the Greens, blast: “The statements of Ursula von der Leyen were disappointing. We did not hear any concrete proposal, be it on rule of law or on climate.

“We have been elected on a mandate for change and we don’t see how change will be possible with this candidate.

“The president of the European Commission needs to be the guardian of the rule of law and European values.

“Ursula von der Leyen evaded our questions on the rule of law and democracy in Europe. This is a major shortcoming on one of the main questions that the EU is confronted with.” 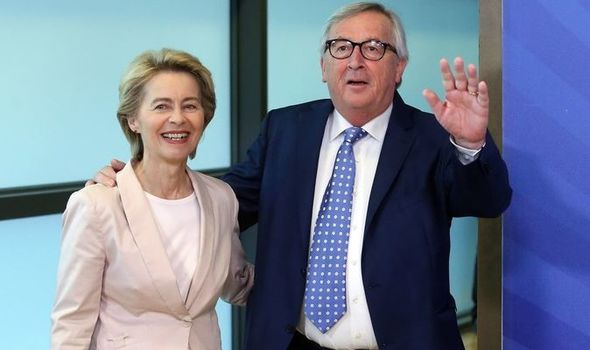 Philippe Lamberts, the group’s second co-leader, said: “Only a few weeks after the climate elections, she is ignoring the climate emergency and even wants to aim for lower climate targets than previously agreed by the European Parliament. Ms von der Leyen is simply not a Commission president that the Green group can support.”

The Belgian MEP urged EU leaders to go back to the drawing board and find a “democratic and transparent process” to electing the bloc’s top official.

“We insist that the voters deserve a democratic and transparent process when it comes to the choice of Commission president. The lead candidate process has not been respected which is a betrayal of the European electorate.”

The Parliament’s European United Left group have also pledged to vote against Ms von der Leyen as opposition to her presidency builds.

The group’s acting president, Martin Schirdewan, said: “We realise she does not have a vision that is based on social justice and on human rights. She will perpetuate the neoliberal policies that have led to the economic crisis and unprecedented poverty and inequality among Europeans. We saw little desire to tackle tax avoidance and fraud by big corporations.”

“We are also concerned about the militarisation of the EU that von der Leyen is proposing. Her legacy in Germany is of arms to Saudi Arabia and support for military intervention. Likewise, no credible proposals to reform the EU asylum system and end the shameful deaths in the Mediterranean.”

MEPs will vote on Ms von der Leyen’s presidency bid at the European Parliament in Strasbourg next week.

The 60-year-old needs to secure at least 376 votes for a majority, but Brussels insiders believe she is still short of the required numbers.

Ms von der Leyen has now met with all the Parliament’s political groupings in the hope of convincing them to support her.

Addressing the groups, she called for the expansion of the borderless Schengen travel area, the enlargement of the Eurozone and closer military cooperation.

On Brexit, Ms von der Leyen described herself as a “Remainer” and expressed her desire for Britain to remain in the EU.

The German also dealt a significant blow to Boris Johnson and Jeremy Hunt by vowing to defend the controversial Northern Ireland backstop.

The Tory leadership contenders have pledged to scrap or change the backstop after MPs voiced concerns that Britain could be permanently trapped inside the EU’s customs union.

Ms von der Leyen said: “We absolutely know how crucial this nonexistent border for you is, and therefore having the backstop in the Brexit deal is precious, important and has to be defended.”