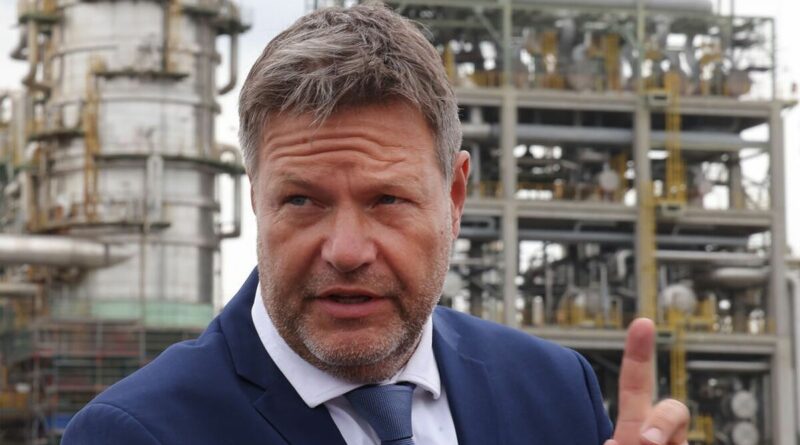 Russian TV host claims the EU is a 'branch of NATO'

Economy minister Robert Habeck made the claim when speaking to German broadcaster ZDF. Mr Habeck’s claim comes after significant opposition to the move from countries that are reliant on Russian oil, such as Hungary.

He said: “We will reach a breakthrough within days.”

Brussels has come under pressure from Kyiv to restrict imports of Russian oil.

Many of the bloc’s 27 members are heavily dependent on Russian supplies, particularly Germany, Italy and Hungary.

Hungary is demanding energy investment before it agrees to support an embargo.

This has meant that Budapest has clashed with other EU states who are pushing for an immediate ban.

Around 25 percent of the EU’s oil currently comes from Russia and Brussels is hoping to phase out all supplies in the next six months.

It comes as Russian Foreign Minister Sergei Lavrov has said that the Kremlin will focus on developing economic links with China rather than the West.

In a speech Mr Lavrov accused the West of taking the “dictator’s position”.

He said: “If they (the West) want to offer something in terms of resuming relations, then we will seriously consider whether we will need it or not.

“Now that the West has taken a ‘dictator’s position’, our economic ties with China will grow even faster.”

Ukrainian President Volodymyr Zelensky called on Monday for Ukraine’s allies to put pressure on Russia to accept a prisoner exchange.

Speaking in a question-and-answer video link with the audience at the World Economic Forum in Davos, Mr Zelensky said it was a “humanitarian matter.”

He said: “The exchange of people – this is a humanitarian matter today and a very political decision that depends on the support of many states.

“We do not need the Russian servicemen, we only need ours.

“We are ready for an exchange even tomorrow.”

US President Joe Biden has also insisted that the war in Ukraine is a global issue when speaking at the meeting of the “quad” of Indo-Pacific leaders.

He said: “This is more than just a European issue. It’s a global issue.

“International law, human rights must always be defended regardless of where they’re violated in the world.”