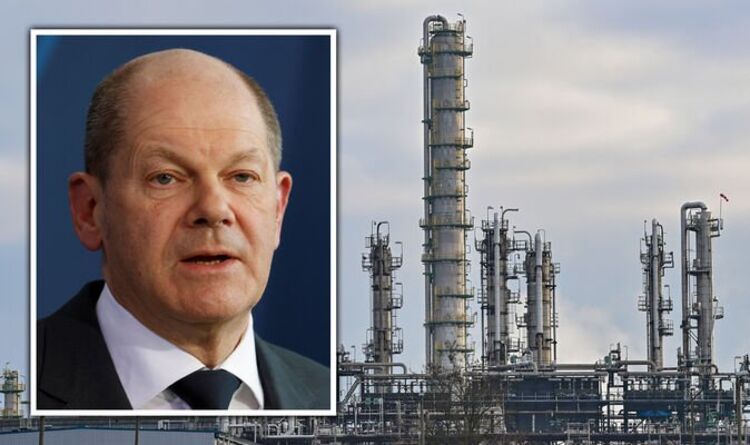 The German Chancellor has pushed back against energy sanctions on Russia over the invasion of Ukraine. Now, Mr Scholz has explained an immediate ban on Russian energy would trigger an economic recession in Germany and across Europe.

Speaking to the Bundestag, Mr Scholz said Germany would end its energy dependence on Russia in due course, but cutting all ties now would hit the German economy when it was unprepared.

He said: “We will end this dependence [on Russian oil, coal and gas] as quickly as we can, but to do that from one day to the next would mean plunging our country and all of Europe into a recession.”

The Chancellor then warned “hundreds of thousands of jobs would be at risk, entire industries would be on the brink” should an immediate ban be put in place.

He said: “The truth is that the sanctions that have already been decided also hit many citizens hard, and not just at the gas pump.”

Mr Scholz continued by arguing sanctions “must not hit the European countries harder than the Russian leadership”.

The Chancellor also noted Germany has already begun the process of moving away from Russian energy dependence.

He said: “In the short term, we are securing additional sources of gas, oil and coal … We are diversifying our supply sources, already in the coming months.

“In doing so, we’re building on the existing liquid natural gas terminals on the European west coast, and we will build our own LNG terminals much faster than we have until now.”

Ahead of the Russian invasion of Ukraine on February 24, Germany announced it had stopped the certification process for the controversial Nord Stream 2 gas pipeline.

Mr Scholz said at the time: “This may sound technical, but it is the necessary administrative step without which the pipeline cannot be certified.

“Without this certification Nord Stream 2 cannot go into operation.”

The Chancellor said the move was over Vladimir Putin’s recognition of the Russian-controlled self-proclaimed republics in Luhansk and Donetsk in east Ukraine.

He regarded them as a “grave breach” of international law which broke with decades of agreements between Russia and the West.

The EU buys around a quarter of their oil and more than 40 percent of their gas from Russia.

According to the International Energy Agency, the EU bought 155 billion cubic metres of Russian gas in 2021.

Data from the US government show that, in the same year the EU bought 2.3 million barrels a day of Russian oil, for almost half of Russian exports.

According to European Central Bank estimates, a 10 percent gas shortfall will trigger a 0.7 percent contraction in GDP.

It comes after Boris Johnson held a summit with nuclear industry leaders as part of an expansion of energy plans.

The Prime Minister said at the Conservatives’ spring conference: “We must take the bold steps necessary to end our dependence on Putin’s oil and gas. And that’s what we are doing.

“In the immortal phrase, it is time to take back control of our energy supplies. After years of short-termism and hand to mouth solutions, we are setting out a British energy security strategy.

“And we will make better use of our own naturally occurring hydrocarbons, rather than import them top dollar from abroad and put the money into Putin’s bank account.

“And we’re going to take that bull-at-a-gate spirit of the booster rollout and use it to build more offshore wind.”