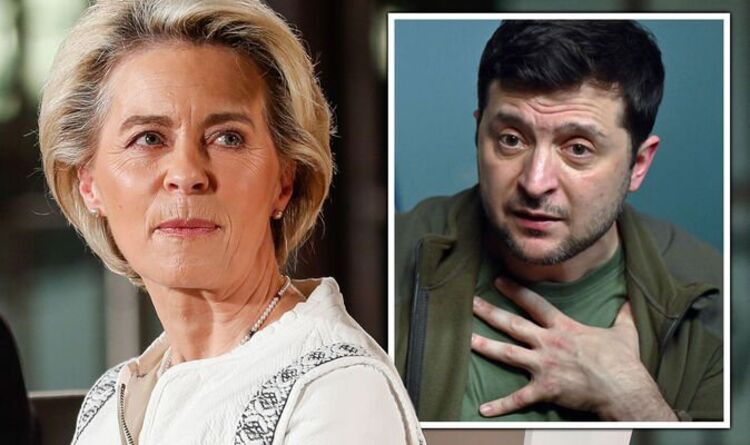 With the war well into the second week, calls by Ukraine to join the bloc have been met with mixed reactions by the EU, with some nations calling for accelerated membership, whilst others call for a more cautious approach. Last week, in an Express.co.uk exclusive, one leading academic suggested membership of Ukraine to the EU would solely be a “symbolic gesture” and would not change the situation on the ground.

EU countries’ permanent representatives are meeting this morning to discuss Ukraine’s bid to become an official candidate for membership of the bloc.

While EU officials went to lengths to highlight the Council had instructed the Commission to prepare an opinion in less than a week, compared to the months this step usually takes, there will be no firm commitment to speed through the process.

According to a briefing in Politico, the news does not look good for Mr Zelensky as the message emanating from the EU is negative.

It said: “Instead, the communiqué contains vague language promising to “further strengthen our bonds and deepen our partnership.”

As one senior Commission official told Playbook: “They are trying to find a way to say no.”

This has been reflected by other EU officials.

EU affairs secretary of France, which currently holds the rotating Council presidency, said Ukraine’s accession should be examined “with openness and prudence,” insisting it was a “long-term” question.

France has also sought to find a middle ground solution to the problem.

Speaking of the idea, Mr Beaune said: “We will undoubtedly need a union with several formats.

“Ukraine could find its place in it if we move away from the traditional schemes such as association agreements, partnerships … which no longer meet the European aspirations of the Ukrainian people.”

Aside from joining the EU, Ukraine has also called for membership to NATO, and more recently, has appealed for a no-fly zone to be implemented above the skies of Ukraine.

A no-fly zone has been met with fierce resistance by Western leaders who fear engagement with Russian aircraft will instigate a wider conflict.

On Wednesday, Foreign Secretary Elizabeth Truss rejected the push to establish a no-fly zone over Ukraine, even a limited one to protect humanitarian corridors.

Speaking alongside her US counterpart Anthony Blinken, Ms Truss said: “The reality is that setting up a no-fly zone would lead to a direct confrontation between NATO and Russia.
“And that is not what we are looking at.

“What we are looking at is making sure that the Ukrainians are able to defend their own country with the best possible selection of anti-tank weapons and anti-air defence systems.”

Earlier in the day, the UK said it was exploring plans to supply air defence systems to Ukraine – a move Ms Truss confirmed during the news conference. She said the British government would “help the Ukrainians with the Starstreak air defence systems we will be supplying”.

Should Ukraine be given rapid membership to the European Union? Will Ukraine join NATO? Should Britain send troops to help defend Ukraine? Let us know your thoughts on these pressing questions by CLICKING HERE and joining the debate in our comments section below – Every Voice Matters!

Mr Zelensky has repeatedly condemned NATO for not assisting with a no-fly zone.

In angry comments, the Ukrainian President said: “All the people who will die starting from this day will also die because of you.

So far, Western powers have instead imposed punitive economic measures against Russia, as well as assisting Ukraine with humanitarian aid.