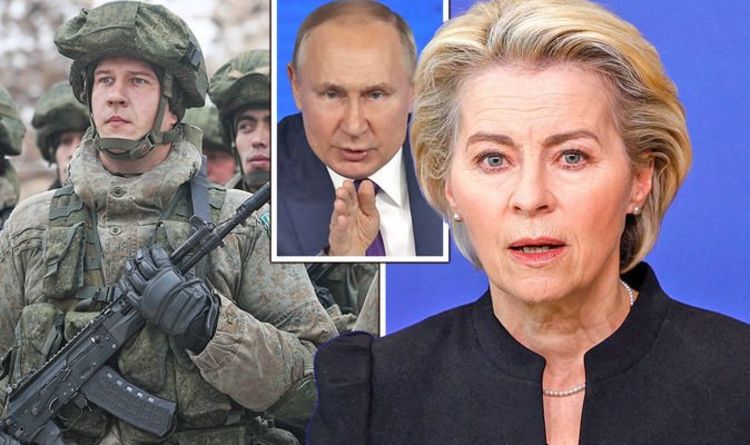 Negotiations between Russia and the West have failed to make any headway, with US-Russia negotiations in Geneva last week stalling with little to show for diplomatic efforts. NATO and its allies have become increasingly anxious with the Russian military buildup that military chiefs warned could herald a Moscow-led takeover of Ukraine. Intelligence reports revealed Russia has amassed around 100,000 troops on the border, but the Kremlin has consistently denied any intention to invade the ex-Soviet state.

But while the US and the UK have been vocal in their condemnation of Vladimir Putin’s strategic moves, the European Union has drawn criticism for its tight-lippedness on the escalating tensions.

Tom Tugendhat, chair of the parliamentary Foreign Affairs Committee, said the EU’s muteness reflected badly on the bloc’s unity, and its reliance on Moscow for energy supplies.

“Is the EU so divided that it can’t meet the most important security challenge in a generation?

“Is Europe’s energy dependence on Moscow undermining its own interests?

“Or has Moscow’s capture of so many European elites – including some of our own – left leaders unwilling to act when defence would cost them personally?”

He added that backing down from President Putin could make open conflict more likely, saying: “Brussels’ confused silence leaves a gap where policy should be.

“Russia has already forced Ukrainians to flee from the east.

“How many more will cross as refugees into the 27-member bloc if Moscow orders the invasion?

“That’s why Berlin’s decision on Friday to stop Estonia selling German-made weapons to Ukraine was a mistake.

“Coming after US President Joe Biden’s blundering statement that a small incursion may not attract a response, it makes Nato look confused.

“Looking weak will not prevent war, but encourage it.”

He finished in his piece for The Telegraph: “For the first time in a generation we’re on the brink of war in Europe.

“We need to be strong, not to threaten Moscow, but because only strength can stop them.”

Germany blocked Estonia from selling weaponry made by Europe’s largest economy to Ukraine last week, although Washington approved the sending of US-made weapons from Estonia to Ukraine.

US President Joe Biden sparked backlash after suggesting during a news conference on Wednesday that should Russia launch a smaller-scale incursion into Ukraine rather than a fully-fledged invasion, they could see less stringent counter-movements from NATO.

White House press secretary, Jen Psaki, quickly clarified that “if there is a movement of any military troops across the border, that is an invasion”.

In a speech on Wednesday, French president – and rotating EU president – Emmanuel Macron, said a proposal for “building a new security and stability order” would be put to Russia by the bloc in the next few weeks.

He added: “We will make sure that Europe makes its unique and strong voice heard.”

“We must put together a joint proposal, a joint vision, a new security and stability order for Europe.”

However, the EU has taken a back seat in de-escalating tensions over Ukraine compared to the US and the UK, with Foreign Secretary Liz Truss preparing for a trip to Moscow next month.

In an unequivocal address to a G7 congregation in Sydney last week, Ms Truss called any possible invasion “a massive strategic mistake” and warned the Kremlin to learn “the lessons of history”.

She said of the Russian leadership: “They dream of recreating the Soviet Union, or a kind of greater Russia, carving up territory based on ethnicity and language.

“They claim they want stability while they work to threaten and destabilise others.”

While at once urging President Putin to “desist and step back from Ukraine”, she reiterated the importance of UK ties with NATO and countries like Australia.