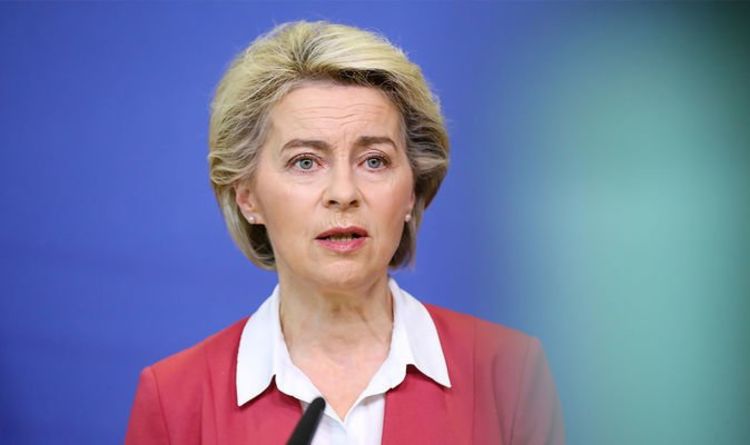 EU: Expert discusses the 'future' of the 'peace project'

The coronavirus pandemic has thrown the bloc into disarray. Many member states now face increasing pressure from their citizens over blanket policies on the coronavirus pandemic. Thousands have taken to the streets in cities across the continent in recent months to voice outrage at COVID-19 health passes, with the EU having backed a digital certificate.

Not only has the pandemic sparked unrest, it has also changed the way the bloc works.

It marked the first time shared debt had been agreed on, going against the EU’s predecessors, the European Economic Community, founding principle that the bloc would never collectivise debt.

The move will likely change the face of the bloc and sets a precedent for future policy.

While today’s circumstances are unforeseen, almost a decade ago, Barbara Kolm, an Austrian economist, predicted that the EU “as we know it now”, in 2013, would not exist by 2023.

She told ReasonTV: “The EU is the biggest and most expensive peace project, but eventually it will not keep pace.

“It will start social unrest.

“When these things pop up, people will rethink the EU.

JUST IN: Taliban execute woman ‘for not wearing burka’

“The Union as we know it now will not exist in ten years.”

Several crises have hit the bloc since Ms Kolm made her forecast.

Perhaps the biggest was Brexit, when Britons voted to leave the EU in the Brexit referendum – though many say the groundwork had been laid for a Brexit victory years before.

Without the UK, experts have suggested EU foreign policy could be less influential.

The US saw the UK as a bridge between itself and Europe.

The Centre for European Reform noted that the EU without a firm UK could move to sympathise with Russia, relaxing sanctions pushed by the US.

Along with Brexit came the sentiment that countries in Europe who had been tired of Brussels bureaucracy might themselves push for a membership referendum.

Strong eurosceptic movements sprouted in nations from France to Sweden, Italy to Germany, in the aftermath of the vote.

Yet, the same can be said for the reverse: the ballot, according to Tim Bale, professor of politics at Queen Mary University, “made some Europeans, who’d maybe forgotten quite how important the EU was to them, realise its value”.

Closer integration might be welcomed by those on the continent who have seen the fallout as divisive.

Another damning event for the EU was the migrant crisis of 2015.

As thousands took perilous journeys across the sea and walked to Northern Europe from war torn Syria and other unstable countries, the bloc voted to expand its multinational sea rescue operation, Triton.

But a byproduct of this was a surge in support for far-right parties in Europe, leaders from Hungary’s Viktor Orban to the Alternative for Germany (AfD), to Italy’s Lega making opposition to migration a key electoral issue.