The warning comes from Poland’s deputy Foreign Minister Pawel Jabloński who told Sky News the European Union is at risk of losing “international credibility” over the Belarus issue. He said: “They do not feel the threats of potential further coalition or subjugation of Belarus under Russia.

“And we here in Central Europe, in Poland, in Lithuania and other member states, we feel it on an every day basis.

“So the European Union has the ambition to be a global power, resolving global conflicts in Africa, in the Middle East, which is of strategic importance of course for our security.

“But it needs to react here as well because otherwise it will deal with a great blow to the international credibility of the European Union.

“So I do hope that we will be able to react because this is something that Belarus nationals deserve, that we do not leave them alone.” 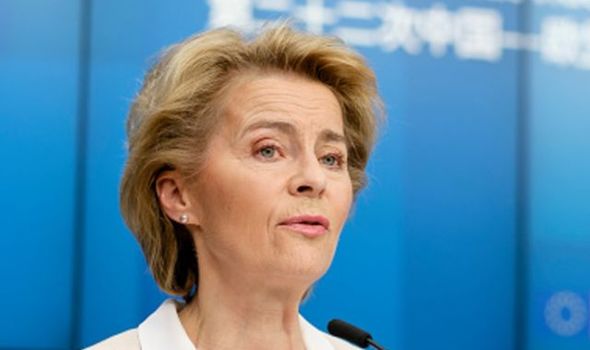 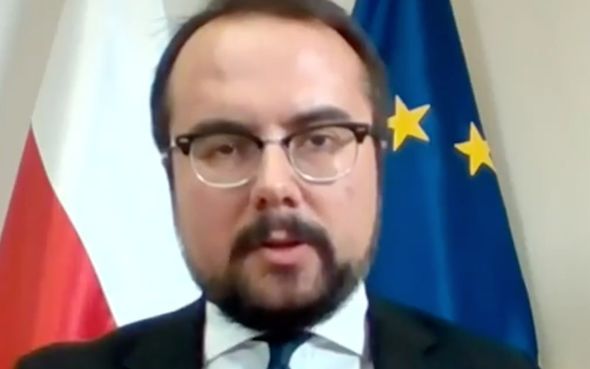 Belarusian authorities on Thursday began releasing some of the thousands of people detained in a crackdown by strongman President Alexander Lukashenko that has prompted the European Union to consider imposing sanctions.

Some of those released in the capital Minsk had bruises and described being tightly packed inside cells and complained of mistreatment, including beatings.

A spokeswoman for the interior ministry declined immediate comment.

People outside the Okrestina detention centre, some in tears, waited in the hope of gleaning news of friends and relatives inside. Police and soldiers with machine guns drove them away when they got too close to the entrance.

The government said that 700 more people had been detained in a fourth night of clashes on Wednesday between police and protesters.

Demonstrators say Lukashenko swindled the election to extend his 26-year-long rule of the eastern European country.

Lukashenko, alleging a foreign-backed plot to destabilise the country, has dismissed them as criminals and unemployed people.

Sergei, one of the freed detainees, said there had been 28 people in a cell that would normally contain five. Prisoners took turns to sleep, he said, and were given a single loaf of bread to share out over two days.

“They did not beat me in the cell, they took me out of the cell and beat me there,” said Sergei, who declined to give his last name.

A new round of street protests began on Thursday with people forming human chains on the streets of Minsk.

DON’T MISS:
‘EU helps Belarus dictator while fighting UK at every turn’ [COMMENT]
Belarus election: Is Belarus in the EU? [INSIGHT]
EU ordered to wade in after allegations of election fraud in Belarus [ANALYSIS] 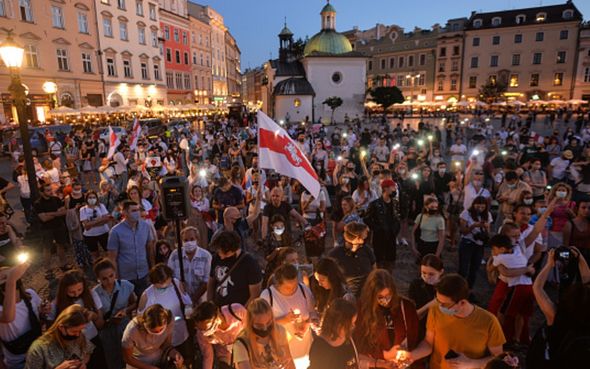 In a town northeast of Minsk, workers from state-run haulage and earthmoving equipment manufacturer BelAZ walked out of the factory in solidarity with the protesters.

The EU partially lifted sanctions, imposed over Lukashenko’s human rights record, in 2016, but will weigh new measures against him and allies on Friday.

A former Soviet collective farm manager, the 65-year-old Lukashenko has ruled Belarus for more than a quarter of a century but faces increasing anger over his handling of the coronavirus pandemic, a sluggish economy and human rights.

Michelle Bachelet, the United Nations human rights chief, has condemned the detention of 6,000 people by police, “including bystanders, as well as minors, suggesting a trend of massive arrests in clear violation of international human rights standards”.