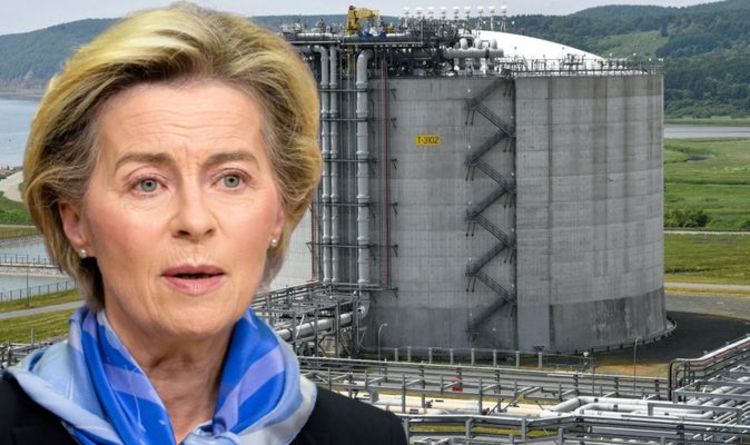 Some analysts suggest that should the winter prove to be particularly harsh, supplies could dry up as soon as February. Near record-high energy prices have put 25 retail suppliers out of business and meant soaring bills for households.

The UK’s ‘Bulb’, Britain’s seventh biggest energy supplier, formally entered into administration – becoming the biggest victim so far of the crisis in the industry and leaving taxpayers with a £1.7bn bill.

Further spikes in wholesale prices are expected in the coming weeks as temperatures drop.

Graham Freedman, principal analyst at Wood Mackenzie said: “If we have a cold winter we could run very, very low on European storage.”

The analyst added: “Especially if Asia has a cold winter as well because that would take more liquefied natural gas out of the market,” when speaking to The Independent.

So-called cushion gas is held at storage sites across the continent but is never normally used because extracting it poses safety risks and could permanently damage the underground reservoirs where gas is kept.

A certain level of gas is needed to maintain pressure in the wells at all times.

Mr Freedman said: “These are exceptional circumstances… There is an additional reserve sitting in the ground that isn’t normally considered. It has only been used at a very small scale in the past.”

Predicting the future, the expert said: “The difference here is that we are potentially looking at quite a large scale. If everything goes wrong, we could be using it by February.”

Around 83 billion cubic metres (bcm) are in storage, compared to an average of 97bcm at this point in the past five years.

Using 10 percent of the continent’s cushion gas would free up another 15bcm, potentially averting a situation where storage runs empty, according to Wood Mackenzie’s calculations.

Wood Mackenzie’s team of analysts suggested that if storage runs close to zero, governments may have to relax rules to allow companies greater freedom to use cushion gas.

A source at one major UK storage company did not rule it out.

They said: “There are protections in place because of the potential safety impact on site. Cushion gas is fundamental to integrity of the salt caverns where gas is stored.”

Guy Smith, an energy trader at Vattenfall expressed scepticism about using cushion gas and said only a relatively small amount could be accessed.

He said: “The storage won’t run out. There will always be enough gas but prices will have to optimize.”

He added: “With low storage levels you can expect prices to jump up and down a lot over the winter.”

Many have placed the blame for the shortages at the feet of Russia and President Vladimir Putin, who is said to be politicising the situation.

EU officials claim that Russia is deliberately slowing the flow of gas over an ongoing dispute of the legitimacy and opening of the second Nord Stream pipeline.

Kremlin spokesman Dmitry Peskov has denied that Russia is involved in such acts.

For Britain, it has sought alternative sources of gas.

The UK has held talks with Qatar over a long-term gas arrangement that would make the Gulf state a “supplier of last resort”, according to people briefed on the discussions.

In a bleak outlook, one gas trader said: “If flows don’t pick up and there is a cold snap, or low wind speeds, we could see crazy prices again. We are living hand to mouth.”