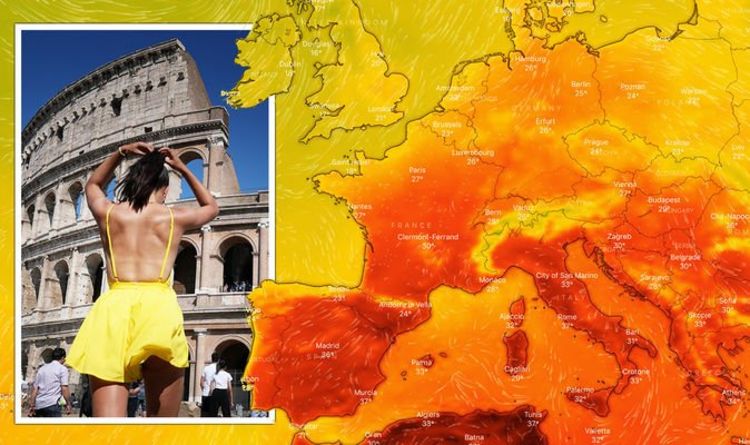 Regional authorities reported the record-breaking reading on the Italian island of Sicily, topping the previous European record of 48C which was registered in Athens, Greece, in 1997. The latest heatwave to bake the continent has been caused by an anticyclone pushing northwards from Africa. The anticyclone, aptly nicknamed Lucifer, is forecast to continue creeping across mainland Italy over the coming week, pushing the heat into the capital, Rome.

Italian firefighters reported being involved in more than 300 operations in Sicily and Calabria over the course of only 12 hours.

In scenes which closely resemble those seen in Turkey and Greece last week, thousands of acres of Italian land were scorched by wildfires caused by the extreme heat.

Three fire-related deaths have been reported in Italy so far.

Meteorologists expect the searing temperatures to continue over the next few days and into the weekend.

Marko Korosec, lead forecaster at Severe Weather EU, said: A massive heat dome is expected to lock in the weather pattern across the southern parts of the continent, centred over the Mediterranean.”

He warned the heat would continue “for several days and worsen the ongoing significant drought conditions as well as becoming even more favourable for dangerous wildfire threats.”

This live map, courtesy of Windy.com, illustrates the hottest areas of Europe in real time: