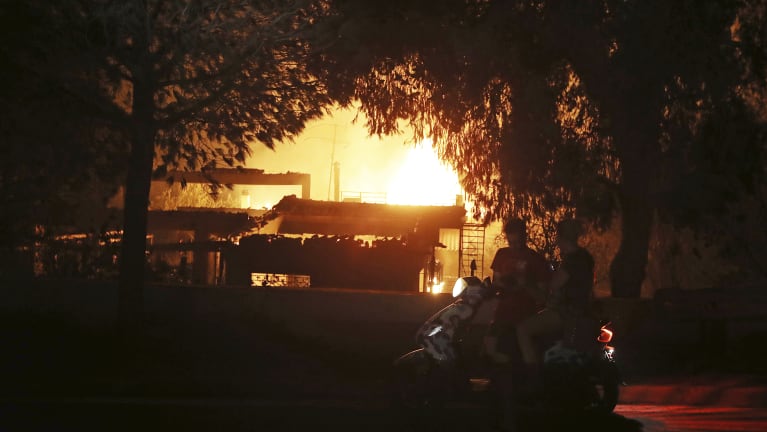 A house burns in the town of Mati, east of Athens.

Greece is facing its worst fire crisis in more than 10 years as blazes rip through two coastal resorts popular with holidaymakers from the capital Athens, killing at least 49 people.

The wildfires also injured more than 150, including 16 children. Eleven of those are in a critical condition and the fire department says the death toll is expected to rise.

The fires are the worst since 2007, when record-high temperatures led to a series of blazes across the country killing at least 73 people.

The casualties from this week's wildfires were concentrated around Mati, a coastal settlement in north-east Attica, and were stoked by heavy winds, which spread the flames in the dry conditions. 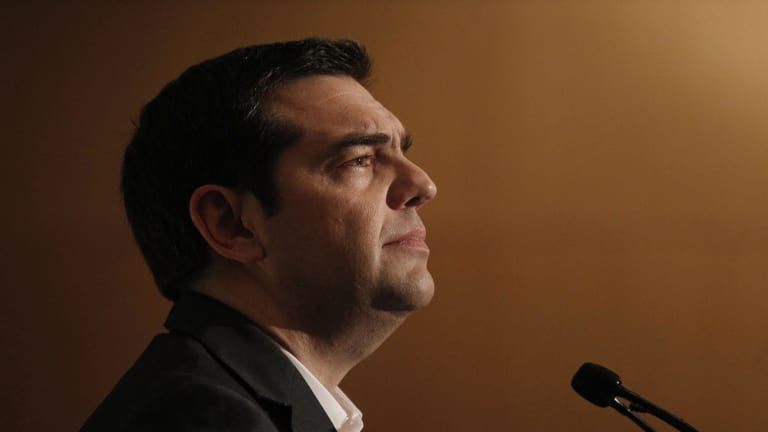 "Greece is going through one of its hardest moments," Prime Minister Alexis Tsipras said in a televised address on Tuesday, declaring a three-day period of national mourning.

"Today Greece is in mourning, but we cannot allow grief to overcome us."

The country is awaiting 60 firefighters from Cyprus and two water-bombing planes from Spain, the fire department's spokeswoman said.

"Europe will stand by our Greek friends in these difficult times. Help is on its way from several EU countries," European Council President Donald Tusk said in a tweet.

Italy, Spain, Germany and Croatia have offered help as has Turkey. 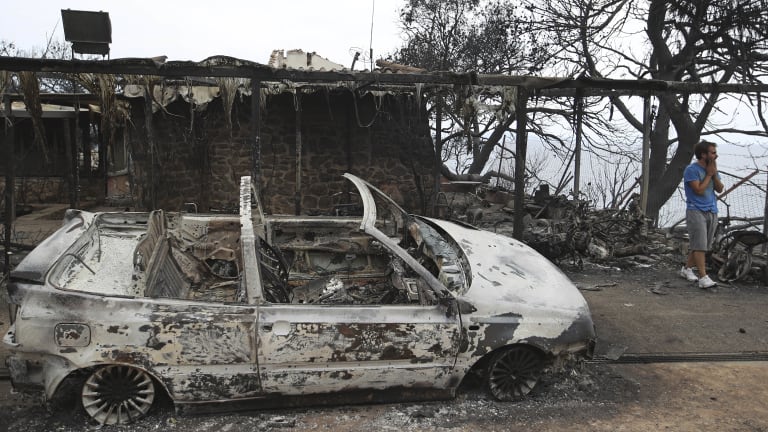 A burnt-out car near Mati.

And a survivor of a wildfire has told how he plunged into the sea to escape the flames, only to be swept away by the current and see others around him drown.

The survivors were rescued by a fishing boat with an Egyptian crew.

Nikos Stavrinidis had gone to his summer home in the Mati area near Rafina with his wife to prepare it for his student daughter who was coming to stay. Before he knew it, the fire surrounded him.

"It happened very fast. The fire was in the distance, then sparks from the fire reached us. Then the fire was all around us," Stavrinidis said.

"We ran to the sea. We had to swim out because of the smoke, but we couldn't see where anything was."

There were six people in his group: Stavrinidis, his wife and some of her friends. They swam further out to escape the smoke, but as they did so, they began to be carried away by the wind and the current. They lost sight of the shore and became disoriented. "We couldn't see anything," he said.

Gale-force winds fanning the flames in the area also hampered firefighting efforts and whipped up the seas.

"We didn't all make it," Stavrinidis said. One of the women in his group and one woman's son drowned.

"What upsets me and what I will carry in my heart is that it is terrible to see the person next to you drowning and not be able to help him. You can't. That's the only tragic thing," he said, his voice breaking. "That will stay with me."

Stavrinidis said he believed they were in the water for about two hours before being picked up by a fishing boat with an Egyptian crew.

"I'm grateful to all of them," he said. "They jumped into the sea with their clothes still on. They made us tea and kept us warm. They were great."