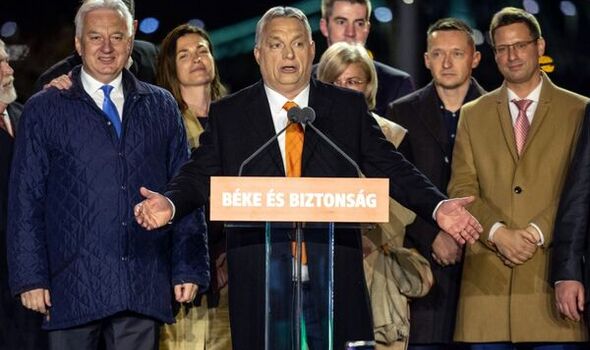 Viktor Orban, who was first elected as Hungary’s Prime Minister in 2010, told supporters in the capital city Budapest that “this was a huge victory”.

Orban has been accused of being an ally to Russian President Vladimir Putin and even used his victory speech to tear into Ukraine leader Volodymyr Zelensky.

He said: “We will remember this victory until the end of our lives because we had to fight against a huge amount of opponents.”

This included the Hungarian left, Brussels “bureaucrats” and “the Ukrainian President”.

Speaking about his victory, Orban added: “They can see it from the Moon, but certainly from Brussels as well.”

The Fidesz party received 53.1 percent of the vote at a time when 99 percent of ballots had been counted, according to Europe Elects.

An opposition alliance led by Peter Marki-Zay trailed in a distant second place on just 35 percent.

Mr Orban increased his vote share by 3.8 percent, despite concerns war in Ukraine could derail his re-election bid.

In comparison, the opposition coalition’s share of the vote dropped by more than 11 points.