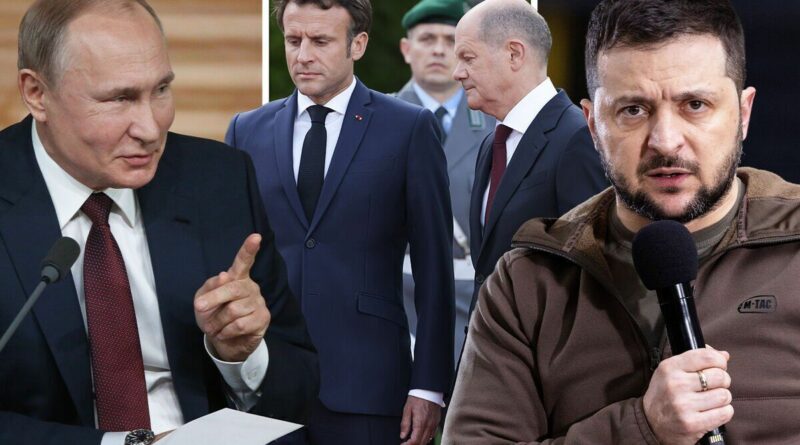 Zelensky asks for more respect from the European Union

Nearly three months after Russia invaded Ukraine, the world remains stunned that Moscow’s forces have been unable to achieve any of their military objectives. At the start of the war, many experts feared the capital Kyiv could fall in a matter of days. While Russia has inflicted huge damage on major cities, its ground forces have been pushed back by Ukrainian soldiers in many areas of the country. Other setbacks for the Kremlin have included the deaths of generals and the sinking of its flagship – The Moskva – in the Black Sea.

Ukraine’s recent success in pushing Russian troops out of some occupied territory has prompted leaders from France, Germany and Italy to prepare for an unexpected Ukrainian victory.

As a result of Ukraine’s successful defence, leaders in the EU are now reportedly concerned about what could happen if Russian President Vladimir Putin suffers defeat.

Western officials have said they fear what French President Emmanuel Macron last week called a “humiliation” of Russia, and would prefer a “face-saving” resolution to the conflict, even if it costs Ukraine some territory.

Mr Macron called for peace last week, saying “We are not at war with Russia” in an address to the European Parliament.

He stressed that it’s Europe’s “duty to stand with Ukraine to achieve a ceasefire, then build peace.”

German Chancellor Olaf Scholz has also called for a ceasefire in recent days.

However, during Mr Scholz’s phone call with Putin, demands for Russia to withdraw its troops from Ukraine was notably absent from the conversation, according to a report of the call published by Politico.

After meeting with US President Joe Biden in Washington last week, Italian Prime Minister Mario Draghi also said it was time to start thinking about a peace deal.

He said: “We agreed that we must continue to support Ukraine and put pressure on Moscow, but also begin to ask how to build peace.

“People … want to think about the possibility of bringing a ceasefire and starting again some credible negotiations. That’s the situation right now. I think that we have to think deeply on how to address this.”

But Ukrainian President Volodymyr Zelensky has maintained his demand for Moscow’s forces to get out of his country.

He also appeared to reject European leaders’ idea of a face-saving peace deal.

Mr Zelensky said in an interview with Italy’s RAI public broadcaster last week: “We want the Russian army to leave our land – we aren’t on Russian soil.

“We won’t help Putin save face by paying with our territory. That would be unjust.”

Mr Zelensky also said Mr Macron was looking “in vain” for “a way out for Russia.”

Ukrainian officials have argued since the start of the war that any concessions on territory – relating to Crimea or the two separatist backed regions in the east – would only encourage Russia to make further incursions onto Ukrainian land in the future.

Desperate Putin and Russia forced to use ‘indiscriminate bombardment’

A senior US official has admitted that differing views in the EU could be an issue but believes the bloc will ultimately unite to help Ukraine.

They told Politico: “Of course we worry about a fracture, but I think allies also understand what’s at stake here.

“Look at the EU. They have argued over Russian oil and gas for years, but suddenly they think they can get to a ban? That’s historic.”

He added: “The whole EU, after this initial phase when we helped with military aid, should concentrate on negotiations and applying pressure for a political solution.”

While it was important that Europe not “lower its guard” vis a vis Putin, Mr Conte said the EU also shouldn’t lose sight of a basic reality: “Russia is there and will remain there.”