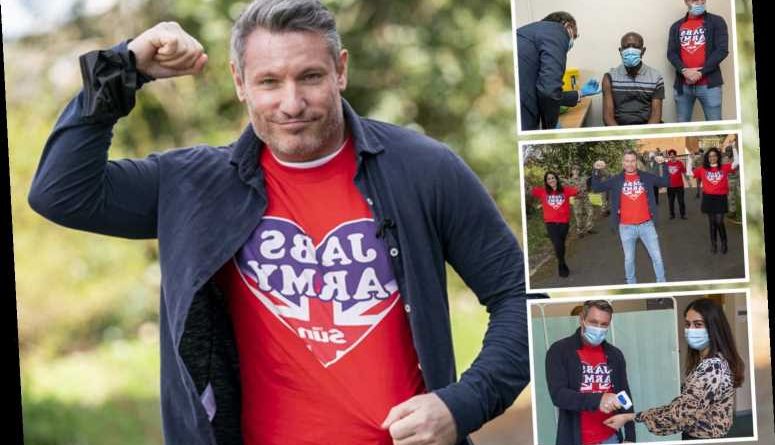 HE tackled the jungle creepy crawlies in I’m A Celebrity but there is one thing that really does leave Dean Gaffney quaking – needles.

So the former EastEnder had to put on his brave face as he joined The Sun’s Jabs Army and supported a patient while they had their first Covid vaccination. 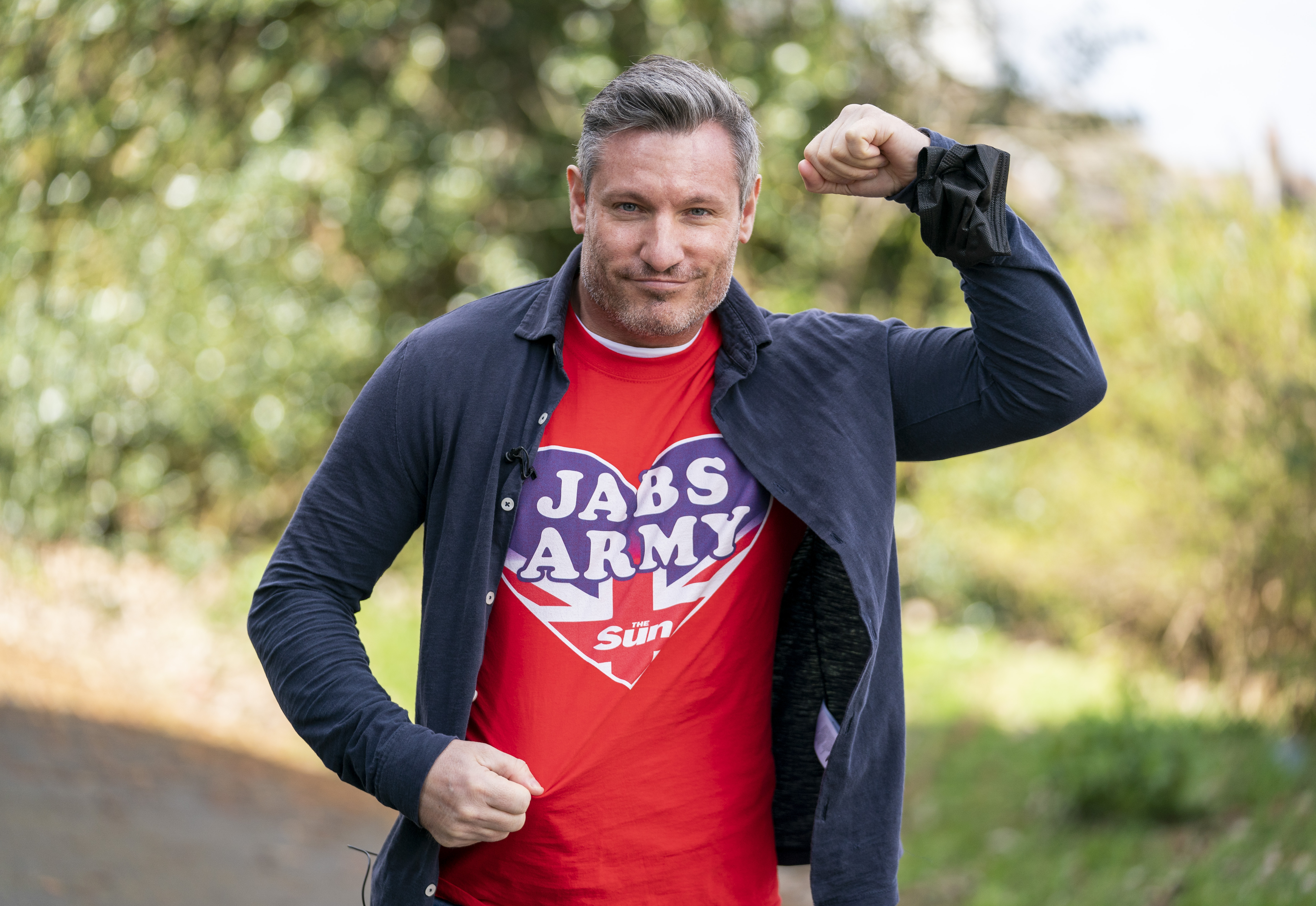 But as the needle slid into Ramos Cosia’s arm, Dean — who played Robbie Jackson in the BBC1 soap — couldn’t help grimacing during his volunteering shift at Plumstead Vaccine Centre in South London.

After meeting his fellow helpers, the 43-year-old actor, whose squeamish Bushtucker Trials in the 2006 I’m A Celebrity are the stuff of legend, said: “I’m really scared of needles but when I’m offered my jab I will get it, especially if all the volunteers are this lovely.”

The centre gives out 600 jabs a day and is this week on course to have administered 20,000 since it started in December.

Dr Anuj Chaturvedi, a GP and Clinical Director of Heritage Primary Care Network, told Dean: “The jab itself takes less than 30 seconds. It’s the preparation and aftercare that can take a lot longer.

“If you have the Pfizer jab we have to keep you under observation for at least 15 minutes. 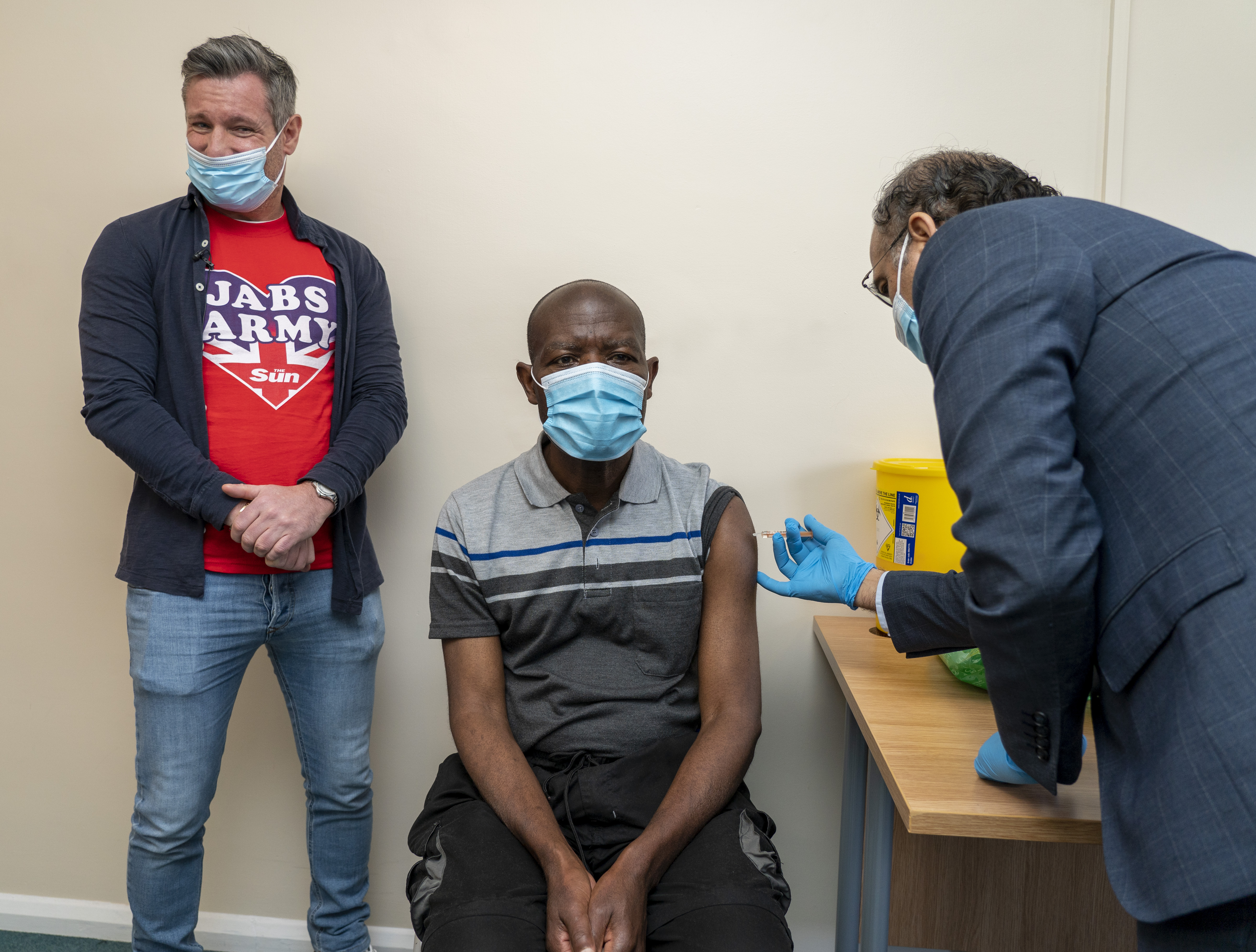 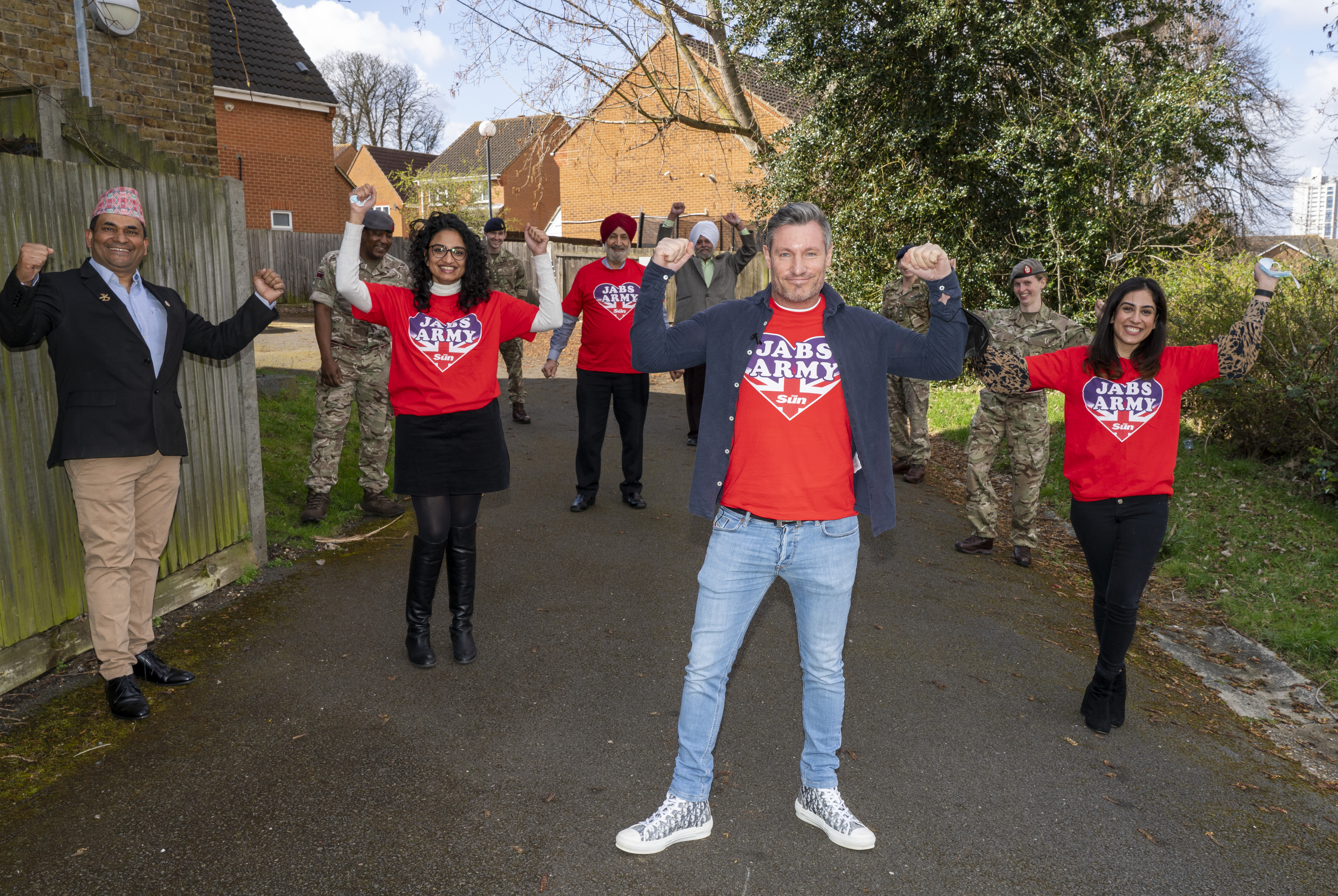 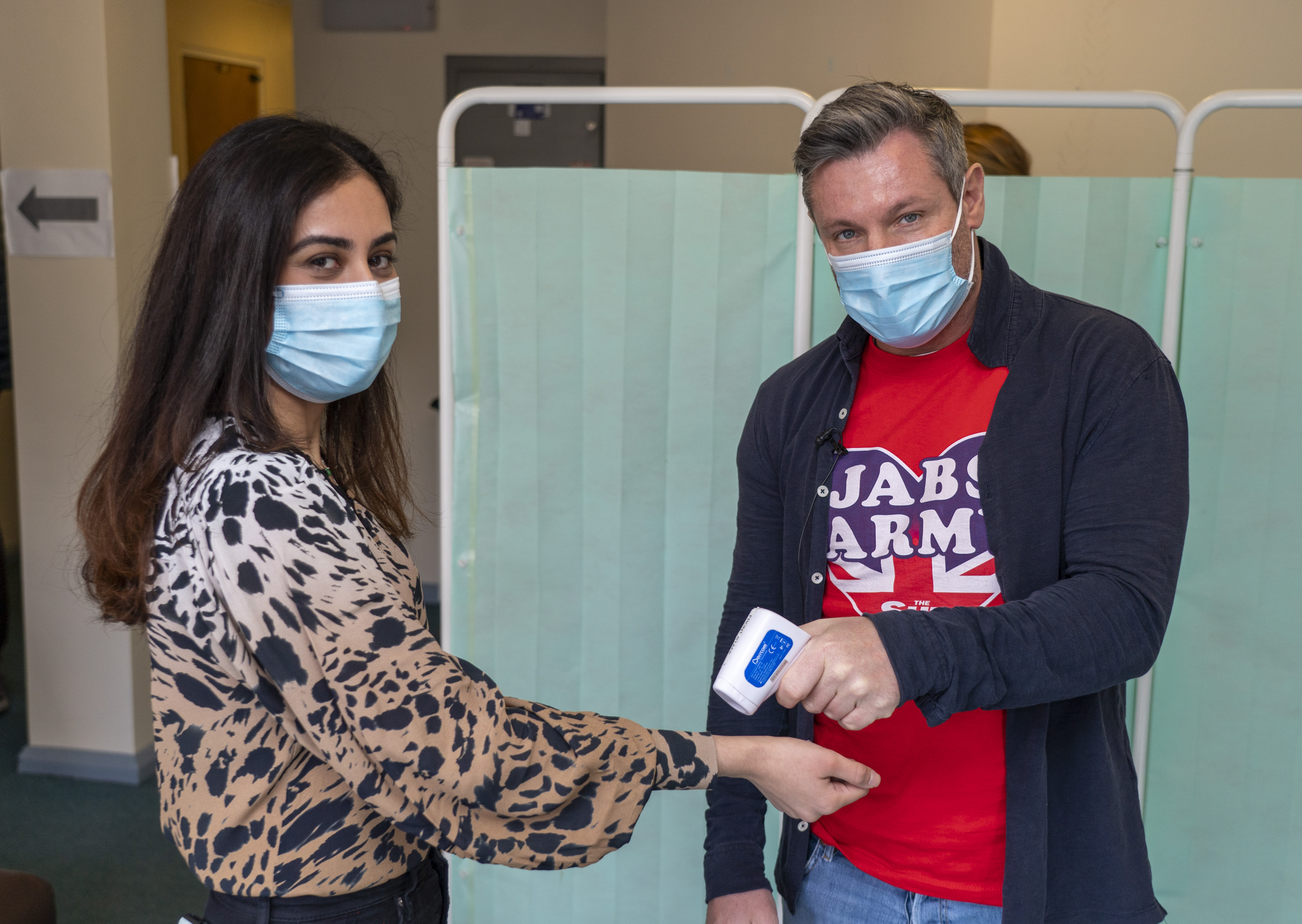 “We treat the vaccine like a newborn baby, we’re really careful with it to make sure it’s at the right temperature.

“The two we use currently both work the same and are equally as effective. Patients will barely feel the needle go in because it is so small.”

The area has a large Asian community and doctors often speak to patients in their native language to ensure nerves are calmed and people are comfortable to have their jab.

They are even treating people who haven’t registered with a GP for cultural reasons.

“We pitch in wherever we can to make the process go as smoothly as possible.

“It’s a fantastic atmosphere, it’s one of the reasons I keep coming back.

“I love coming to the clinic and being able to help people who are scared of the vaccine is wonderful.

“Sometimes I go in with the patients to be moral support while they get the jab, which is such a little thing but makes them feel much more comfortable.

“I speak several languages so I sometimes act as a translator for patients who struggle with English.

“We want to make sure they feel safe and understand what is going on.

“Everyone should help out because we can make a difference.

“It gave me an escape from being stuck at home and some social interaction.”

MUM Karen Lambert joined the Jabs Army after heartbreak during the pandemic.

She says: “Volunteering is so humbling and gives me such a warm, fuzzy feeling that you don’t get anywhere else. It’s been a shining light at a very difficult time.

“I lost my dad this year after he had a heart attack.

"I’ve also seen so many friends suffering due to losing loved ones to Covid so I wanted to help.”

Karen, 47, signed up for the Jabs Army and volunteers as a marshal at the Peepul vaccination centre in Leicester.

She says: “I’ve got five kids so I fit my volunteering shifts around them.

“Often I end up doing the school run and passing the little ones to my husband or older kids before heading straight off to my shift.

“It’s such a lovely atmosphere and people are so happy to be there getting their jabs. It’s like nothing else.

“We’ve had a few people who are scared or worried but once they’ve had a chat with us or a medic they’re normally much calmer.

“It’s been a really uplifting thing to do during such a horrid time. I really enjoy chatting to people as they wait to go in to get their injection.

“Marshalling at the vaccine centre is pure joy. I’d volunteer every day if I could.”

Jewellery maker Alka, 31, plays an essential role in ensuring the clinic can do 600 jabs a day as she prevents delays and ensures every person who comes in feels supported.

An emotional Dean told her: “It’s such an amazing thing to do.

"What you’re doing is so important and to get up on Saturday, give up your free time and do this for free is amazing. I can’t thank you enough.

“We have to take something good out of this madness and seeing your community coming together is a really lovely thing.”

During his volunteer shift, Dean heard how many patients bring in chocs, food and other gifts for the NHS medics and helpers. 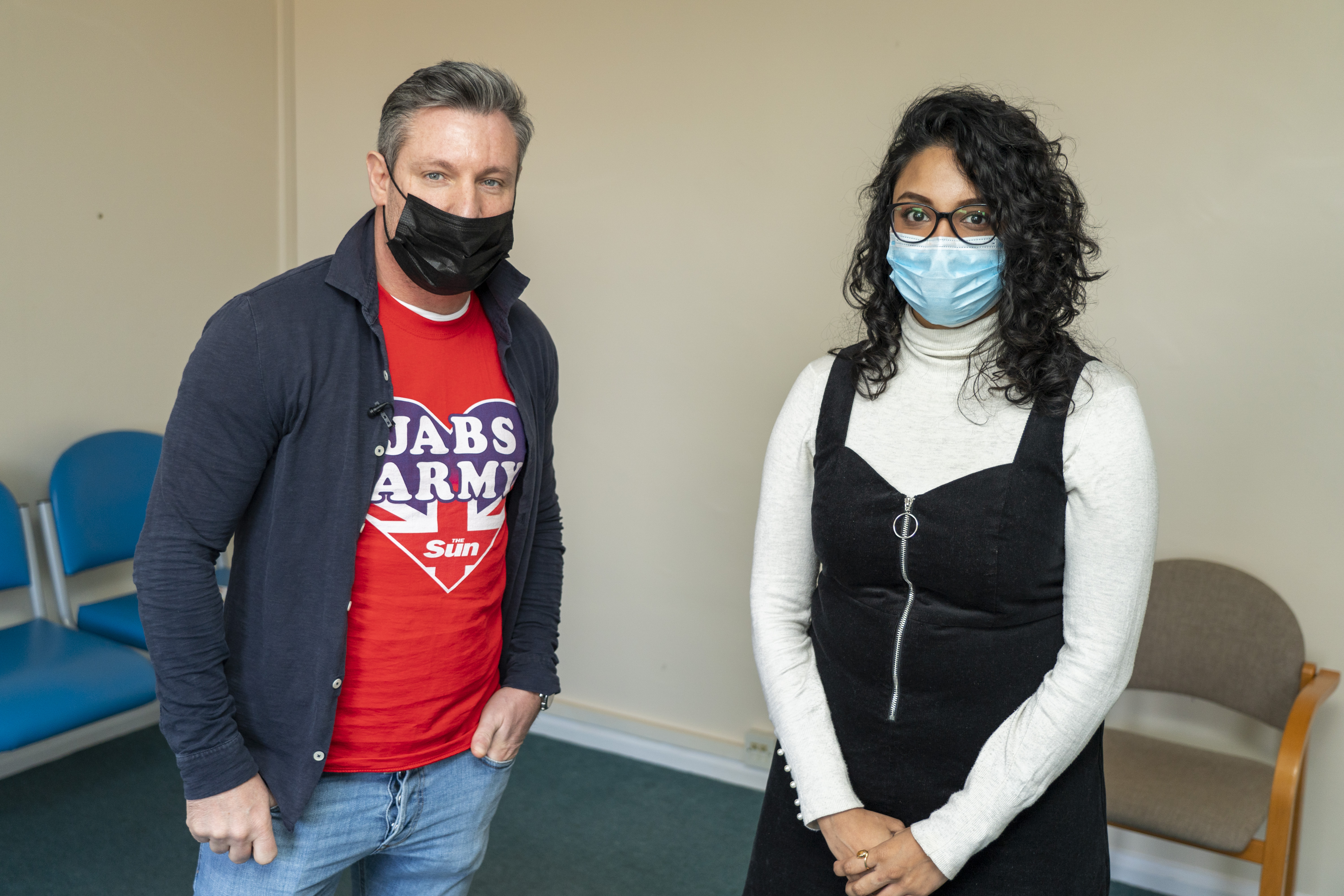 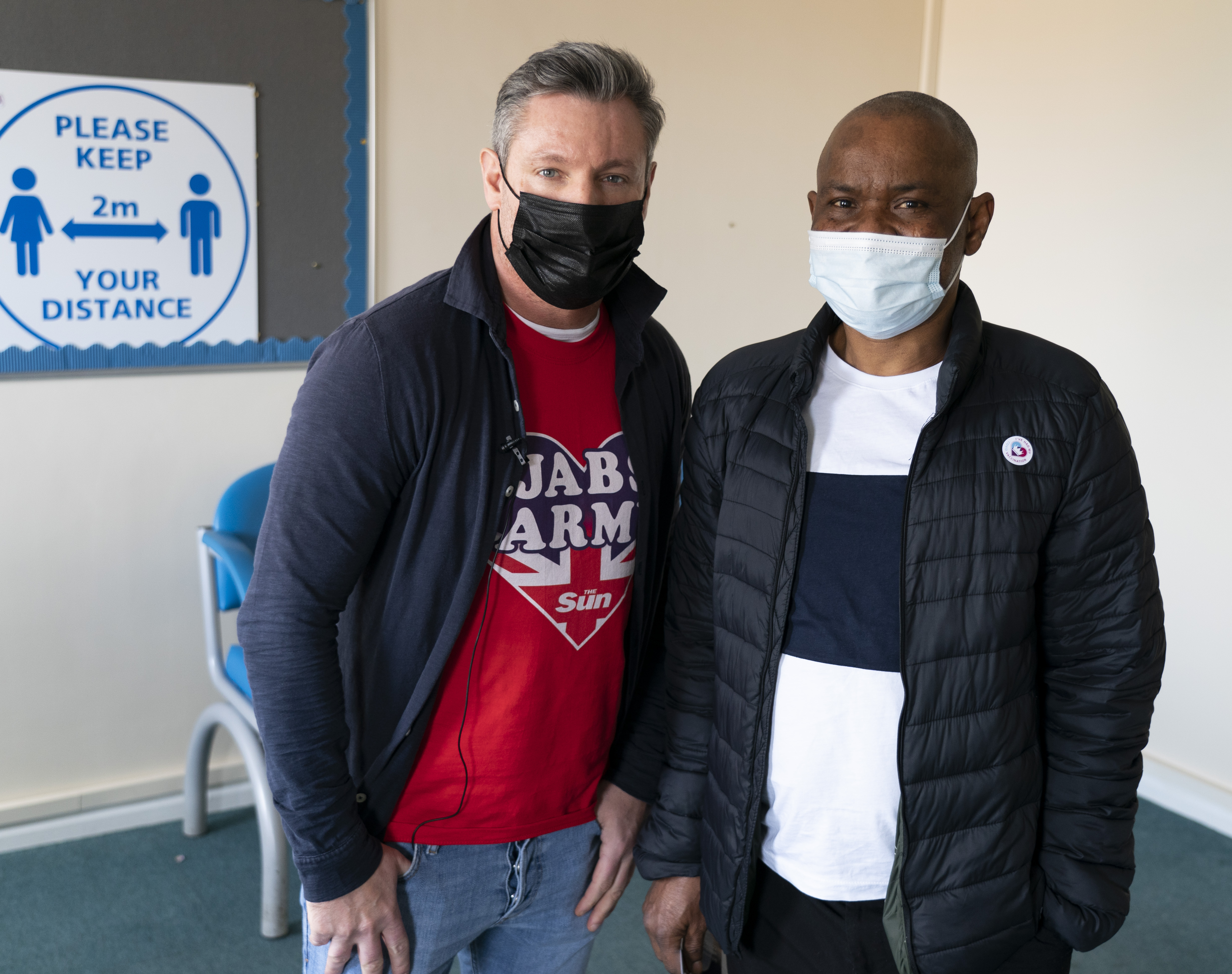 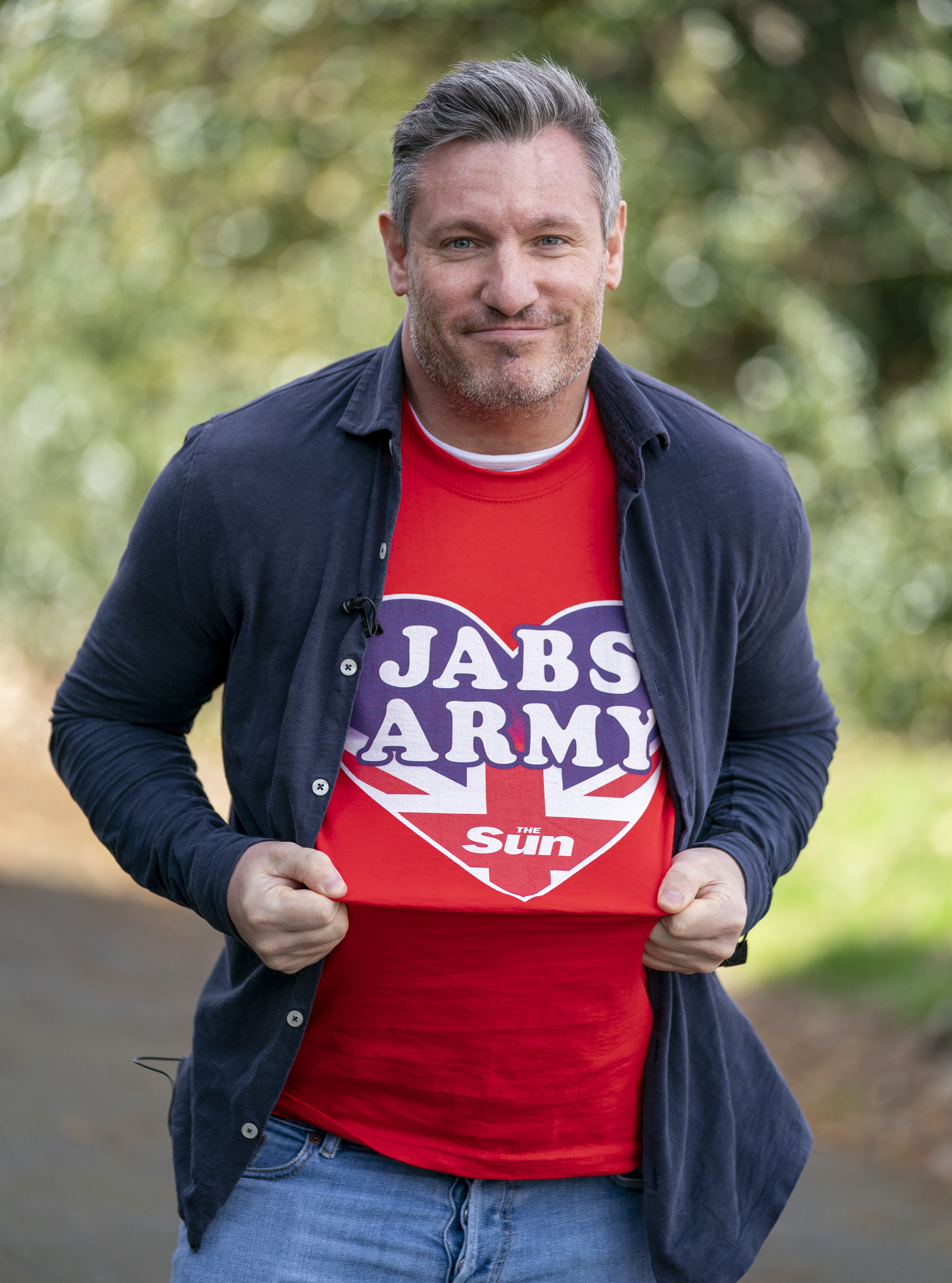 He also helped to check patients’ temperatures as they arrived at the centre to ensure they were safe to be admitted and get their jab.

The doctors at Plumstead Health Centre also run a pop-up clinic at a local Sikh gurdwara, or temple, with the most recent one seeing 110 jabs given to patients who were reluctant to come to an official clinic.

Volunteer Davinder Kundi, 72, has been giving up his time to encourage everyone to get their vaccine.

He said: “The pop-up clinic was so popular we had to turn people away because we did not have enough vaccines.

“We are so grateful to the doctors for facilitating this.

“It’s helped to banish the fear around this injection.

“Everyone here today has given up their own time. We want to help heal the pain caused by this virus.

"It’s not about religion or race, it’s about putting humanity first.”

Many ethnic communities are shunning the jab for various reasons, often fuelled by conspiracy theories online.

But Rufus Olajideikuesan, 60, had no such qualms.

Call to arms – how MPs, celebs and big businesses backed our campaign

A HOST of celebs and politicians threw their weight behind Jabs Army as they praised kind-hearted Sun readers who signed up.

Their calls were led by Boris Johnson, who begged for volunteers to help 'return the country to normal life'.

The PM wrote personally to our readers, saying: "The Sun’s Jabs Army campaign is a brilliant example of the power of collective action.

"It has already inspired companies and workplaces up and down the country to join the call to arms.

"So today, I call on everyone who has the time to join the legions of volunteers already signed up and to boost volunteer numbers further still."

Jeremy Clarkson urged Brits to get off the sofa and sign up to beat the lockdown blues.

He said: “Everyone is saying how bored they are. They’ve watched Netflix, gone through everything on the internet, read Google.

“Well let’s not be bored — let’s get off our bottoms and volunteer.”

His call was backed by a string of other celebs – including the Duchess of York Sarah Ferguson, who hailed our campaign as “fantastic”.

Health Secretary Matt Hancock saluted Jabs Army as he addressed the nation in a No10 press briefing.

He said: "Come and be a part of it. The Sun’s Jabs Army is marching and helping the nation.”

While celebrities like Bear Grylls, Gordon Ramsay and Bake Off's Matt Lucas have also thrown their support behind the campaign.

He told Dean: “It’s really important to get this vaccine, the internet is wrong.

"The volunteers have been lovely and I even got my injection earlier than my appointment because everything was so smooth.”

Dean was bowled over by what he saw at the centre and said: “It’s absolutely amazing what the doctors and volunteers here have done.

“I know there are a lot of people who would want to help but they wouldn’t actually go out and do it as these guys have. 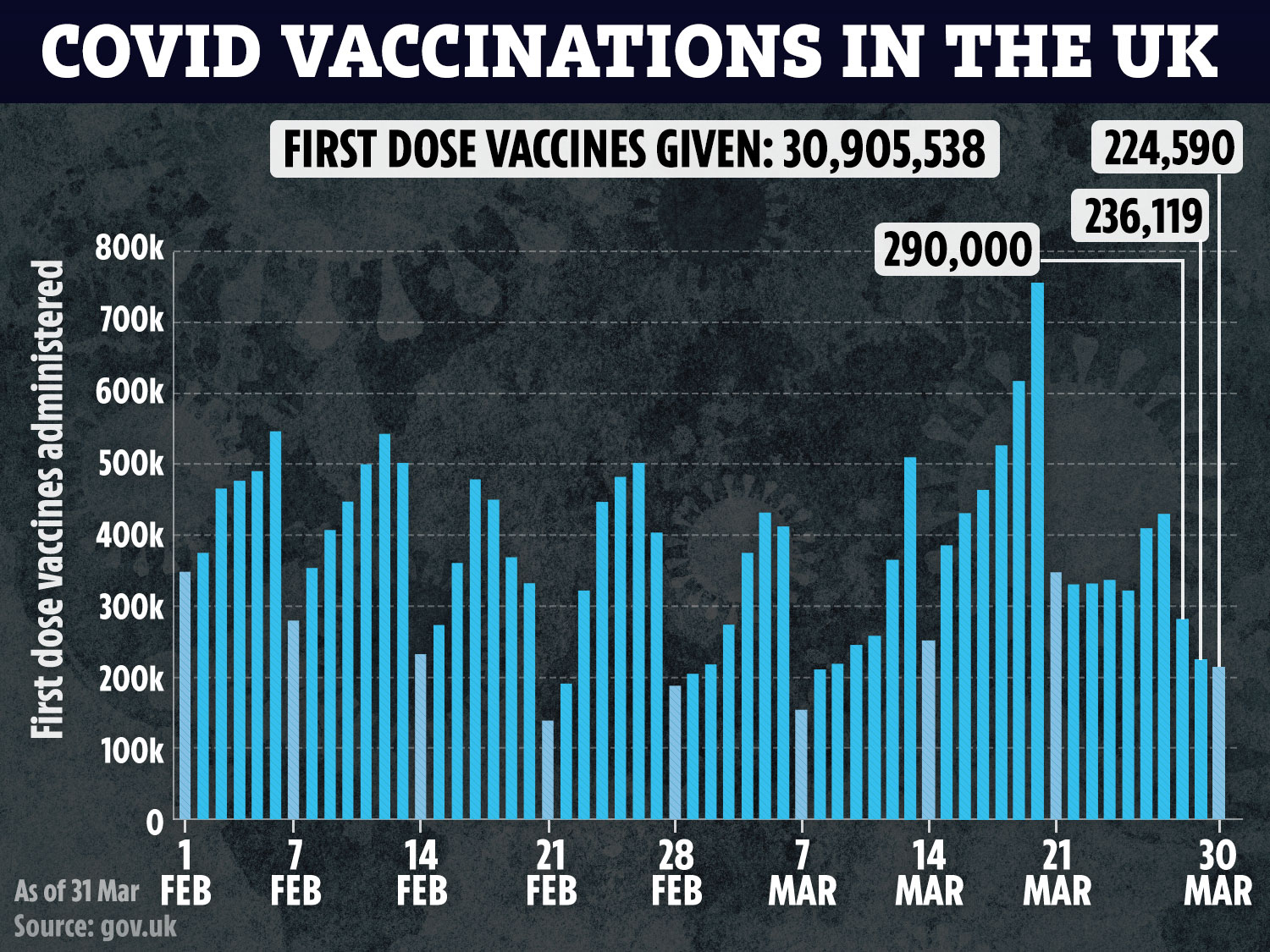 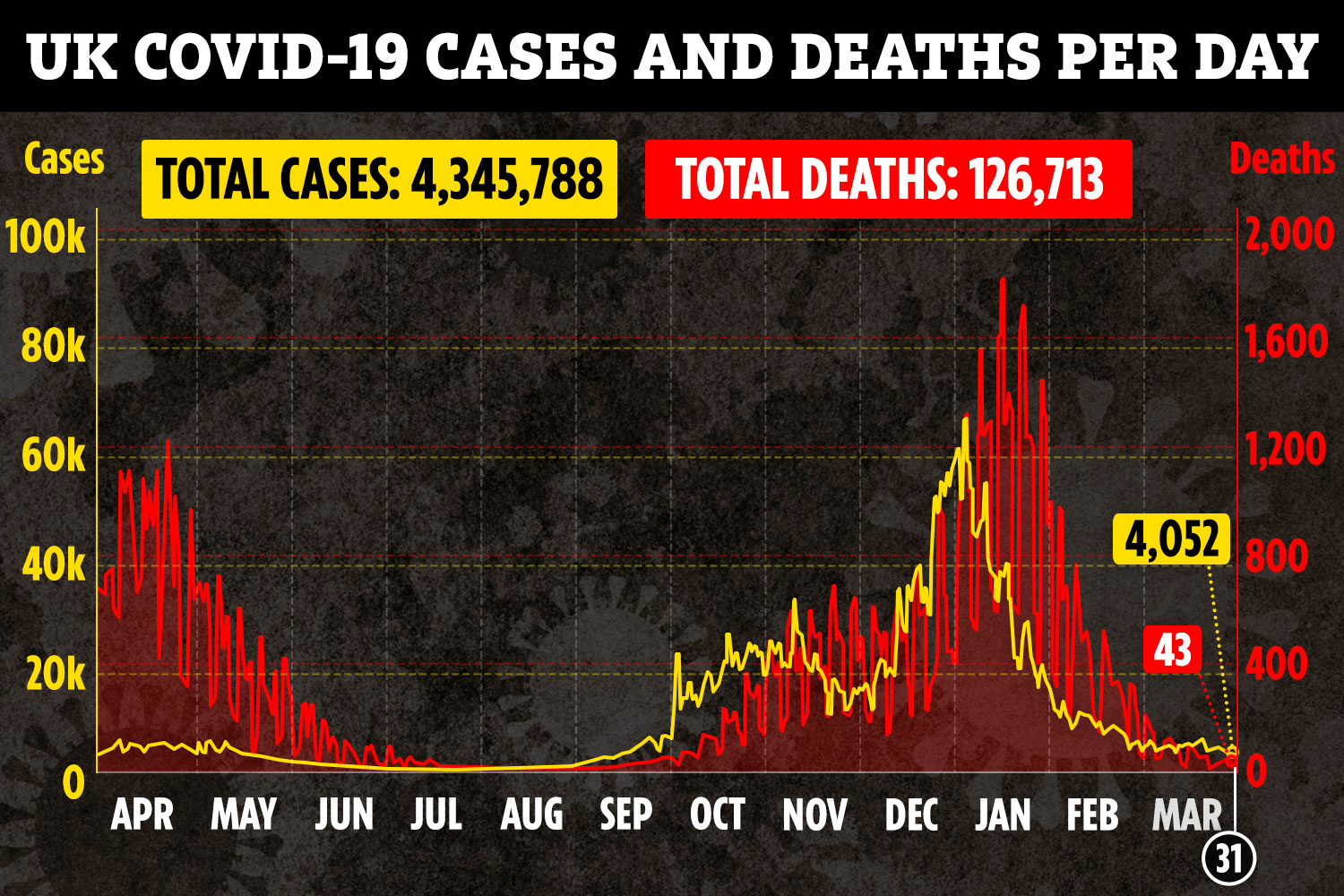 “Every single person is met with a smile and made to feel important, rather than part of a production line.

“It’s really refreshing to see something positive coming out of this horrendous pandemic, and the volunteers are the shining light.

“Hearing everything they’re doing is incredible and we all owe them our thanks for stepping up.”

OUR brilliant Jabs Army is to appear in a moving TV advert on prime-time Saturday night telly.

The ad will be shown during Ant & Dec’s Saturday Night Takeaway this weekend, and will feature selfies of our volunteers helping out at more than 200 vaccination centres, from Cumbria to Cornwall.

We asked our Jabs Army to send us selfies of them in action and we received so many that not all of them could be used in the telly ad – so in Saturday’s Sun we will be printing an historic poster featuring the faces of many of the volunteers who have made the Jabs Army such a massive success.

When we asked for volunteer stewards to help make Britain’s vaccine rollout the envy of the world, an amazing 50,000 of YOU, our amazing Sun readers, stepped forward to help.

And that is why this weekend The Sun – along with the Royal Voluntary Service and the NHS – is saying a huge thank you to every single one of you via the advert.

And the rest of us can show our support for the thousands who have given up their time to help Britain in her hour of need by putting our poster up in windows to say a heart-felt thanks to the Jabs Army too.

And don’t miss The Sun’s Jabs Army TV tribute during Ant and Dec’s TV show, from 7pm on Saturday.