A former bigwig with Victoria's Education Department claims the amount of money he personally gleaned from rorting his employer was much less than the sum agreed upon as part of a plea deal.

Nino Napoli oversaw a $5 billion budget as general manager of the department's finance unit and from 2007 to 2014 was involved in dozens of suspicious contracts that paid $500,000 to companies run by his relatives.

The funds were misappropriated through Napoli’s knowledge of the “banker school” scheme, where designated schools received money to share with nearby schools. 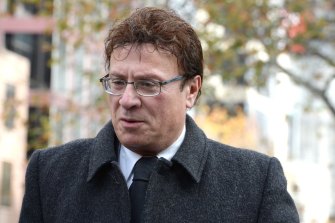 Napoli and cousin Carlo Squillacioti, the director of companies illegally paid during the rort, have each pleaded guilty to conspiracy to defraud and attempting to pervert the course of justice.

Two of Squillacioti's companies were awarded contracts for printing work when they did not have any equipment.

Now, after a plea hearing that spanned four days in the County Court in August, the two men say the money they personally gained was much lower than the figures their lawyers and prosecutors agreed to before the pair pleaded guilty. 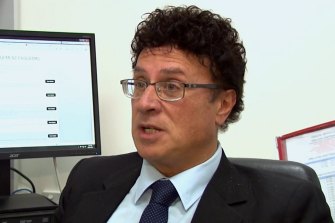 Prosecutors say Napoli personally benefited by $95,000, part of which he spent on wine, a television, an iPad and his signature toupee. But on Tuesday, the court heard Napoli's solicitor recently filed a written submission that put the figure at $36,000.

Prosecutors put Squillacioti's personal benefit at $58,000, but the court heard his solicitor submitted it was "considerably less than that".

The submissions prompted concern from prosecutors, who fear the men are trying to traverse what was agreed during plea negotiations. The submissions also said the invoiced work was carried out in all but two of the contracts, the court heard, and that Napoli raised conflict-of-interest issues with his department.

The dispute also means sentencing for Napoli, 64, and Squillacioti, 62, will be further delayed, as more pre-sentence hearings will be needed, possibly in a plea hearing where some facts are contested.

Judge George Georgiou said on Tuesday the latest monetary figures appeared to "cut across" the case put to the court in August as an agreed set of facts.

"It does seem to read that your clients are claiming that their benefit was much less than what was previously agreed," Judge Georgiou told the cousins' new barrister, Gideon Boas.

Dr Boas said the submissions were not intended to traverse the deal entered with prosecutors, but determining how much the men gained in the rort was difficult.

"We can't pin a dollar value on the amount of work that was invoiced and was not done," he said.

Judge Georgiou set the case down for further plea and told both sides the points they made had to be either agreed upon or backed up by evidence. Prosecutors could yet call on a forensic accountant to give evidence.

The judge also rejected as "nonsense" a suggestion by the solicitor for Napoli and Squillacioti that it was difficult to get instructions from the men on contentious points.

"I am not going to allow this matter to continue dragging on," the judge said.

It also emerged on Tuesday that Napoli and Squillacioti instructed their solicitor, Sazz Nasimi, to file the written submissions without the knowledge of the barrister who represented the pair in August, Jim Shaw.

Mr Shaw said on Tuesday he reached the "inescapable assumption" he was no longer wanted to act for the two men, and stood down from the case.

He previously called for both men to be spared prison terms. Napoli and Squillacioti, currently on bail, were charged after a probe by the Independent Broad-based Anti-corruption Commission.

The next substantial hearing is likely to be held next month.