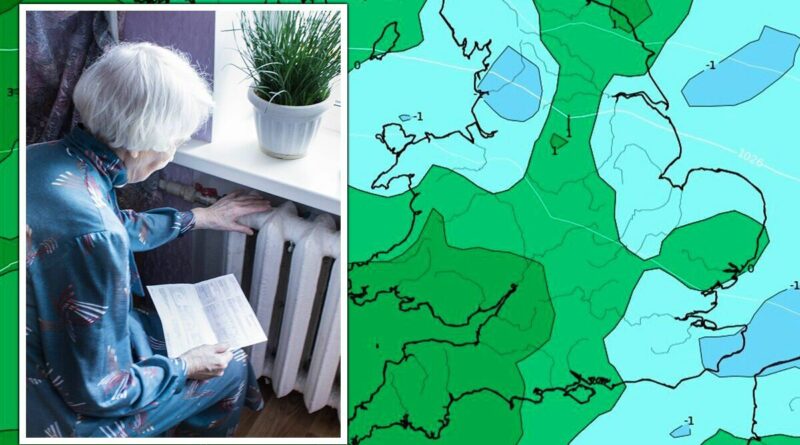 Energy: Radio caller says he’s ‘waiting to be cut off’

A meteorologist has revealed the exact date temperatures will begin plunging across the UK, forcing an energy-cautious nation to lean on their heating systems for the first time this season. Much of Britain, apart from the Scottish Highlands, has sustained a relatively mild mercury after the hottest summer on record. Even Halloween weekend, in just a few days, will see highs of 18C in London and the south east. But the spring-like atmosphere, which has helped people resist their thermostats so far, may be about to change.

Weather maps show the south-east recording lows of 4C during the day, with thermometers hovering at around 2C in the south west and across central Wales. But, unusually, the north will actually peak at two degrees higher, but a brisk wind will render much of England far colder than it has been.

Mr Dale said: “I think it’s going to be a gradual thing through that first week – Scotland first but nothing yet over the top. It is an almost an inevitable decline given where we are right now, it’ll be a long walk to normality. I suspect we we see frosts in Scotland but it’s too far away for proper detail yet.”

The Met Office’s long range forecast from November 7 to 21 adds: “Unsettled conditions are expected to continue at first, with further heavy rain possible, particularly in the south.

An increasing chance of settled weather remains during the second week of November, bringing a potential for colder, drier weather especially for the north and west.”

Despite the cold weather, many people will be trying their best not to switch the central heating on as energy bills continue soaring to more than double for many.

Last month, the Government committed to a two-year £2,500 energy price guarantee for households with average gas and electricity usage, but with Jeremy Hunt taking over from the former Chancellor Kwasi Kwarteng, this energy bill support is now set to last until next April.

This guarantee, which the nation was crying out for, has now left people wondering what assurances will be put in place next spring, with Mr Hunt confirming help will be tailored to the most vulnerable after this deadline.

The outlook for the rest of November will be far different to October, more so because of the fact the weather will be more settled – as opposed to vast showers and gusty winds which have dominated the country this weekend.

With a settled atmosphere, though, comes the risk of more frost and snow – another factor which will make homes colder and may put vulnerable people, particularly those living in poverty, at risk.

The Met Office’s long range forecast continues: “This will likely bring a risk of chilly nights with mist, frost and fog in places, with some snow expected to fall in any showers in northern and western areas.”

WX Charts, a weather model, shows the cold weather front lasting into Tuesday, November 8 – but due to this date being in more than a fortnight’s time – there is no indication of whether or not the cold spell will last all of that week.

Off the back of the new Chancellor’s amendments to the energy price cap, consumer expert Will Hodson spoke exclusively to Express.co.uk, about the more “prudent” path that has now been set for the nation.

But he also pointed out the problem with the change, and called for Mr Hunt’s forward planning to help the most vulnerable population – the specfics of which are not yet detailed.

He said: “For me, it wasn’t a huge surprise because with Jeremy Hunt becoming Chancellor, we’re setting out on a very different economic path. It’s a path which is aiming to be more restrained and more prudent. Now, when the energy price guarantee was announced the initial reaction from lots of people was pretty positive but the problems were always plain to see.

“The problem is it is universal, not well targeted and exposes the British taxpayer to potentially unlimited amounts of money, depending on how high gas prices go to cover bills across the UK for two years.”