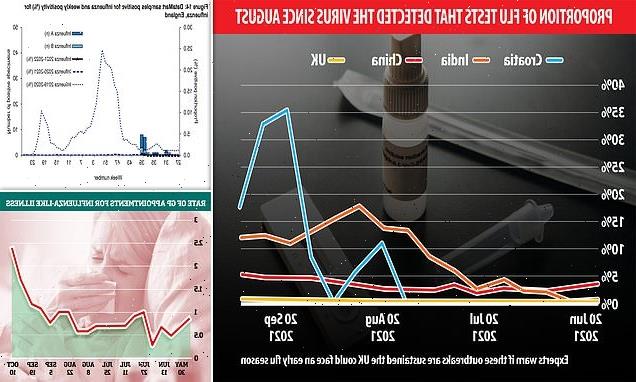 Britain told to brace for an early flu season by top expert as fears grow 60,000 could die from influenza this winter

Britain should brace for an early flu outbreak this winter because cases are already rising in other countries, a top expert has warned.

The UK’s flu season tends to last from September to March but the virus does not usually heap pressure on the NHS until January.

Latest surveillance suggests cases have more than doubled in a fortnight but remain below levels seen from the same point of the 2019/2020 flu season. Health officials insist the virus is only circulating at ‘very low’ levels.

Dr John McCauley, one of the world’s most eminent flu scientists who is based at the Francis Crick Institute in London, warned surges in Croatia, India and China suggest there could be an earlier outbreak in the UK and other countries.

The outbreak in Croatia may act as a ‘canary in a coalmine’ because it is proof it is already present and ticking upwards in Europe.

Outbreaks in India and China demonstrate that flu remains in circulation in large populations, and could quickly be exported to other countries by travellers.

He told MailOnline: ‘It’s over the next few weeks that we will be able to tell if what we are seeing now is sustained. If it is, we might expect an early flu season.’

Health chiefs are offering flu vaccines to 35million over-50s, healthcare workers and those in at risk groups. It is the biggest flu inoculation drive in the history of the NHS, and is happening alongside the Covid booster roll out.

Experts fear flu could kill up to 60,000 Britons this year because of waning immunity from the virus, as many have not been exposed to it for at least 12 months.

There are also mounting fears that the NHS will be struck down at the same time by Covid, with colder weather and darker evenings leading to increased social contact indoors — where viruses find it easier to spread.

Health Secretary Sajid Javid was yesterday pictured getting his flu jab, as he called on Britons to get their flu and Covid vaccines.

Flu is a seasonal menace on the NHS, with outbreaks more likely at this time of year because colder weather forces more people indoors where the virus — like Covid — finds it easier to spread.

But it virtually disappeared last winter amid lockdowns aiming to control the spread of Covid.

The above graph shows how the rate of GP appointments for influenza-like illness, such as blocked noses and coughs, has risen recently. These are not confirmed cases of flu, but give an indication of the spread of the virus in the population 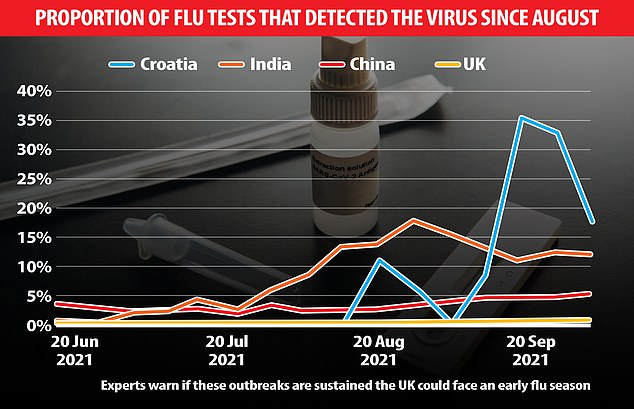 The above graph shows the proportion of swabs for flu that have picked up the virus in Croatia, India, China and the UK. Scientists warn that if outbreaks are sustained then the UK could be heading for an early flu season 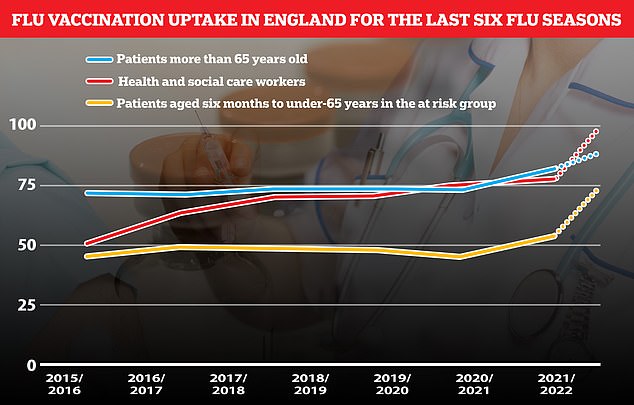 The above graph shows flu vaccine uptake in each group since 2015. The dotted lines represent the aim for jab uptake during this year’s flu season

Asked about Britain’s flu situation Dr McCauley, who heads up the WorldWide Influenza Centre, warned the UK may need to brace for an early surge in cases.

He said: ‘There is flu being picked up in some places, but whether it is spreading in some of these (e.g. Norway and the Netherlands) is not known for certain.

‘On the other hand, Croatia has had flu activity over the last four weeks. I don’t know if it will be sustained over the coming weeks.

‘There has been flu in China from January — but at somewhat lower levels than two years ago.

Britain has launched its biggest ever flu vaccination drive this year, aiming to get the jab to more than 35million people.

The shot aims to spark protection against four strains of flu, following a recommendation from the World Health Organization.

There are concerns that the country may face a bad flu season, however.

Experts fear that flu’s absence for more than a year has meant many people’s immunity against the virus has waned.

The following groups are being offered the flu jab:

‘India has had flu as well — but it is difficult to know how widespread it is in such a large country.’

WHO data from its FluMart system — which monitors outbreaks globally — highlights a recent outbreak in Croatia, where 35 per cent of swabs tested positive in the third week of September (50 of 140 swabs picked up the virus).

This has now dropped to 17 per cent in the latest week (14 of 79), up to October 3, but it is unclear whether the downturn will be sustained.

India has seen around 10 per cent of its almost 3,000 flu tests pick up the virus every week since mid-August.

And data submitted by China suggests cases of flu there have been rising steadily since the end of August.

In Britain flu remains at very low levels with just 0.2 per cent of swabs for flu (14 of 9,052) detecting the virus in the week to October 3, the latest available.

The latest report from the UK Health Security Agency — which replaced Public Health England — shows flu cases are ticking up but remain at very low levels.

There were 10 flu infections detected in the last week of September, it said, compared to just three two weeks ago.

But a different number of tests for the virus are carried out every week, skewing the statistics.

Croatia has relatively few entry restrictions for UK travellers, only requiring them to be double-vaccinated and have tested negative 48 hours before arrival.

India is currently only allowing a limited number of flights from the UK for nationals, and requires all British arrivals to quarantine for 10 days upon arrival. They must also test negative for Covid up to 72 hours before travelling, and on day eight of their visit.

The Indian Government plans to lift restrictions on tourists arriving from October 15, allowing visitors into the country for the first time in 19 months.

China has suspended all flights from the UK, and is yet to recognise NHS Covid passes as proof of vaccination against the virus. It requires all arrivals from Britain to quarantine for 14 days in a facility, and to test negative for a type of Covid antibody that is made in the early stages of an infection.

Britain requires arrivals from these three countries to complete a passenger locator form and test themselves for Covid on day-2 of their arrival. There are plans for the test to be dropped by the end of October. 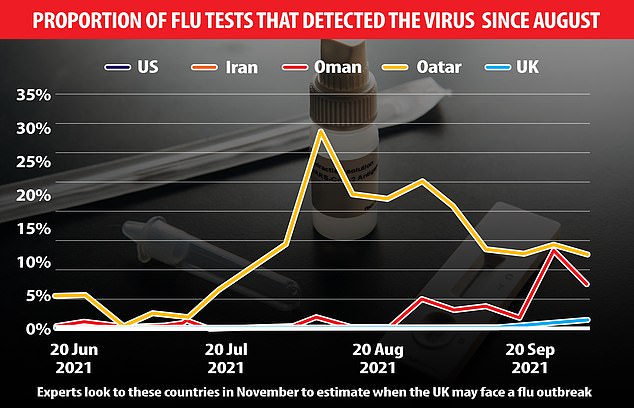 Experts normally monitor flu outbreaks in the US, Iran, Oman and Qatar from next month to guage what may happen in the UK. Data shows the proportion of swabs that have detected the virus in these countries have only ticked up in Oman and Qatar so far 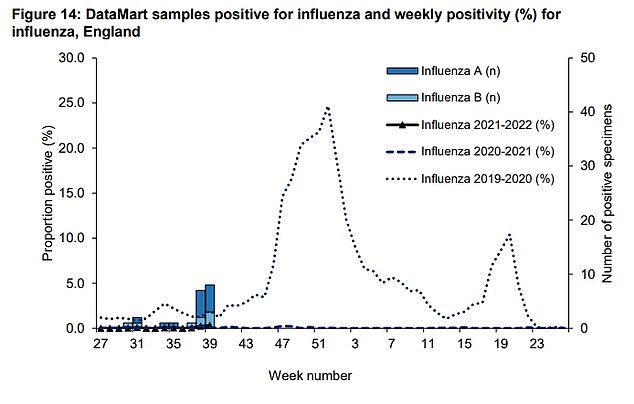 The above graph shows the number of flu cases detected by week this year (blue bars) and the proportion of swabs that have tested positive for the virus in previous years (dotted lines). Data shows flu cases in the UK are rising, but remain below the levels from 2019/2020 flu season 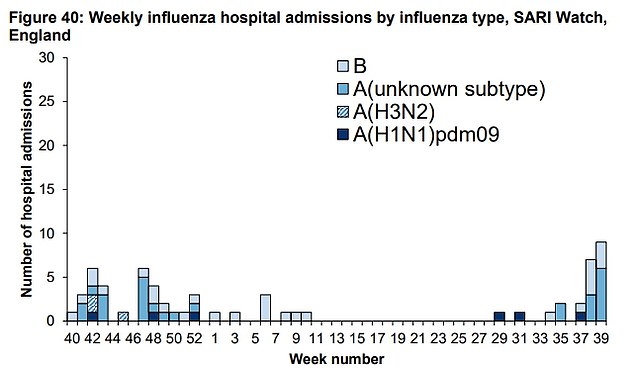 The above graph shows the number of hospitalisations with different strains of flu by week up to the last week in September (week 39) for England. It shows a rise in hospitalisations, although these also remain at ‘very low’ levels 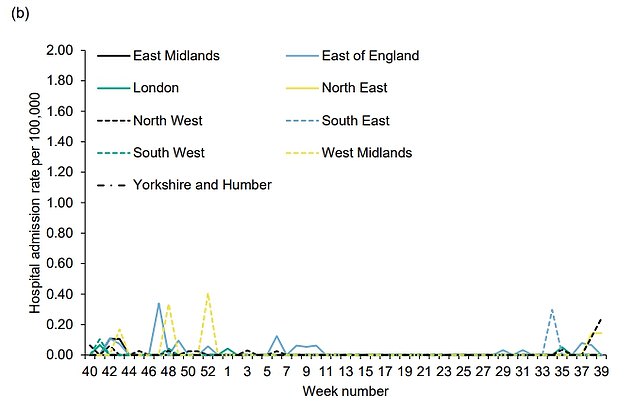 The above graph shows the hospitalisation rate per 100,000 people for flu cases. It reveals that towards the end of September (week 39) there has been an uptick in parts of the country

The flu jab could be less effective than normal this winter because of the coronavirus pandemic, vaccine makers warned in August.

Every year a new influenza vaccine is developed to protect against several strains of the virus that have been circulating around the world.

But over the past year, surveillance of flu strains dropped to a fraction of normal levels as medical resources were turned over to monitoring Covid.

There has also been a lack of flu infections because of lockdowns worldwide, which has also reduced surveillance.

The effectiveness of flu vaccines varies from one season to the next but it is estimated at between 30 and 60 per cent.

It comes amid fears of a bad bout of influenza this year due to a lack of natural immunity caused by lockdowns.

Last September — five months before experts decide which strain to protect against — global genetic sequencing of flu had dropped by 94 per cent, according to jab makers.

And global shipments of influenza surveillance samples have dropped by 62 per cent compared to before the pandemic.

Dr Beverly Taylor, head of influenza and scientific affairs at Seqirus, which provides Britain with seasonal flu jabs, said: ‘We could have reduced the opportunity to identify viruses as they emerge.

Experts insist it is still too early to tell whether the UK will face a major flu season, despite widespread concern.

But if there are outbreaks in the US, Qatar, Oman or Iran in early November this would be a tell-tale sign that the country can expect a major wave to kick in before the new year.

This is because outbreaks in these countries can be seeded into the UK.

Experts watch Qatar particularly closely because its cases are heavily influenced by international travel due to its position as a transport hub. This means it gives an indication of how much flu is being moved around by travel.

Some 80 per cent of over-60s and 76.8 per cent of NHS workers were inoculated against flu last year, according to now the defunct Public Health England.

Officials are aiming to jab every healthcare worker and 85 per cent of over-80s this year.

Data from pharmacies — helping to fuel the roll out — show at least 1.8million Britons have been inoculated against the virus since August.

Around 80,000 Britons are being inoculated against flu in pharmacies every day this month, figures suggest.

The flu vaccine is offered every year to help protect people against the disease and reduce pressure on the NHS.

It is based on which flu strains are circulating in the southern hemisphere, which give an indication of which types are likely to be prominent in the UK.

But there was virtually no flu last year, making it difficult for vaccine makers to assess which strain is most likely to be prevalent in the coming months.

Vaccine makers warned in August that their jabs may be too weak to protect people against the disease this winter.

This year marks the first time that flu is likely to circulate alongside Covid, which could place an extra burden on the health service.

Dr Jenny Harries, the chief executive of the new UK Health Security Agency, said: ‘We are facing a challenging winter but we can all help ourselves and those around us by taking up the Covid booster and flu vaccine, if eligible.

‘Getting vaccinated against both viruses will not only help to protect us and our loved ones, but will also help protect the NHS from potential strain this winter.’

She warned this weekend that people who catch flu and Covid at the same time are twice as likely to die as those who only have Covid.

She told Sky’s Trevor Philips on Sunday: ‘I think the important thing about this winter is, we are likely to see flu, for the first time in any real numbers, co-circulating with Covid. So the risks of catching both together still remain.

‘And if you do that, then early evidence suggests that you are twice as likely to die from having the two together than just having Covid alone.’

She added: ‘So I think it’s an uncertain winter ahead — that’s not a prediction, it’s an uncertain feature — but we do know that flu cases have been lower in the previous years so immunity and the strain types are a little more uncertain.’