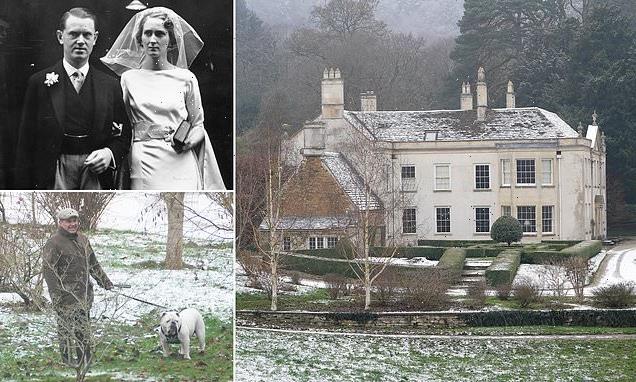 EXCLUSIVE: ‘Hyacinth Bouquet’ tenant says she WON’T move out of Evelyn Waugh’s Cotswolds mansion after it sold for £3m at auction and she was slapped with eviction order

An admirer of literary giant Evelyn Waugh who is being evicted from his family home has told how she had planned to restore the property to its former glory.

Helen Lawton, 62, claims she has the backing of the writer’s family who support her as the custodian of the Grade II listed Georgian manor.

Ms Lawton pays just £250-a-year rent to live at the eight-bedroom property which has been sold to a mystery bidder for £3.16million.

She and her partner, Lebanese businessman Bechara Madi, 60, say they are victims of ‘legalised theft’ and vow to carry on living at the manor in 23 acres of prime Cotswold countryside. 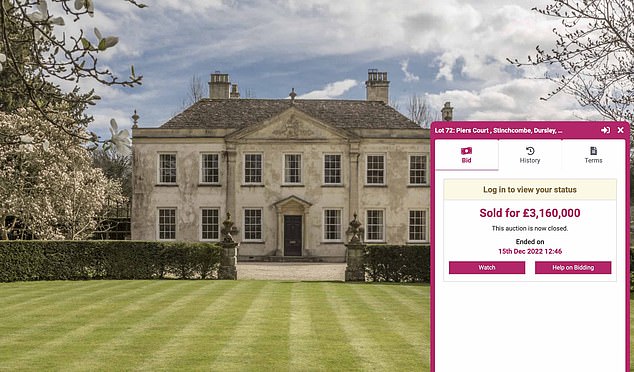 Helen Lawton, 62, claims she has the backing of the writer’s family who support her as the custodian of the Grade II listed Georgian manor, which has been sold to a mystery bidder for £3.16million 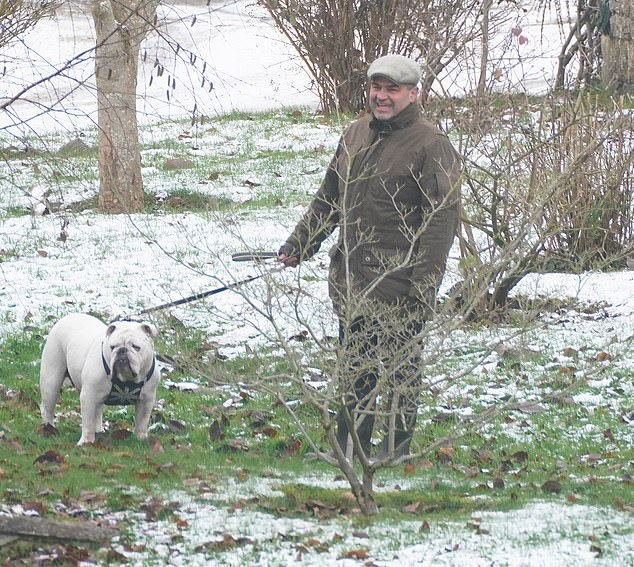 Ms Lawton and her partner, Lebanese businessman Bechara Madi (pictured on Wednesday walking his dog, Boo, on the grounds of the mansion), 60, say they are victims in the dispute and vow to carry on living at the manor in 23 acres of prime Cotswold countryside 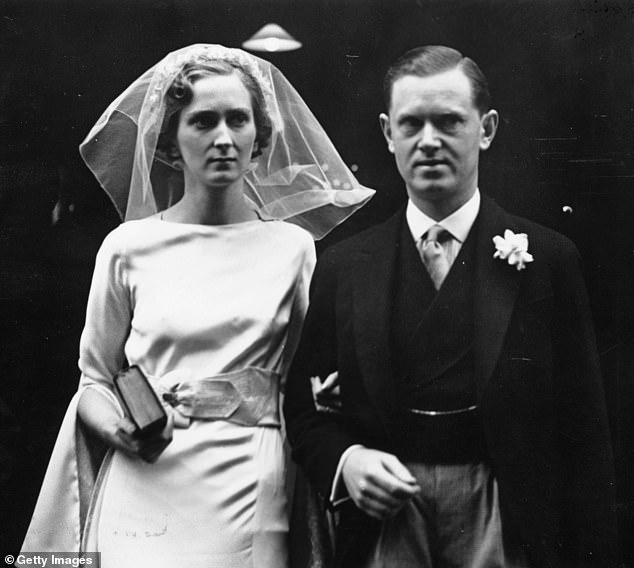 Evelyn Waugh and his wife Laura Herbert at their wedding in 1937. Waugh used the money from his wife’s father to purchase Piers Court

The pair say they paid a £300,000 deposit on Piers Court when they set up a property company to purchase it four years ago and have continued to invest money in it.

Ms Lawton said: ‘For them to auction the house 10 days before Christmas is totally outrageous, morally and on every level.

‘It was my wish to restore the house and give it its dignity back. That was going to be my legacy in life.

‘It was going to be a long project, I’ve done all the research on the architecture, the interiors, the grounds. It hasn’t been touched since the eighties, it needs an enormous amount of work, especially on the outside.’

Interior designer Ms Lawton has been consulting with architects and English Heritage to return Piers Court, in the village of Stinchcombe, back to its original state.

She said: ‘I am passionate about the house. It was love at first sight when I saw the house and apparently it was the same for Evelyn Waugh – he said he was beguiled by the place.’

Waugh, author of Brideshead Revisited and Decline And Fall, paid £3,600 for Piers Court in 1937.

Ms Lawton, known as a Hyacinth Bucket character, said: ‘You are only ever a custodian of somewhere like this.

‘Bachara and I don’t have children so we have considered leaving the house to the Evelyn Waugh Society.’ 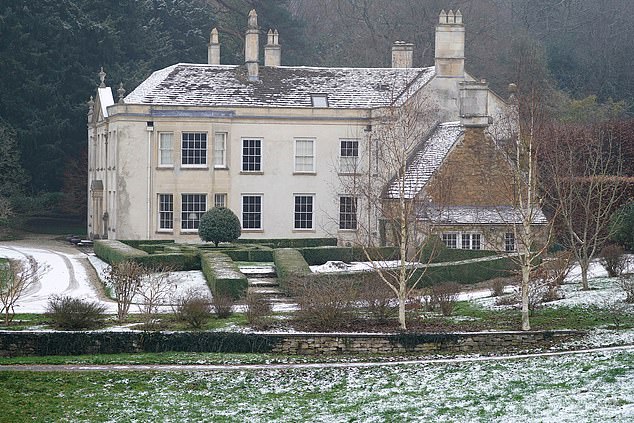 The eight-bedroom property is in the village of Stinchcombe, Gloucestershire. Novelist Evelyn Waugh bought it for £3,600 in 1937 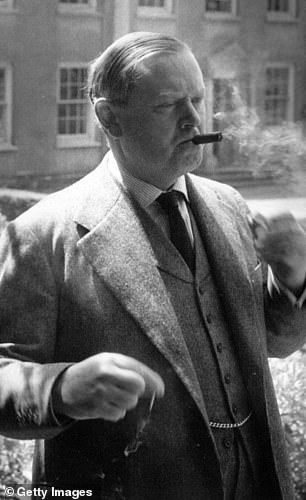 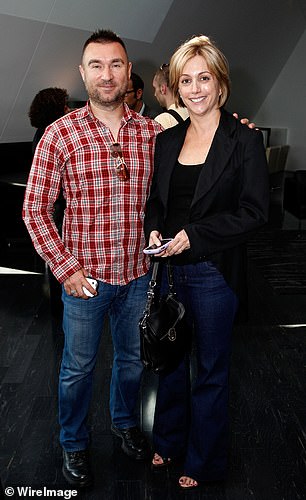 Evelyn Waugh (pictured left in 1955) lived at Piers Court for 19 years and wrote novels including Brideshead Revisited, Officers And Gentlemen and Men At Arms in the library there. The mansion was bought in 2019 by Jason Blain (pictured right in 2009 with producer Deborah Schindler), a former BBC executive

Ms Lawton, who describes herself as ‘eccentric’, even bought herself a Georgian horse-drawn carriage to go with the house of her dreams.

The couple say they had a £10,000 survey carried out on the property when they first moved in and had started restoration work when the Covid pandemic struck.

Ms Lawton said Waugh’s son Septimus, the writer’s seventh child, who lived in the house when he was young and died of cancer last year, was backing their plans.

She said: ‘I had lovely conversations with Septimus about his time at Piers Court. He could remember the staircases and the chandeliers.

‘I had hoped that whatever time I had left I would be doing my utmost to restore the house and the grounds.’

But in August Ms Lawton and her partner were served with an eviction notice when the bank they borrowed £2.1million from called in the loan.

A firm of receivers was brought in after their business partner Jason Blain was sued over an alleged unpaid hotel bill of £740,000. 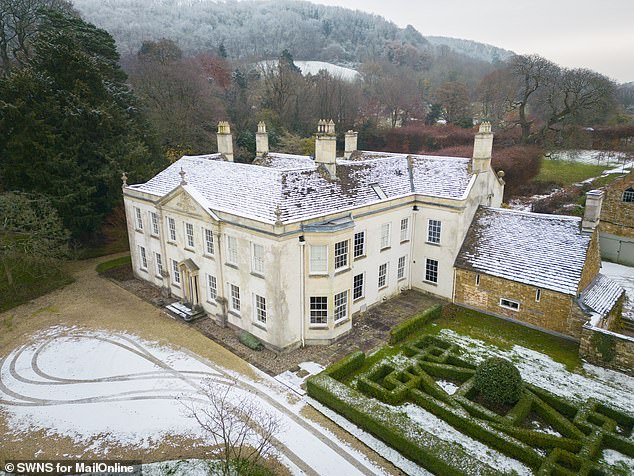 The former home of writer Evelyn Waugh, in Stinchcombe, Gloucestershire, was sold for £3.16million at auction yesterday 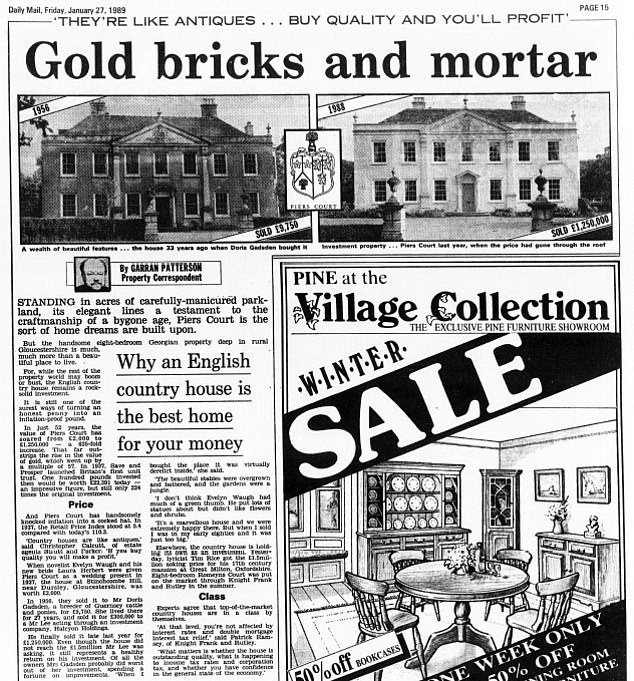 The home was featured in the Daily Mail in January 1989, after it sold for £1.25million

The shareholders said they had proof of funds to redeem the mortgage but they were ignored and the property was put on the market even though Ms Lawton and her partner refused viewings to prospective buyers.

Just 24 hours before an online auction Mr Bechara told MailOnline ‘We’re going nowhere,’ and said the couple would be putting their Christmas tree and decorations up as usual.

London auctioneers Allsop declined to name the new owner who had been warned: ‘The property is occupied under a Common Law Tenancy at a rate of £250 per annum.’

The buyer paid £660,000 over the guide price but, according to Ms Lawton and Mr Bechara, they still have a bargain. They believe the mansion is worth in excess of £4million.

The couple, who own a multi-million pound flat in London, have accused the bank and receivers of acting ‘aggressively and in an underhand way’.

Financier Mr Madi, 60, said: ‘Until contracts are exchanged there is no formal sale – we need to speak to Jason (Blain) about this to assess our position.

‘We will have internal talks to see what our next move will be.’