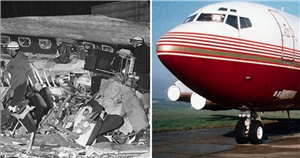 Horrified witnesses watched a plane begin to break apart in midair as it plummeted like a “shot-down bomber” before crashing into Mount Fuji in Japan, killing all 124 people on board.

The Boeing 707, run by British Overseas Airways Corporation, took off from Tokyo International Airport just 25 minutes before it began “spinning down” towards the slopes of the dormant volcano on March 5 1966.

Investigators found debris 10 miles away when analysing the wreckage, as witnesses claimed to see pieces break off the Boeing while it was in the air.

One told the BBC at the time: "The aircraft was flying as high as Mount Fuji and I could see smoke at its tail.

"I heard a bang and afterwards the tail and the main fuselage broke apart and the aircraft began spinning down. Just before impact the nose and the fuselage parted."

A witness told press agency UPI that the plane fell like a "shot-down bomber” as another witness described the airplane "disintegrating about 3,000 feet above me”.

When the aircraft was taking off, it was seen trailing white vapour as it left the airport.

Although witnesses described seeing Flight 911 break apart, it is believed the fatal crash was caused by adverse wind conditions, but it was still a significant safety issue.

At the time, it was believed violent air currents could have caused extreme turbulence near Mount Fuji.

It is believed the pilot was trying to get passengers a better look at Japan’s largest mountain when it was hit with turbulence that resulted in the plane coming apart.

Tragically this was the third fatal plane crash to happen in just over a month by planes at Tokyo airport by American-built aircraft.

The probable cause listed on a report on the Aviation Safety Network said: “The aircraft suddenly encountered abnormally severe turbulence over Gotemba City which imposed a gust load considerably in excess of the design limit."

In February of that year, a Japanese Boeing 727 had crashed in Tokyo Bay killing 133 people.

Less than 24 hours before the Mount Fuji crash, a DC-8 from Canadian Pacific Airlines crashed upon landing at Tokyo with 64 people on board.

According to TIME, THE DC-8 suddenly had sunk 20 feet below the correct glide path as it came into land as the tower operator told the pilot to "Level off,"

However, the plane continued to go too low and the wheels clipped the breakwater at the edge of the runway and reportedly sent it into a cartwheel motion down the field.