A Chinese man has survived after being impaled by 10 large metal spikes in the arm and chest in a work accident.

Each of the sharp steel bars measured 30 centimetres (one foot) in length and 1.5 centimetres (0.59 inches) in diameter, according to a Chinese hospital which treated the factory worker.

Surgeons have removed all of the spikes from the 49-year-old patient’s body through emergency surgery. One of the pins was just 0.1 centimetres (0.04 inches) from a major nervous system. 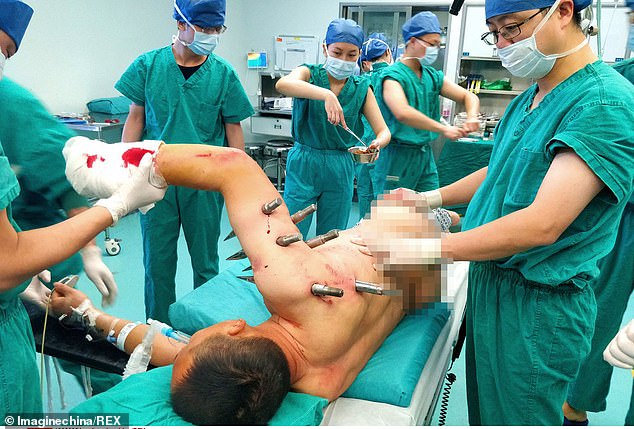 Mr Zhou (pictured), 49, was hit by part of a machine which had suddenly collapsed in China 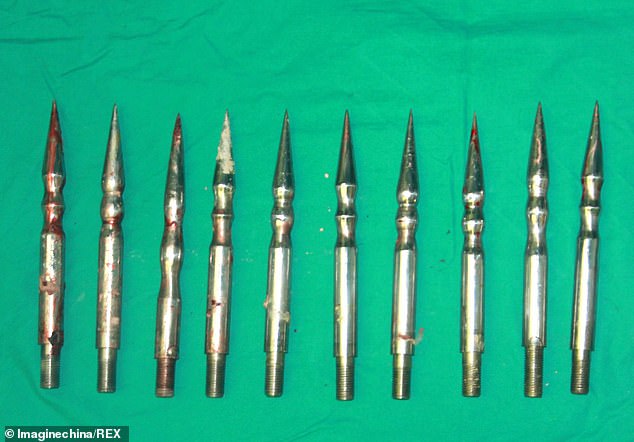 He was impaled by 10 steel spikes (pictured) in the arm and chest, each measuring a foot long

The man is in stable condition, according to the Xiangya Hospital in Changsha.

The victim, known by his surname Zhou, works for a porcelain factory in Zhuzhou in southern China’s Hunan Province.

It is said that the accident took place last Tuesday when Mr Zhou was working a night shift. A robotic arm suddenly collapsed from a machine and fell onto Mr Zhou.

The spikes, which were part of the robotic arm, speared through the worker’s body.

The seriously wounded man was first taken to a local hospital by his colleagues before being transferred to the Xiangya Hospital in the provincial capital. 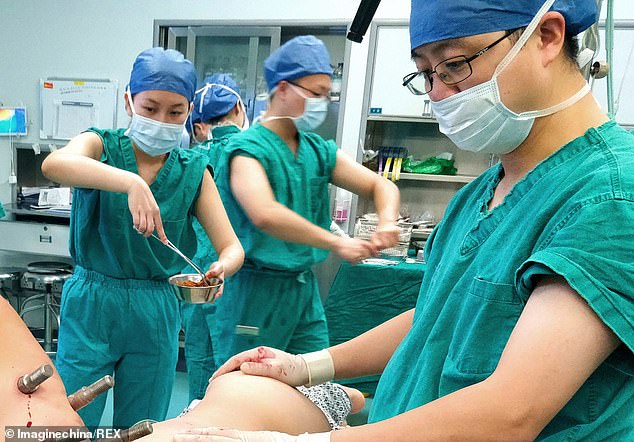 Dr Wu Panfeng, the lead surgeon for the patient, said because the spikes were long and made of metal, the patient could not be given an X-ray scan.

Dr Wu said the man was in critical condition as the spike in his chest could damage the nerves and the main blood vessel on the right side of his body, causing a haemorrhage.

The doctor added that because the patient could not lie down, he had to lean on more than 10 doctors and nurses while having his wounds sterilised.

An emergency operation was carried out at the wee hours of the next day by experts from various departments, including ER, cardiothoracic surgery and hand microsurgery.

During the operation, surgeons discovered that the spike on the patient’s right shoulder was just 0.1 centimetres (0.04 inches) from the main nervous system in the thoracic outlet, the area between one’s collarbone and first rib.