Truck driver’s daughter, 27, ‘who posed as a Russian billionaire heiress’ is indicted for ‘swindling hundreds of thousands of dollars’ as judge blasts her for ‘showing no remorse and being more concerned about who will play her in the movie’

A truck driver’s daughter accused of posing as the daughter of a Russian billionaire to swindle bank loans, trips and hotel stays appeared in a Manhattan court on Tuesday for her indictment.

Anna Sorokin, 27, wore heavy framed glasses and a beige Rikers Island-issue jumper and pants as she was indicted on grand larceny charges at New York Supreme Court while locked in shackles.

Her lawyer then discussed prosecutor matters with the judge, including the lifting of a protective order preventing from seeing documents relevant to her case. 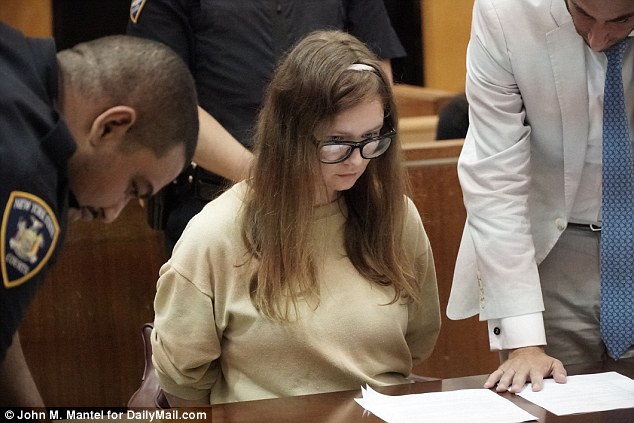 Addressing the removing of the protective order, Sorokin’s lawyer Todd Spodek told Dailymail.com: ‘It is imperative that I be able to share any and all evidence in the case with Ms Sorokin so that she can provide meaningful input into trial preparation.

‘I am pleased that Judge Kiesel and the District Attorney’s office are in agreement as well.’

Sorokin was last in court on June 19, when a judge rejected her lawyer’s proposed deal of a sentence of one to three years imprisonment. A counter-offer of three to nine years in prison was itself turned down by her defense team.

‘She seems more concerned about who is going to play her in the movie than what she’s done to the people she allegedly took advantage of.’

She added that a sentence of just three years behind bars would serve as a ‘mere a slap on the wrist for a crime this serious.’

The defendant now faces 15 years in jail if convicted on all counts. Netflix signed a deal to acquire the rights to her story in June.

Sorokin posed as Anna Delvey, the heiress daughter of a fictitious billionaire Russian magnate and used the persona to dupe elite circles in Manhattan from 2013 until January this year.

She talked banks into lending her money to start the ‘Anna Delvey Foundation’ and skipped out on bills at the end of a weeks-long stays in some of New York’s finest hotels.

She also targeted individuals who she believed would serve her well and got them to pay for things with the promise that she would eventually give them the money back. 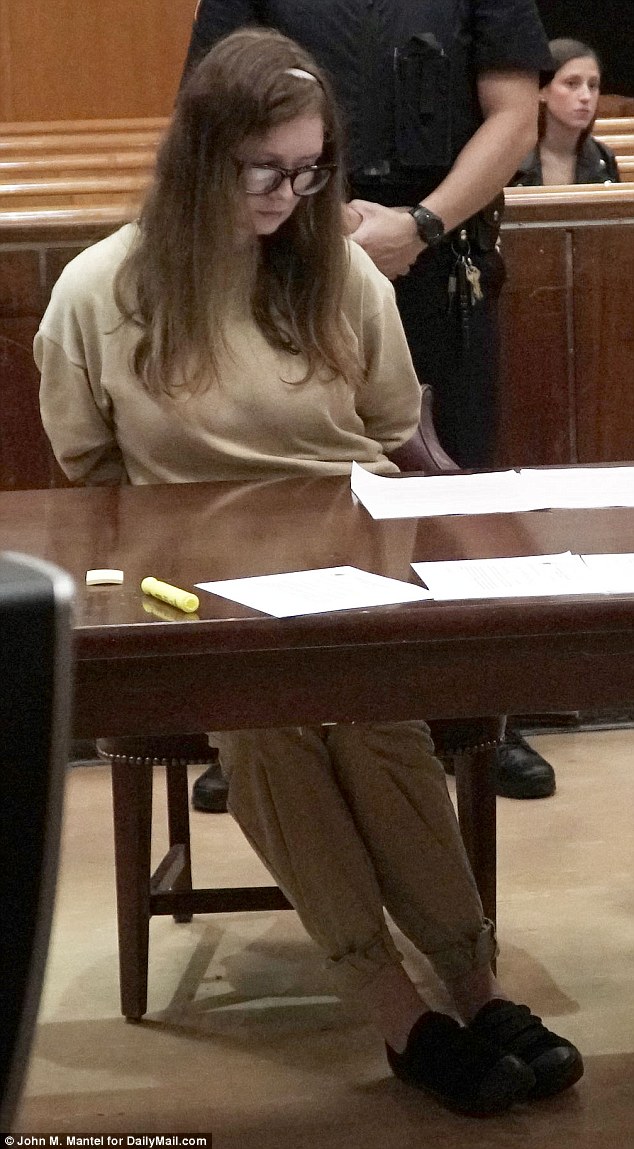 Sorokin’s lawyer (right) then discussed prosecutor matters with the judge, including the lifting of a protective order preventing from seeing documents relevant to her case 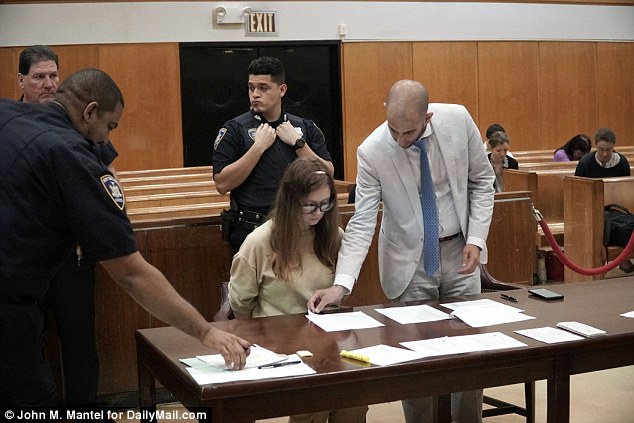 Among them was a Vanity Fair picture researcher whom she convinced to pay $62,000 for a trip to Morocco after her own card was rejected.

Sorokin denies the charges and insists she was always trying to be seen as a businesswoman.

She claims the dinners, at extravagant restaurants like Le Coucou were business meetings and that it was all going towards the Anna Delvey Foundation, an arts-focused members club she planned to open and still speaks about.

In an interview with New York Magazine earlier this year, she said: ‘I had what I thought was a great team around me, and I was having fun.’ 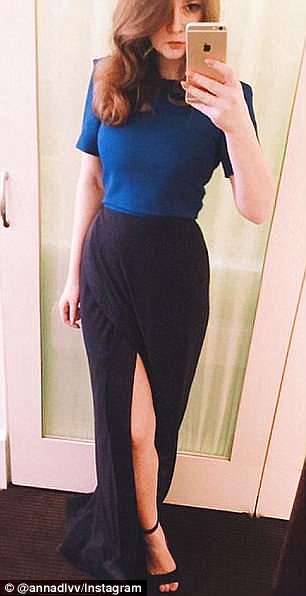 Sorokin is pictured in one of the many Instagram photographs she uploaded as Anna Delvey, before her arrest

She said that while she had done some things wrong, it ‘doesn’t diminish the hundred things I did right.’

Prosecutors say she facilitated her lifestyle by check-kiting – a practice whereby a person deposits bad checks into a bank account then withdraws a cash amount before they bounce.

In May, Sorokin spoke from Rikers’ Island to say it was ‘not that bad’.

She said she had learned not how ‘easy’ it was to steal other people’s identities by watching financial criminals behind bars.

‘This place is not that bad at all actually. People seem to think it’s horrible, but I see it as like, this sociological experiment.

‘There are couple of girls who are here for financial crimes as well.

‘This one girl, she’s been stealing other people’s identities. I didn’t realize it was so easy,’ she told New York Magazine.

Among those who have spoken out about it are some of her alleged victims including staff at the hotel where she stayed.

They told how she tipped with $100 bills and gave off an air of extreme wealth.

One, who was the receptionist at 11 Howard where Sorokin stayed for a month, told how she once attended a dinner she organized for a large group at Le Coucou which included MaCaulay Culkin.

Others described how restaurants began calling them after seeing pictures of them with Sorokin on Instagram and asking to be put in touch with her because she had skipped out on her bills. 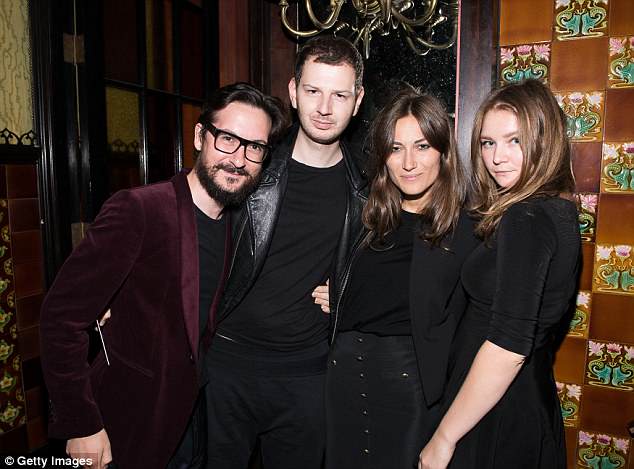 Sorokin (far right) is pictured in September 2014 with Giudo Cacciatori, Gro Curtis and Giorgia Tordini at The Jane hotel

The truth is that she was born in Russia and grew up in Germany as the daughter of a truck driver.

She left Germany in 2011 to move to London where she attended Central St. Martin’s College as a fashion student.

Her father told New York Magazine that they had supplemented her rent and schooling at first and that he was stunned by the news she had been arrested.

‘We always paid for her accommodations, her rent, and other matters.

‘She assured us these costs were the best investment. If ever she needed something more at one point or another, it didn’t matter.

‘The future was always bright,’ her parents, who did not want to be identified, said in an email. 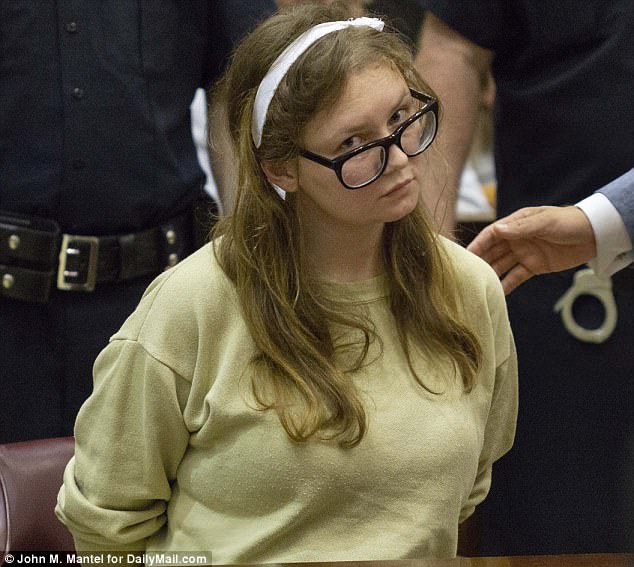 Sorokin was last in court on June 19 when she turned down a plea deal which would have put her behind bars for between three and nine years. She now faces 15 years imprisonment