‘I’m not going to leave them here’: Survivors begin desperate hunt for their families buried under the molten ash of Guatemala volcano which killed 109 amid anger that official search has been called off

Distraught family members are questioning why Guatemalan authorities have suspended its search for victims from the Volcano of Fire eruption that left 109 dead and an estimated 200 more still missing.

A number of survivors are digging through dangerous molten ash themselves in the hope of finding loved ones who have likely perished from Sunday’s blast.

Bitterly enraged locals are accusing response officials of not trying to find bodies. 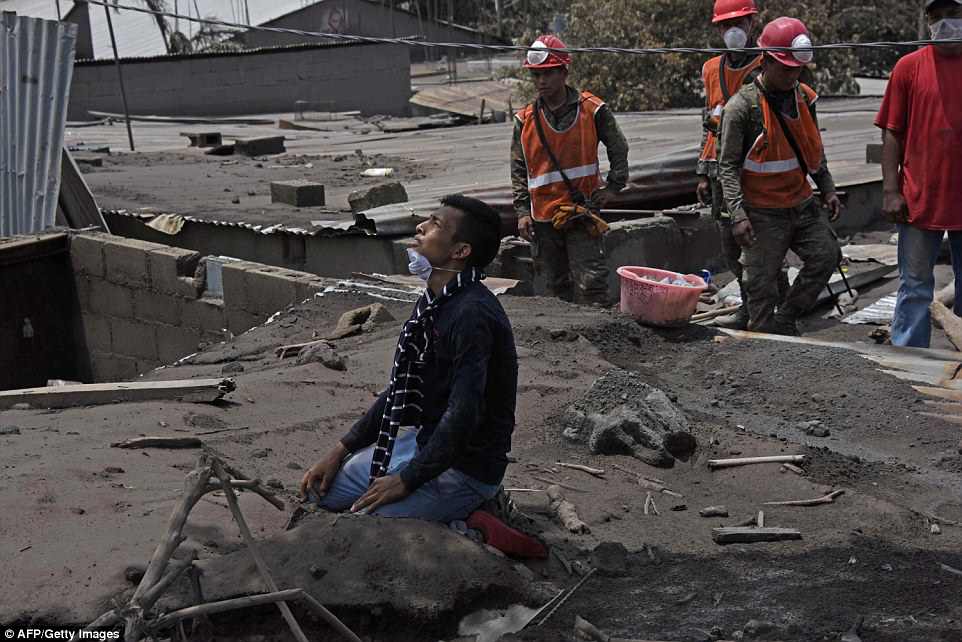 Bryan Rivera, 22, cries as he searches for his relatives, victims of the Fuego Volcano eruption in the ash-covered village of San Miguel Los Lotes 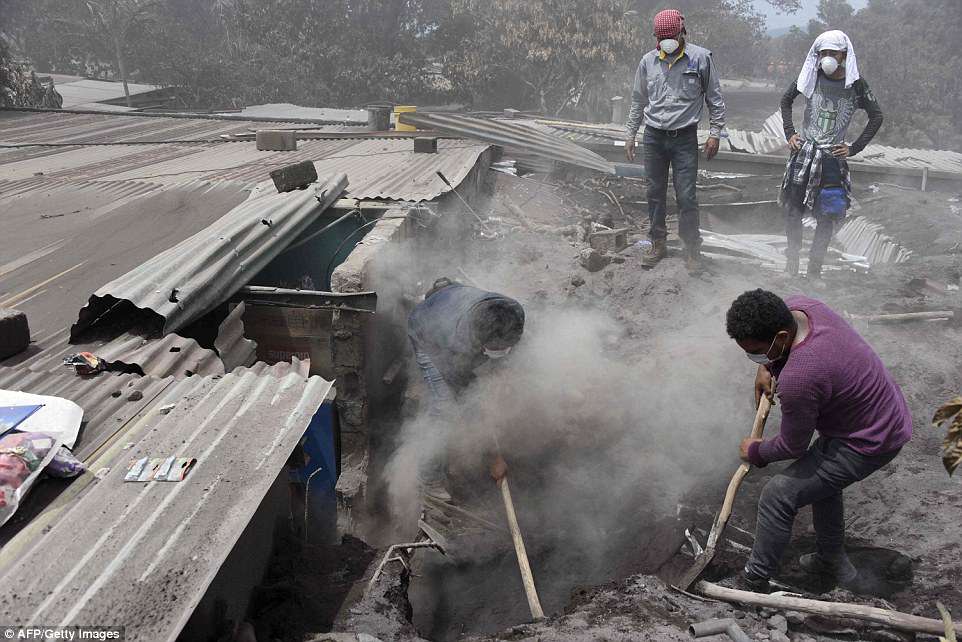 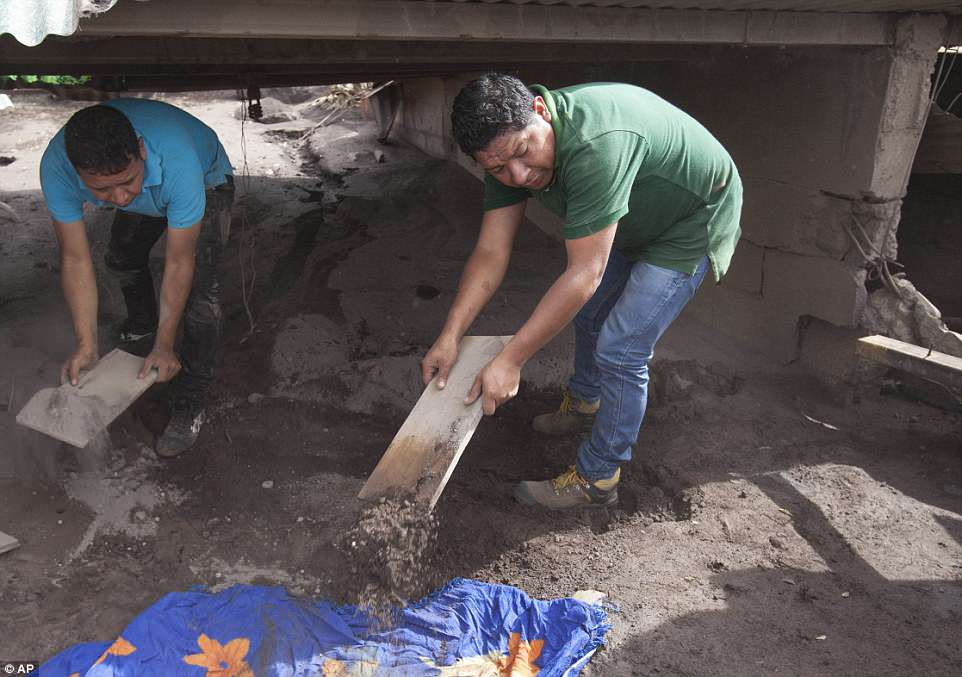 William (left) and Oscar Chavez search for their brother Edgar Otoniel and his family, wife Sandra and son Josue, who are among the estimated 200 victims still missing 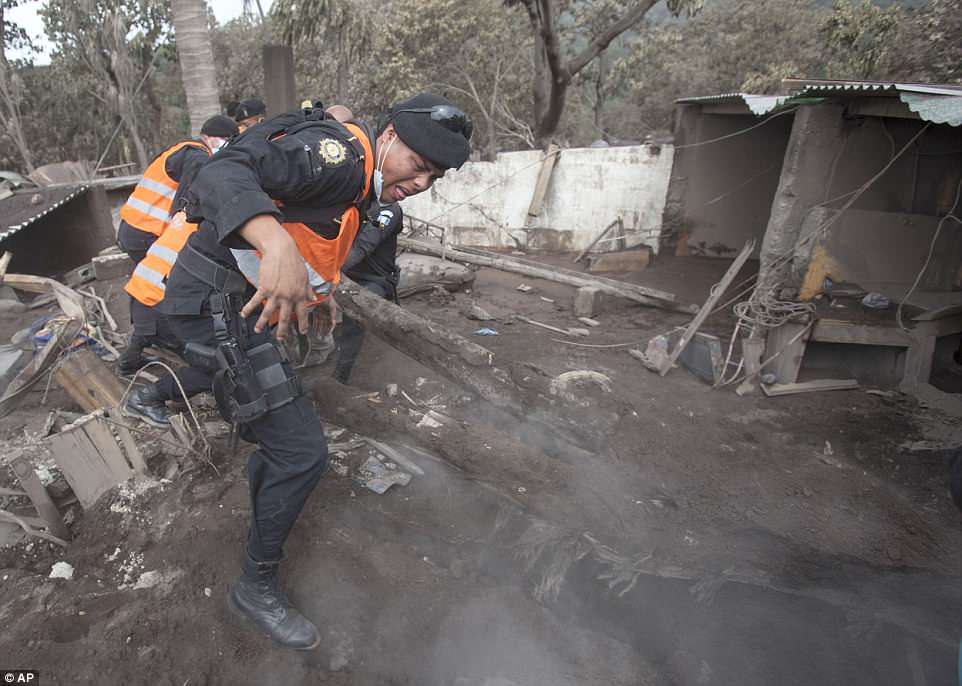 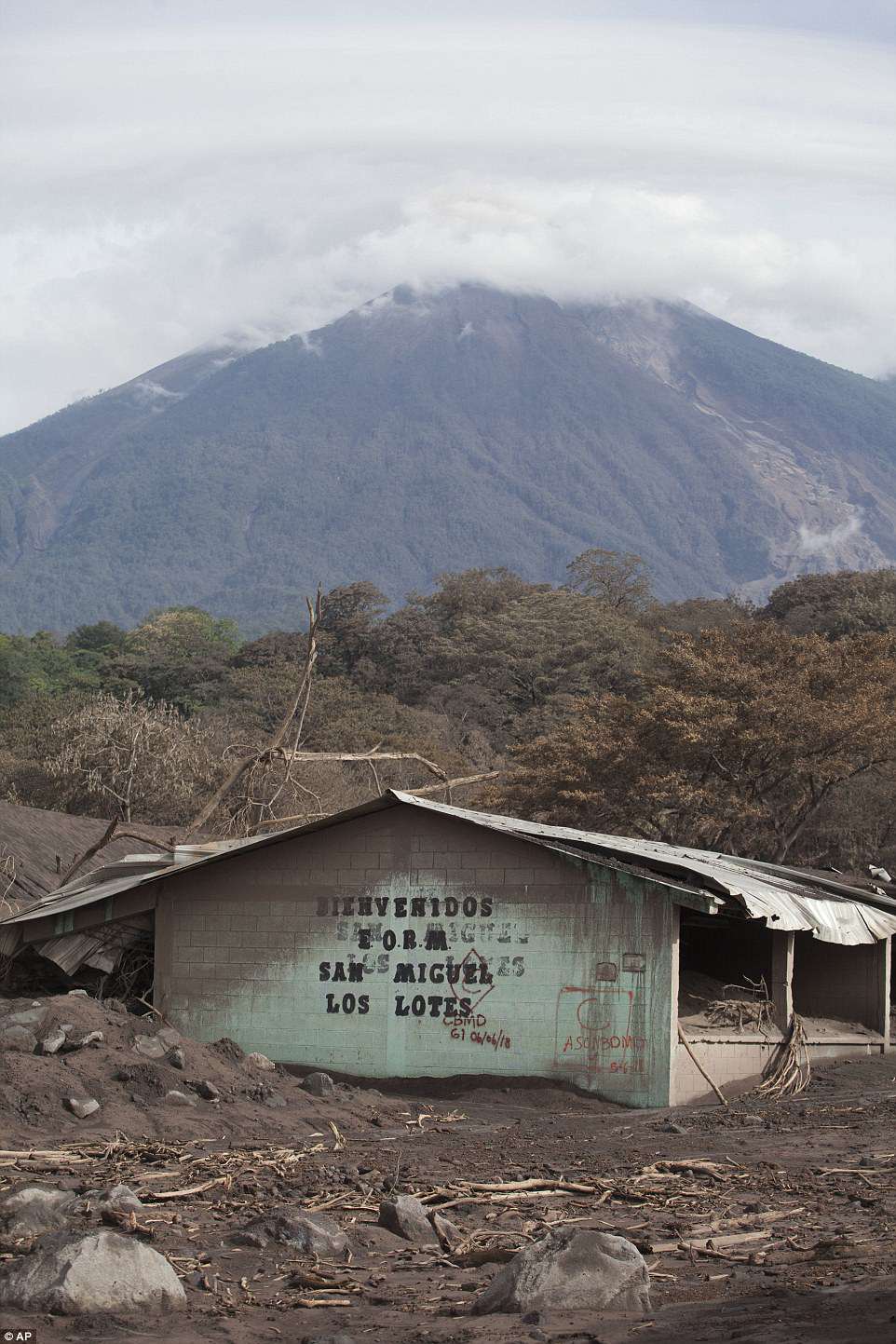 Plant nursery worker Estuardo Hernandez, 19, is certain he knows where his parents are. The knowledge is driving him to desperation.

He’s sure they are buried inside the home where he grew up in San Miguel Los Lotes, covered by ash that swept down the Volcano of Fire into this small community.

Lying on his stomach, he reaches into a narrow space left between the top of a window and the tons of ash now filling the one-story house.

The ash is almost up to the roof, and his efforts are so futile he stops and weeps softly.

Hernandez was talking to his father, Margarito Hernandez, on the phone when millions of tons of volcanic ash tore through a hamlet sitting on the volcano’s slope.

‘He called me at 3:13 p.m. Sunday,’ said the younger Hernandez, who was working in Antigua that day.

‘The last thing he told me was to go far from here … the last thing I could hear was him saying: ‘Get inside! There’s a lot of fire out there.”

Hernandez peers into the narrow open space and points to the back wall of the house, where the lahar hit the structure.

‘That’s where they had the beds. I believe they went there.’ 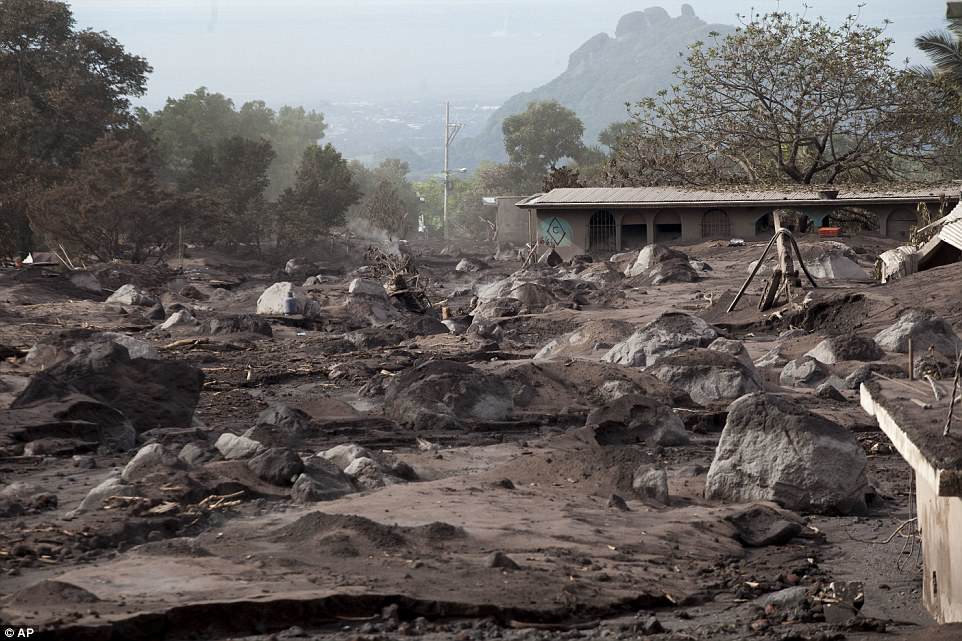 A wave of ‘muck’ rushed in and obliterated houses, leaving families, pets and wildlife trapped in the once green hamlet 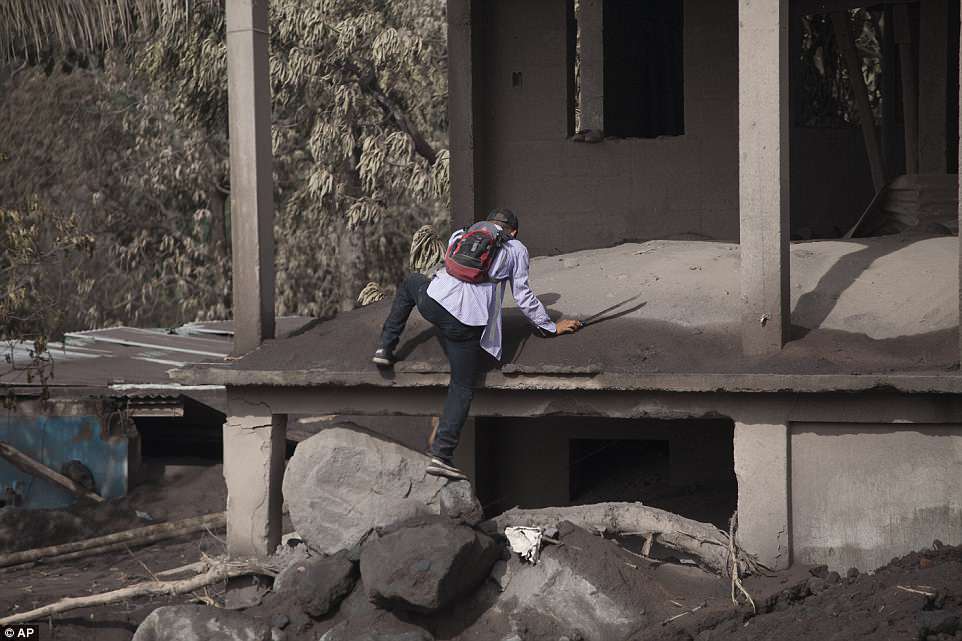 A few houses down, construction worker Alejandro Esqueque, 45, got tired of waiting for the government to recover the bodies of his mother, three brothers and four nieces and nephews.

He organised a group of fellow construction workers and friends Thursday to dig with shovels into the house, which is filled to the roof with ash.

They made the most progress of any of the dozen families who defied police roadblocks to search on their own, and even they got only about three feet down into the mass of rapidly solidifying, still-hot ash.

‘We need a backhoe, but they (authorities) have to authorise it first and they don’t give permission,’ Esqueque said.

He is sure his 69-year-old mother’s body is inside, because she used a wheelchair and couldn’t flee. He’s also sure his siblings wouldn’t leave her.

‘They would never want to leave my mom. They were always with my mom.’ 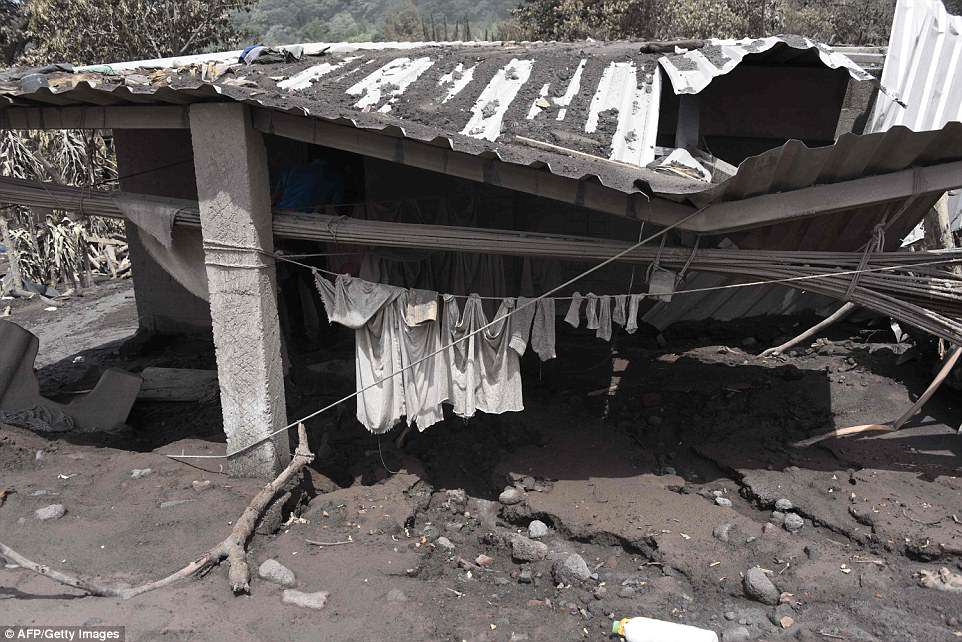 View of abandoned houses in the ash-covered village of San Miguel Los Lotes, which was flooded with hot mud

Orlando Paez plans never to go back to San Miguel Los Lotes, where he narrowly escaped an onrushing river of superheated volcanic ash as his dying neighbors screamed for help.

‘I don’t know what they are going to do with this land, but please, nobody should ever be allowed to live there again,’ Paez said.

A good question is why authorities ever allowed it in the first place.

Nestled on the flanks of the extremely active volcano, the village was square in the path of a gulch that channeled the downhill flow of fast-moving hot rock, ash and debris when the mountain erupted Sunday, burying homes up to their rooftops.

While the volcano hadn’t produced a similar town-destroying outburst since 1974, it has been almost continuously active since 2002, and over the past year, it has repeatedly sent lava or superheated flows of ash and debris running down ravines on its flanks, sometimes for more than a mile (more than 2km).

Still, locals said that since the village was first settled in the 1950s as housing for coffee pickers who worked on local plantations, such rivers of ash and rock had never flowed through Los Lotes.

Residents thought they were safe.

‘Not disaster officials, not anybody, nobody knew what was going to happen,’ said Efrain Suarez, 59, a truck driver who lived in the neighboring village of El Rodeo and whose relatives lived in Los Lotes. 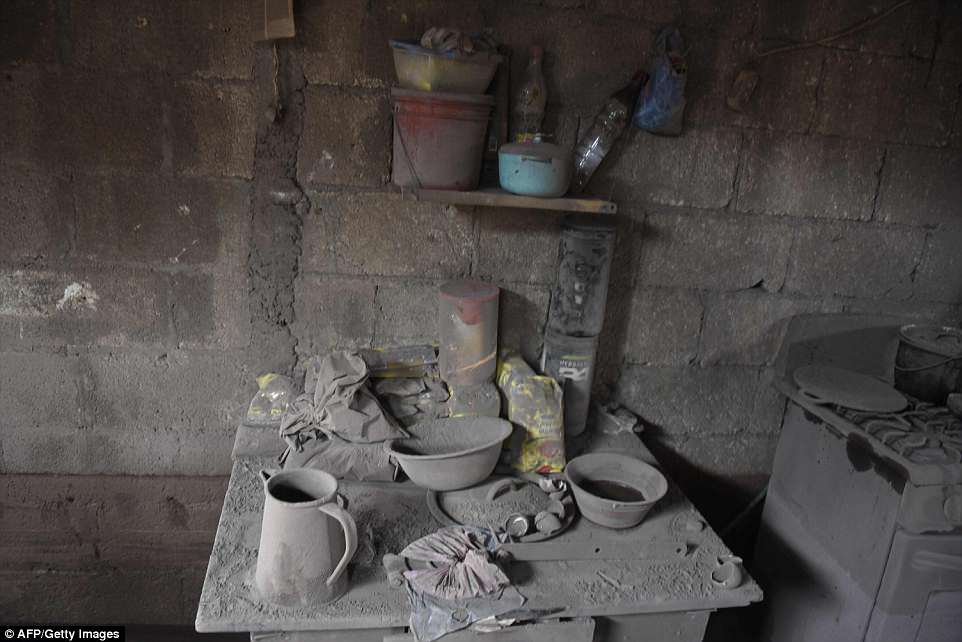 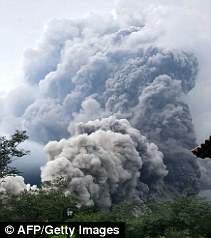 Guatemalan authorities were warned to evacuate citizens from the danger zone surrounding a volcano more than seven hours before it erupted.

Local newspaper El Periodico revealed that from 6:00 am on Sunday, the National Institute of Seismology alerted the National Coordinator for Disaster Reduction about the impending eruption of Guatemala’s Fuego volcano.

During the following seven hours, until the moment of the eruption, the National Institute issued two further warnings which were not heeded by emergency response agency Conred.

According to the newspaper it was not until 1.45 pm, nearly eight hours later, that the Disaster Reduction Coordinator finally raised the level of alert and urged sounded the alarm for evacuations to take place.

Mario Taracena, a senior opposition figure, wants Conred’s boss dismissed and said the government should investigate whether there was criminal negligence.

Guatemala’s disaster agency, Conred, suspended the search several times this week, including for most of Thursday.

Volcanic activity dumped more than a foot of additional rock and ash on the search sites between Wednesday and Thursday and officials worry downpours could destabilise slopes.

Francisco Chavez showed up early with two sons, without tools, to check a collapsed house for a missing son, Edgar Otoniel Chavez, his wife, Sandra Hernandez, and their 4-year-old, Josue.

At first they dug with bits of broken boards and sticks in the thick ash, now turned concrete-like by rain.

Eventually, a few police officers took pity, and instead of running them off, lent them shovels and helped them in the desperate task of digging.

But the huge ash field dwarfed their efforts, and the lack of government help angered them.

‘They are cleaning the highway – the president has commitments to businesspeople.

‘But here, since the people have nothing to offer him, he leaves this part as a burial ground,’ said one of the sons, William Chavez, a 29-year-old accounting student.

Anger was growing at President Jimmy Morales, who made only one brief visit Wednesday to the area.

He didn’t stop to talk to residents or reporters or offer much help. After a few minutes, his convoy sped off to a waiting helicopter.

‘Why did the president come if he didn’t bring anything?’ said Gloria Esperanza Lopez, 35, who brought tamales to donate to residents and rescue workers, but wasn’t allowed to pass a police checkpoint.

‘How could he come with empty hands when we come with at least a tamal?’

At a shelter set up in a school in the nearby city of Escuintla, Nohemi Ascon, 41, waited Thursday.

She is the aunt of six children aged one to eight who died in Los Lotes.

A photograph taken shortly after the disaster showed their bodies huddled together on a bed in the corner of a room, covered in white ash and blood.

She said other relatives are missing.

‘My father, my mother, my sisters are there,’ she said, upset over the decision to again suspend the official search.

‘It is their job. It is not right that they leave them there. They should get them out so we can take them to the cemetery.’ 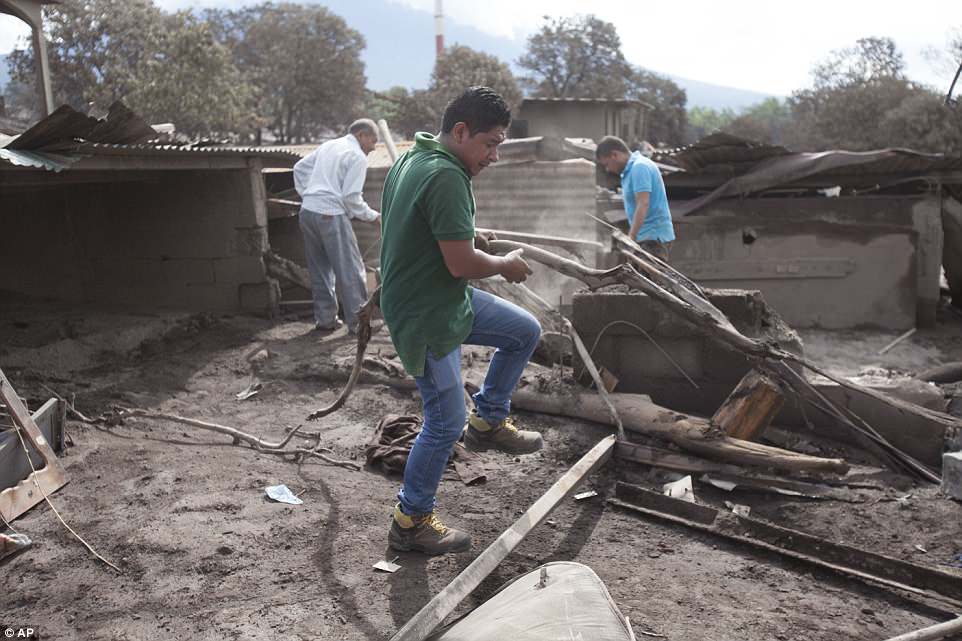 Oscar Chavez (centre) and his brother William (right) and father Francisco, search for their brother Edgar Otoniel and his family, wife Sandra and son Josue 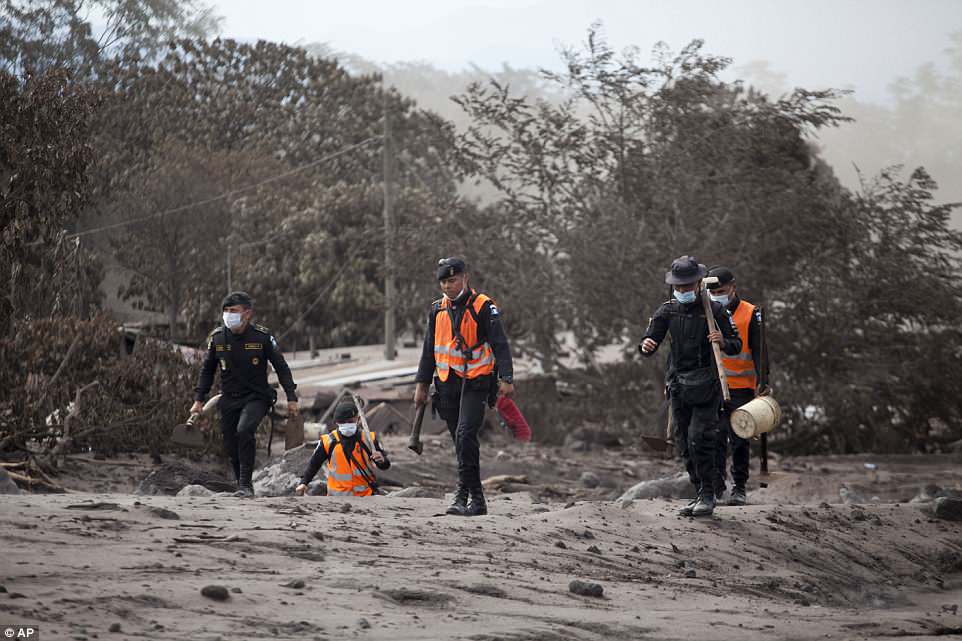 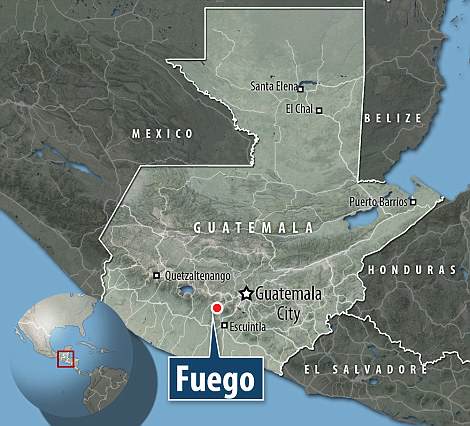 The volcano is in the Central American country’s south, southwest of the capital Guatemala City

Conred, the national disaster agency, said climatic conditions and still-hot volcanic material were making it dangerous for rescuers, and it was also taking into account the fact that 72 hours had passed since Sunday’s eruption.

That is the window beyond which officials had earlier said it would be extremely unlikely to find any survivors amid the ash, mud and other debris that buried homes up to their rooftops.

Guatemalan prosecutors ordered an investigation into whether emergency protocols were followed properly, as many residents were caught with little or no time to evacuate.

Troublesome downpours and more volcanic activity had been hindering searches, but when teams have been able to work in the hardest hit areas, the death toll has continued to tick upward.

The official number of confirmed dead was raised to 109 in the early evening, with about 200 more believed to be missing. 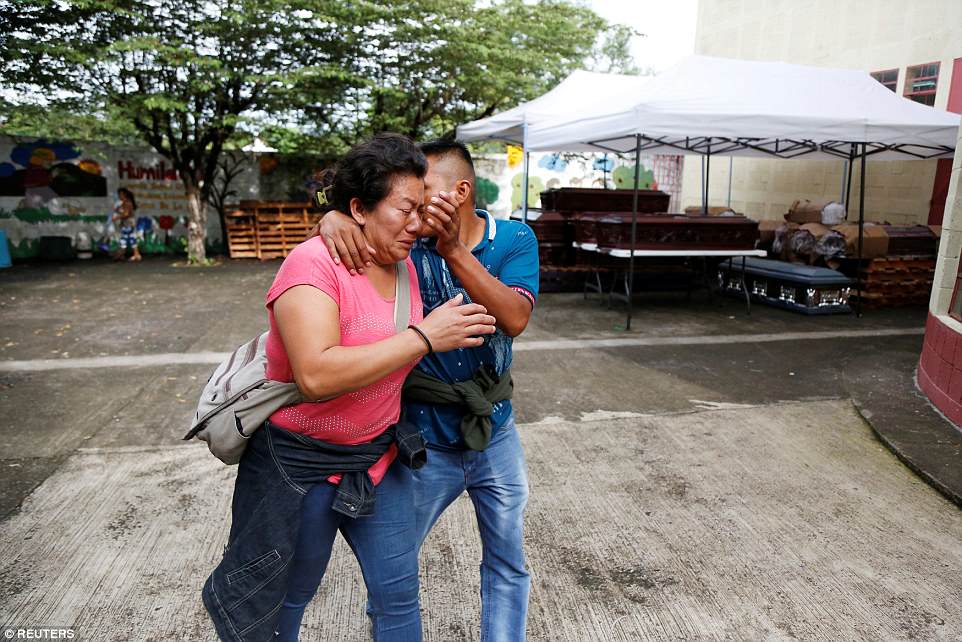 Bertilia Hernandez (left) who lost parents, brothers and nephews during the eruption of Fuego waits outside the morgue of Escuintla, Guatemala 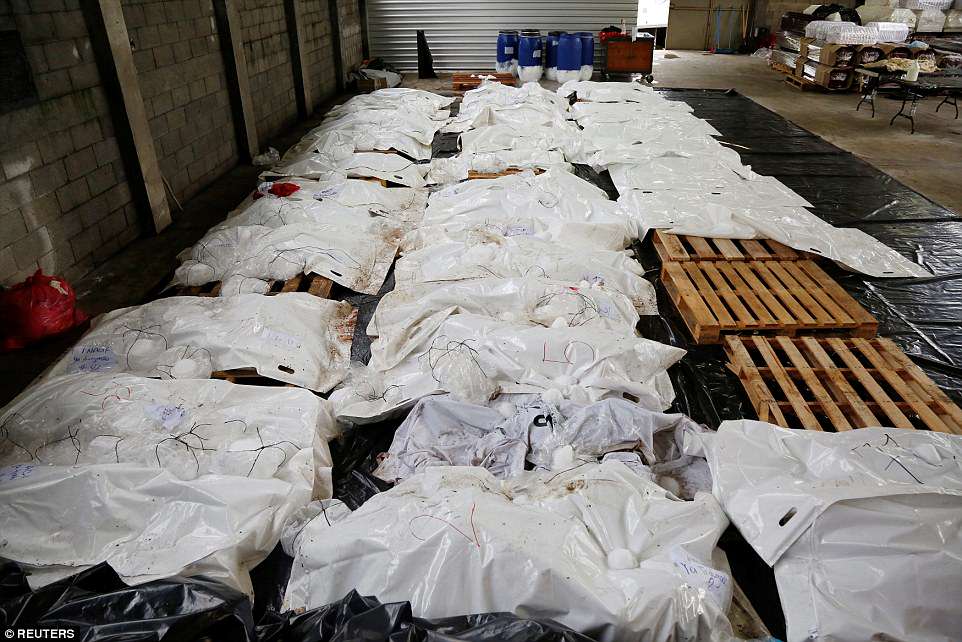 Bodies of victims who died during the eruption lined in the morgue. A lot of the dead still remain unidentified 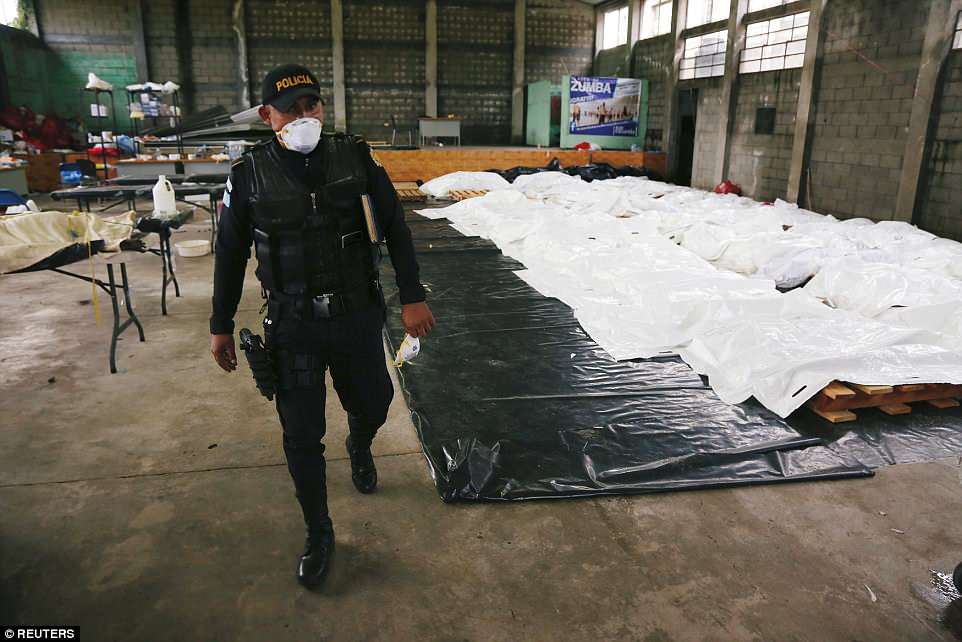 A police officer walks near the bodies of the deceased

At a shelter set up in a school in the nearby city of Escuintla, workers fastened colourful ID bracelets on the wrists of people who were among several thousand displaced by the eruption.

The United States announced it was sending emergency aid, including financial resources, to help meet food, water and sanitation needs.

White House spokeswoman Sarah Huckabee Sanders offered ‘deepest condolences’ to victims and said the aid was being provided at the request of the government of Guatemala.