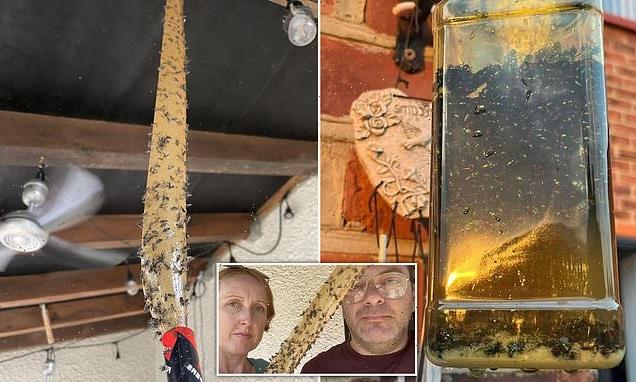 Britain in the grip of FLY invasion: Families share pictures of homes hit by swarms of bluebottles as experts say perfect conditions of long dry spell followed by rain has seen them thrive

The UK could be seeing a fly invasion this summer as communities up and down the country find swarms of unwanted house guests.

In the UK, house flies most commonly increase in June and disperse at the onset of colder weather in October.

ARE YOU INUNDATED WITH FLIES IN YOUR HOME?

But a summer heatwave with the UK’s highest ever-recorded temperature may be helping insects breed and sustain longer lifecycles.

Pest experts say some areas may find they are seeing increases in species after a mild winter and hot summer, although ‘specific’ factors in areas are likely to be the primary cause.

Families in Darlington, County Durham, say ‘thousands’ of insects landed in their homes, clinging to doors and attracting maggots.

Hundreds of people throughout the town have been forced to swiftly act to remove the insects, with some creating DIY traps to crackdown on the issue.

Pictures show long strips of fly tape covered in the insects and electric fly traps filled to the brim with pests. 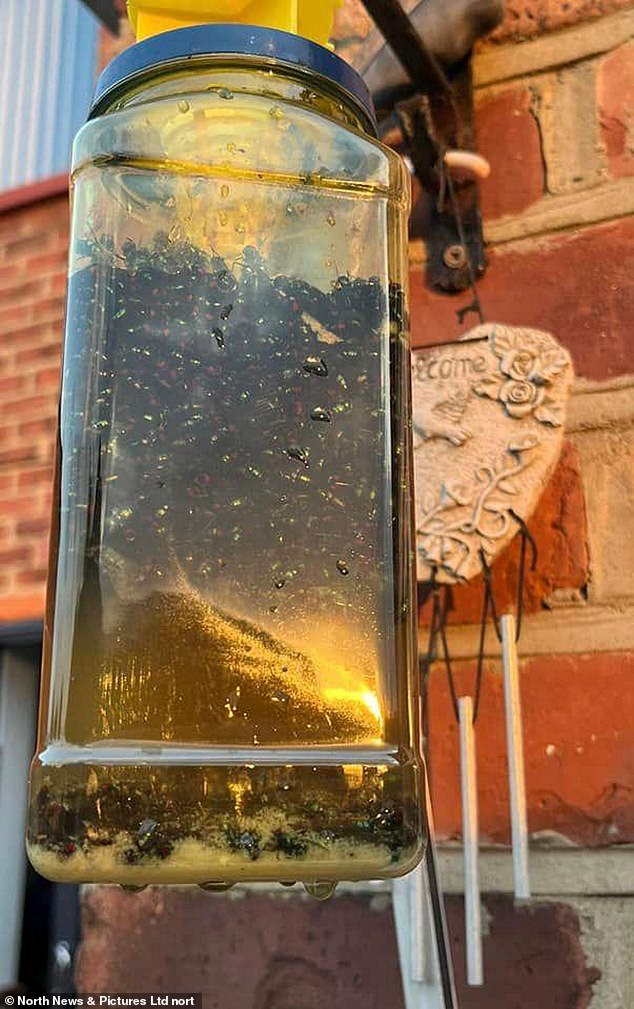 A fly trap outside a home in Darlington, Country Durham, is filled to the brim with captured flies 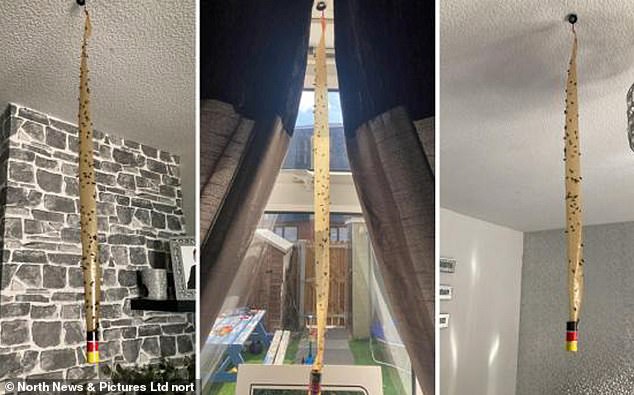 It is feared the source of the infestation may be linked to a local scrapyard.

Resident Shirley Howarth has purchased an outdoor-hanging fly trap after seeing an increase in flies in and around her house.

She said: ‘The flies are really terrible this last month but at the weekend was the worst.’

Gemma Musgrave hung fly tape from the ceiling in her living room and kitchen in her home at Lingfield Point and quickly found they became full.

One woman said the fly issue has led to maggots in her outdoor bins.

‘The flies are ridiculous,’ she said.

‘I opened my wheelie bin yesterday and thousands of them flew out and I could see maggots despite me bagging all rubbish and having it cleaned regularly. I’ve lost count how many have been in the house today.’

A Darlington council spokesman said the source was thought to be a local scrapyard and urged residents to report issues to the Environment Agency. 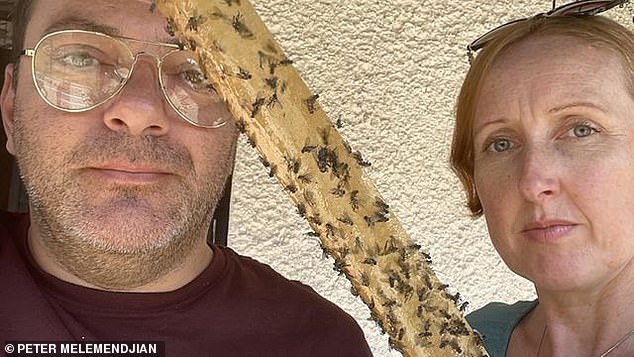 Peter and Anna Melemendjian say they and their neighbours in the village of Little Ellingham, Norfolk, are being ‘driven crazy’ by flies 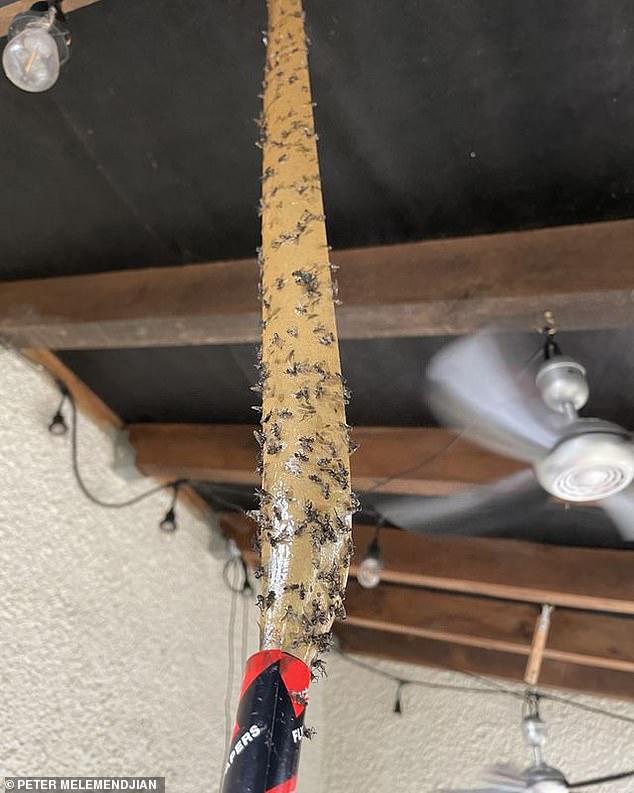 The couple say swarms of flies invade homes and get in people’s clothes, faces – and even in their ears and up their noses

Some 250 miles away in Dursley, Gloucestershire, council tenant Nick Longney, 65, said this year has been the ‘worst’ for flies, The Gloucestershire Gazette reports.

He produced long strips of masking tape hanging from inside his home, all off which were covered in flies.

Mr Longney said: ‘If you walked into my house right now you would walk straight back out again.

‘I made a salad the other day and went outside and within seconds at least 30 flies covered the entire meal.

‘A neighbour was in tears when we spoke about the problem.’

A Stroud District Council environmental officer said ‘it is clear that the fly numbers are significantly higher than usual’.

Local authorities have a duty to investigate fly infestation in commercial premises, but not the general environment.

Peter and Anna Melemendjian of Little Ellingham, Norfolk, said the problem of house flies had become unusually unpleasant for their village after the hot weather this summer.

Mr Melemendjian said he and his wife typically used netting to stop flies coming through doors and windows.

‘They’re really clever little things – and it only takes a few of them to get in the house for there to be more in the house, because they hide and poo on the walls.’

‘You can’t really have any doors or windows open. It would be lovely to [open them], but if you do, the house is full [of flies].

‘Eating, inside or out – if you’ve got them inside – can be a nightmare. There’s almost always flies buzzing around you. The fly tape that we put up two days ago looks like fly soup – it’s really bad.’

A South Norfolk Council spokeswoman said the authority has ‘received an increased number of fly complaints in the Great Ellingham and Little Ellingham area’ but were unable to identify a source.

She added: ‘We believe that the current weather conditions will increase life cycles and the number of insects present.

‘We fully appreciate the impact this is having on local residents and will continue to do all that we can in respect of this issue.’