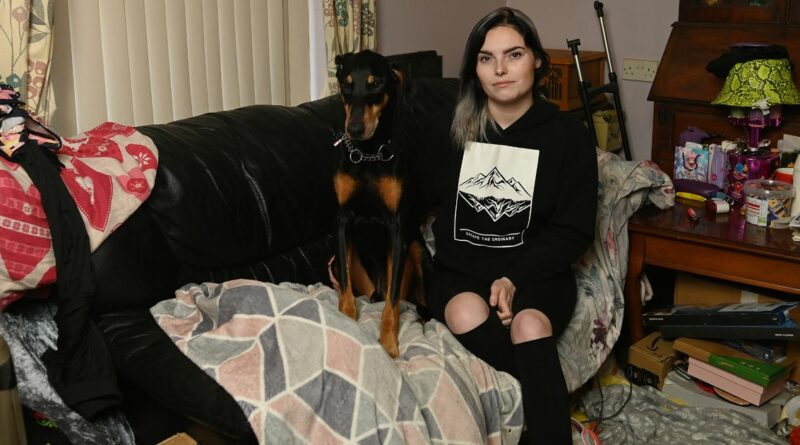 A family is facing a Christmas from hell as black mould has taken over their home.

Sue Scott, who has a number of serious health conditions, lives with her two daughters, Lisa and Shannia, in Gunnislake, Cornwall.

Shannia, who is the primary carer for both her mum and sister, first noticed the hole in the roof in January this year and after several complaints to the housing association it is still yet to be resolved, PlymouthLive reports.

Discussing her shocking find, Shannia said: "I noticed a lot of black mould in my younger sister's bedroom and it was wet like the floor felt wet and the wall was damp.

"So, we were trying to figure out where it was coming from and due to another reason, I had to go up in the loft and I could see daylight coming through. I noticed there was a hole, which is directly above my mum’s bedroom."

Cornwall Housing, which manages social housing properties on behalf of Cornwall Council, sent a contractor out to visit the property.

After inspecting the damage Shannia says she was told by the contractor that the "roof was unsafe" and possibly not even attached to the structure beneath.

However, after his initial visit Shannia says the authorities have come up with "excuse after excuse" as to why they can't fix the roof.

Cornwall Housing has apologised to the family and explained a backlog caused by the pandemic is the reason why the damaged roof still has not been repaired.

Shannia explained how much destruction has been caused to her mum's room, which sits directly beneath the hole.

She said: "The water damage in my mum’s room is visible, the wall is actually starting to crumble on the inside.

"Sentimental and very old furniture has actually been destroyed – the legs have just corroded away."

Each member of the family suffers from severe asthma and the family's health issues are only made worse by being made to live in an environment infested by "thick black mould".

Shannia said: "We’ve all had very bad asthma and we’ve become ill because of the damp in the house. Our doctors actually wrote a letter to our council to say how ill our health had become.

"My sister's bedroom is so full of black mould I had to clean it myself, she can’t use that room because it's too damp and cold.

"With her having severe asthma she cannot sleep in there, she’s up half the night coughing and struggling to breathe."

With a lump in her throat, Shannia described the emotional turmoil and distress she and her family have faced.

She said: "I personally struggle to be here, it’s mentally draining for all of us.

"You go to sleep at night wondering if the roof is going to cave in, we just don't know how safe or unsafe it is."

After the distress caused by the hole in the roof Shannia and her family have decided they want to move back to Derbyshire, where they are originally from.

A spokesperson from Cornwall Housing released the following statement: "We are sorry that Ms Scott has had a delay in repairs to her home.

"Due to restrictions caused by the pandemic, we are still working to deliver a backlog of works on our properties which is continuing to have an effect on our scheduling.

"We are working on an action plan to ensure this doesn’t continue in the future. Our contractor will be in touch today to see what can be done until we can complete the works in the new year.

"Scaffolding will be erected next week and we anticipate the work, to re-roof the property, will be started by the end of the first week in the new year."