London: Brexit Party leader Nigel Farage has given Boris Johnson’s chances of winning majority government by Christmas a boost by declaring his party will not contest any of the 317 seats the Conservatives won at the previous election. 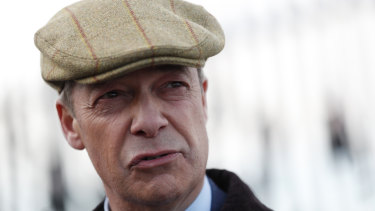 Nigel Farage, leader of the Brexit Party, has given Boris Johnson some welcome news.Credit:Bloomberg

Instead, Farage’s party would “concentrate our total effort into all the seats that are held by the Labour party… and we will also take on the rest of the Remainer parties”, he said on Monday.

“We will stand up and fight them all.”

Farage said giving Johnson “half a chance” in fighting off Liberal Democrat challenges in the south of England would prevent a second referendum from happening.

He said his strategy relied on Johnson’s commitment to ending the post-Brexit standstill transition period at the end of 2020 with a more arms-length trading relationship with the EU. 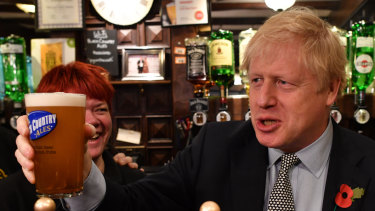 Something to cheer about: British Prime Minister Boris Johnson raises a pint of beer on the campaign trail. Credit:Getty

UK election expert John Curtice said the decision could tip the balance in favour of the Conservatives in a handful of seats they had risked losing to the Liberal Democrats in the south of England.

However contesting seats in the north could help to stem a predicted spate of Labour losses, by splitting the Leaver vote.

If the Brexit Party picks up a handful of the northern marginals it could leave them holding the balance of power in a new hung parliament.

Former Conservative leader Iain Duncan Smith said the Brexit party needed to recognise “that even standing across the board in [Labour-held] seats will also end up helping those Labour incumbents who are sitting there worrying at the moment about the fact that they have a very large Leave vote”.

“If that is split then that means [Labour] might just sneak through, which could be the difference between us winning a majority and only becoming the majority party.”

Boris Johnson said the decision was “recognition that another gridlocked hung parliament is the greatest threat to getting Brexit done”.

He insisted he had “absolutely not” called Farage to agree a deal.

But Labour Party chair Ian Lavery said the decision was a “Nigel Farage and Boris Johnson alliance with Donald Trump to sell out our country”, urging voters to “reject this Thatcherite 1980s tribute act”.

And the decision to stand down hundreds of Brexit Party candidates was not welcomed by all Farage supporters.

Neil Greaves – who had been due to stand for the party – told a local newspaper Farage had "let Brexiteers down".

"I don't regard Boris Johnson's deal as Brexit… it's not even close," he said, adding he would still stand in his Essex constituency as an independent.