Father, 25, who threatened to rape, kill and dismember his ex’s new lover in bitter feud over their daughter walks free after court hears he’s ‘got to pull his socks up’ for new baby on the way 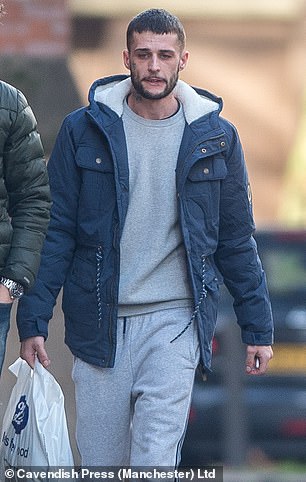 A father threatened to have his former girlfriend’s new lover raped, murdered and dismembered during a bitter feud over their baby daughter.

Daniel McGrath bombarded his ex-partner Jade Halls with phone calls threatening to sexually assault her unnamed partner and warned he would have her father abducted and raped.

But the 25-year-old, who is now expecting his second child with a third woman, walked free with 10 months jail suspended for two years.

When police intervened he put on a mock ‘Godfather’-style gangster accent to irritate officers as they fielded one of his nuisance calls.

McGrath also drew up in a car outside Jade Halls home honked the horn and said: ‘Get your man outside or I will kick the door off – I am going to slice him up and put him in my boot.’

At Minshull Street Crown Court, McGrath who now lives with his grandparents in Wythenshawe, Manchester, admitted malicious communication and was found guilty of common assault and harassment after a trial.

The incidents took place in June this year after McGrath and Miss Halls who lived together in Stretford broke up with she alleging she was a victim of domestic violence.

He had a previous conviction for hounding a different girlfriend in 2015.

The pair went to a see a social worker about day-today living arrangements for their baby daughter but ahead of the meeting, McGrath tried to grab the child’s pram off Miss Halls then shouted at her: ‘you’re a stupid b****h.’

Jade Halls, pictured with McGrath, who bombarded her with calls threatening to sexually assault her unnamed partner and warned he would have her father abducted and raped 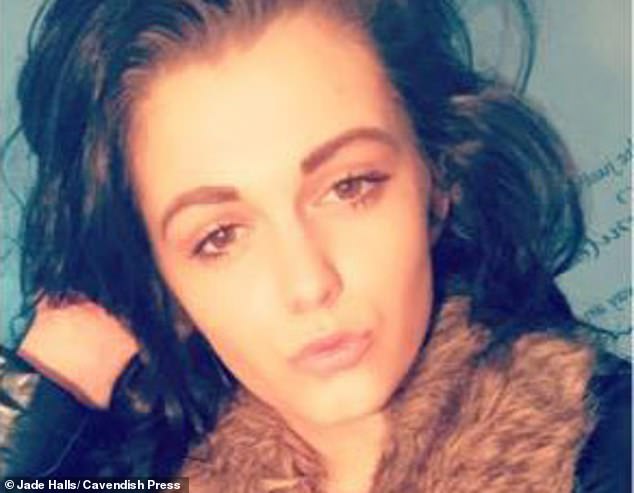 The court heard Miss Halls (pictured) received 22 missed calls and when she answered the last one, McGrath said he would rape her boyfriend, then made further threats towards her father

Prosecuting Miss Lisa Boocock, said: ‘She went into the meeting and then, when it had finished, she hid in the baby changing toilets until an employee told her it was safe to leave.

‘Later that day, she was talking to a male friend in town and the defendant’s mother drove past. He then wound down the window and spat at the complainant.

‘The spit did not connect with her, but she was disgusted that he did it. The defendant then got out of the car and ran across the road towards them.

‘The complainant backed away and was frightened. McGrath shouted at the male friend ‘get your trampy hands off my daughter.’

‘He continued to shout ‘you little s**g’ and he caused such a scene that a few cars stopped. McGrath was screaming at them for a long time and Jade Halls walked away. She then contacted the police and he was arrested.

‘But on June 22, she received a message on her old Facebook account from McGrath while he was on bail, saying about her new partner ‘if I see you both together, I will kill him.’

‘On June 29, the complainant was walking to her grandmother’s home with her new boyfriend and she saw two of McGrath’s friends on the street. it was clear they subsequently contacted the defendant because she heard a car horn and he was outside.

‘He said ‘get your man outside or I will kick the door off.’ She went outside to avoid damage to her grandmother’s house but he then said ‘I am going to slice him up and put him in my boot.’

‘He said he would get his own girlfriend to kick her teeth down her throat. He then drove off.

The next day, the court heard, Miss Halls received 22 missed calls and when she answered the last one, McGrath said he would rape her boyfriend, then made further threats towards her father.

In a statement Miss Halls said: ‘His behaviour has caused me to suffer from panic attacks. I just want to move out of the area because I am scared of him. I am nervous about living in this property as I don’t know if he has a key and he could come in at any moment. I can’t have a new life, I have had to block him on Facebook.

‘I am scared for my safety, I don’t know what he will do next. I am also scared for my family’s safety as he has threatened them too.’

McGrath was previously ordered to attend a programme about ‘improving relationships.’ after he bombarded a 19-year old girl with 700 abusive calls and texts in just 23 days after she dumped him.

Some of the texts said ‘You need to die’ and ‘I am going to strangle the life out of you’.

In mitigation his defence lawyer David Thomson, said: ‘In the case of this offence, there was no actual violence used.

‘The defendant suffers from Aspergers and ADHD – somebody with that condition can act in a way that causes them to struggle with relationships.

‘None of these offences were preplanned. The first in June was a mistaken encounter. He saw he with another male and jealousy, to some extent, got the better of him.

‘The frustration for him was not being able to see his own baby. Social services had got involved and they told her about his previous conviction for harassment and it was that, that started the deterioration of their relationship.

‘He has moved on from his previous relationship has a new partner who is almost three months pregnant. So, he has got reason to pull his socks up and do the best that he can.’

But Judge Stuart Driver QC told McGrath: ‘Your ex-partner, a young woman with a child, was spat at, abused and received violently threatening messages.

‘You were given bail and then you made horrible threats to rape and kill people. Even for people with no previous convictions, you could be given a sentence of imprisonment.

‘But I do take into account that you pleaded guilty to some offences, and you do have learning difficulties which I can see are intrinsically linked to your offences. I hope your current partner knows the full extent of your unpleasant behaviour.’

McGrath was also made subject of a restraining order banning him from contacting Miss Halls.

He was also ordered to abide by three month curfew between 8pm and 7am.