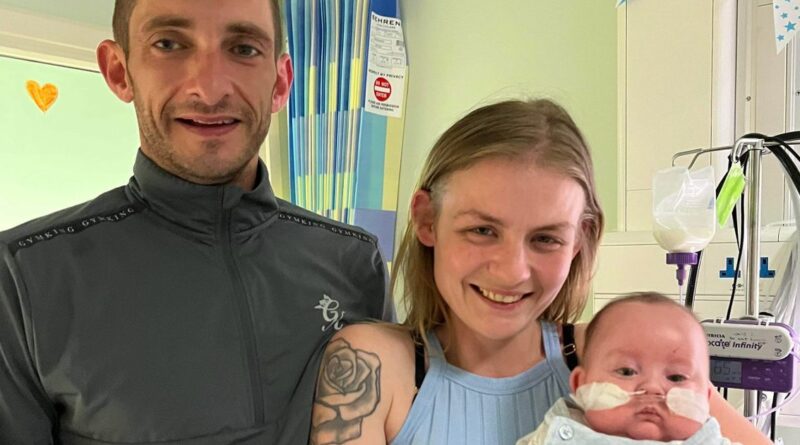 A father has recalled the moment his "heart froze" when a doctor asked him to choose between his unborn baby or his wife to be.

Stephanie Brown, 29, was pregnant with the couple's sixth child when she started leaking amniotic fluid before the umbilical cord collapsed, endanegring she and her unborn child.

Michael Gerry Fotheringham McConnell, 33, from Falkirk, Scotland, already a father to Keira, Rebecca, Lacey, Winter and Thomas, was then faced with a huge decision.

"The doctor that would deliver took me to one side and asked, 'if push comes to shove, who survives? Mother or baby?'" he recalled.

He didn't choose, and instead the couple went ahead with the dangerous birth and welcomed Mickey Robert in November last year.

He weighed less than a bag of sugar at just one pound and three ounces.

After eight months, on July 24, he died after contracting methemoglobinemia, a blood disorder in which too little oxygen is delivered to your cells, while still in hospital.

Mickey's lungs were too small for his body and not in proportion to the rest of his organs, Mail Online reported.

They were told by doctors that the child wasn't going to make it to full term. When Stephanie went into give birth, the parents and doctors knew something was wrong.

Michael said: "The room was full of midwives and doctors, who revealed the umbilical cord had collapsed, creating a dangerous situation.

"I was terrified when I saw all these people and the looks on their faces told me the severity of Stephanie's condition."

"When I learned my fiancée's life was in danger, my heart froze – all I cared about in that moment was her being OK."

He added that the relief was massive when he heard his son cry for the first time, in the operating theatre.

"We were in awe, it was so clear and loud. In that moment, the relief was massive."

However, his condition deteriorated and he never made it home, despite him showing promise in the neonatal intensive care unit at Wishaw General Hospital.

The child passed away in his mother's arms, having met his siblings.

"He was suffering, now he's at peace, shine bright my wee warrior. Rest in peace our beautiful son," his dad said.