Distressed father-of-two, 30, leapt from a bridge after police released his photo as part of a rape investigation

A distressed father-of-two jumped 120ft to his death after police identified him as part of a rape case.

Mwitumwa Ngenda, 30, was found on the edge of Rainbow Bridge over the M62 near Huddersfield in the early hours of August 28 last year.

PC Michael Caulfield told Bradford Coroner’s Court how he desperately tried to talk him down before he jumped.

Yesterday’s inquest heard how Mr Ngenda’s picture had been published by Greater Manchester Police in connection to an alleged rape case on July 8.

He immediately handed himself in for questioning but vehemently denied the offence.

The hearing was told he borrowed his sister’s car and drove to the bridge where he eventually died on the morning of August 28. 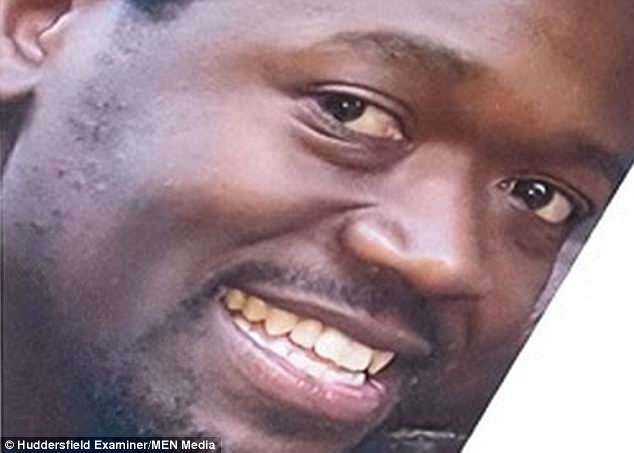 Mwitumwa Ngenda (pictured), 30, was found on the edge of Rainbow Bridge over the M62 near Huddersfield in the early hours of August 28 last year. He later jumped to his death

His father Dr Love Mwitumwa Ngenda and mother Gladys, along with his ex-wife Beth Morgan, listened to five hours of evidence about how their son’s death in Scammonden near Huddersfield.

Although he was a bubbly and much-liked bank worker at the Royal Bank of Scotland in Manchester he had a history of depression and suffered anxiety attacks, the inquest heard.

Coroner Martin Fleming heard how PC Caulfield was scrambled to the scene after reports of a man on the bridge.

In written evidence read to the court he told how he did everything possible to avoid him leaping and how he had recorded their conversation on his body camera.

The officer asked Mr Ngenda to tell his story and he spoke about the rape allegation which was made on July 8.

The officer said: ‘Someone had made an allegation and it would be in the papers.

‘I said I would spend all day there if required. He said he didn’t want to be arrested and in handcuffs.

‘He told me to step back. At one time I managed to get him to smile.

‘He didn’t come back over the barrier and at 7.40am he let go and fell from my sight onto the carriageway.

‘I was shocked at what had happened and I composed myself as best I could.’

Later Mr Ngenda’s parents watched their son’s final, harrowing conversation with the officer as recorded on his body camera.

A transcript of the remarks was then read to the court which were described by Mr Fleming as ‘undeniably the most distressing transcript I have had to listen to. A desperately sad case.’ 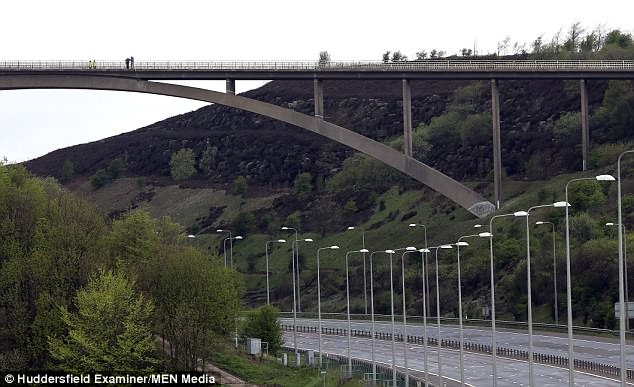 His inquest heard how Mr Ngenda’s picture had been published by Greater Manchester Police in connection to an alleged rape case on July 8, just over a month before he fell from the Rainbow Bridge over the M62 near Huddersfield (pictured)

PC Caulfield did a brilliant job trying to engage with Mr Ngenda telling him his name and trying to bond with him saying they both had ex-wives, the inquest heard.

He said: ‘You have got me for as long as it takes. You will have a mate for life. If you want a cuddle we will have a ‘man cuddle’.’

When Mr Ngenda, who lived at his parents’ home in Idle, Bradford, told him not to worry, he replied: ‘I do, it’s my job.

‘I might be a daft, gobby, rugby player but I want you to come back in the same way you arrived. You have got a choice. We can go somewhere and talk.’

But despite his best efforts Mr Ngenda fell to his death. A pathologist said he died from multiple injuries and death would have been instantaneous.

In a statement read to the court Dr Ngenda said on August 24 he received a phone call at 8pm from his son saying he was at a police station in Manchester after spending the night there.

‘At 11am on August 25 I received a phone call saying he had been taken into Manchester Hospital and he was waiting to be collected. I drove him home.’

Later on August 26 he said his son seemed fine and in the morning he was lying outstretched on a sofa.

Dr Ngenda said: ‘There was an allegation from a lady about a party he had been to. He had had a lot to drink at the party.

‘He is not normally very talkative but we even had a beer together in the evening. Next day he seemed fine. We left him on the sofa.’

But on August 28 his room was checked and he was not there and his sister’s red Peugeot was missing.

He said his wife was panicking and the police told them he was deceased.

He added: ‘Neither myself or my wife can believe what has happened. We are very shocked and upset.’

The court heard an internal investigation by Det Sgt Deborah Wood of Greater Manchester Police was carried out to see how the Force had conducted itself regarding the rape allegation and the release of the press appeal. She found there was nothing amiss.

She said that after it was published by the local press Mr Ngenda immediately handed himself in to police for questioning.

He had been represented by a solicitor and had been seen by the custody officer before being discharged and bailed until September 11.

Mr Fleming said: ‘He was properly risk-assessed and driven back to his home address.

‘There was an incident the next day and he was taken in by police. He seemed a little bit under the weather.’

He said there had been a ‘worrying exchange of text messages’ between Mr Ngenda and two friends just before his death which made clear ‘his intention to end his life.

‘It’s clear that the criminal allegation against him was weighing very heavily on his mind.’

He said that in addition the breakdown of his marriage and separation from his children had not helped.

He added: ‘It’s clear that these developments were the catalyst to put him in a very dark place indeed.

He concluded the text messages and notes he left behind were indicative of his intention ‘that he intended to take his own life.’

For confidential support call the Samaritans on 116123 or visit a local Samaritans branch, see www.samaritans.org for details