Washington: US national security may be jeopardised if FBI Director Christopher Wray is abruptly removed after the presidential election, an association representing more than 14,000 current and retired special agents wrote in letters to President Donald Trump and his Democratic opponent Joe Biden.

Wray should be allowed to finish his 10-year term, which will expire in 2027, the FBI Agents Association wrote in the letters sent on Wednesday. 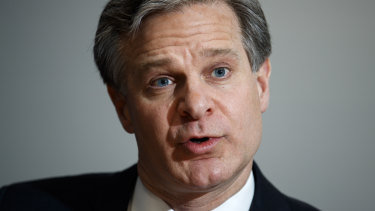 "This country needs stability in leadership of the Bureau during these challenging times, and creating upheavals at the Bureau after the elections can only undermine the goal of protecting the safety and security of our country," the association said.

Trump, who picked Wray after firing FBI Director James Comey in 2017, has repeatedly refused to rule out firing him too.

Wray has angered and frustrated Trump in recent weeks by refusing to back up the president's unsupported allegation that the use of mail-in ballots will lead to massive election fraud. He's also departed from Trump's stance by saying that members of right-wing groups are more of a domestic terrorism threat than left-leaning anarchists or the Black Lives Matter movement.

Wray also has bucked Trump by citing US intelligence that Russia is actively working to undermine Biden’s chances of being elected, and thereby helping Trump.

Trump also has called for the Justice Department to announce an investigation into Biden and his son, Hunter. But Wray has kept the FBI silent, sticking to a tradition of not doing anything before an election that could impact the vote.

Although an FBI director's term is written into law, a president can fire the director at any time for any reason.

In September, former Vice President Biden said that Wray was under attack by Trump even though "he has laid out and told the exact truth." But Biden told reporters he didn't know Wray and wasn't going to commit to "keeping anybody or getting rid of anybody."

The letter from the agents' association also sent a message that Wray has widespread support from the rank and file in the Federal Bureau of Investigation. Trump and his surrogates asserted that Comey wasn't supported by FBI agents when he was fired.

"Director Wray operates independently from partisan activities," the association said. "He has not led the Bureau in a political manner, and politics should not determine his fate as Director."