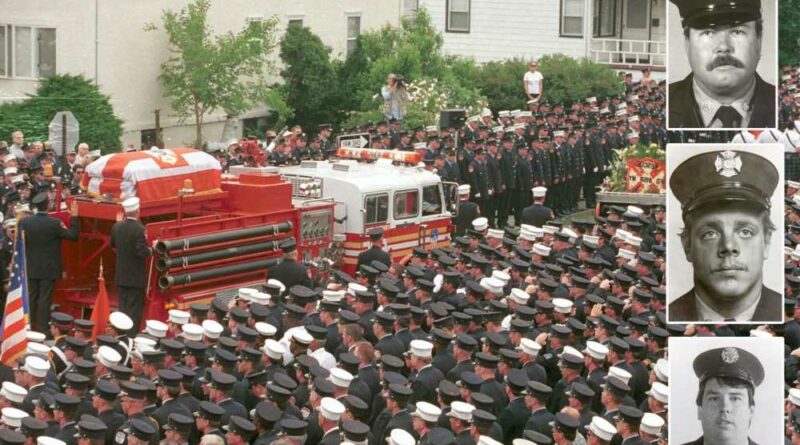 More than 100 passengers evacuated after ferry runs aground in NYC

It’s been 20 years since the Father’s Day fire that ripped apart the lives of Mary Fahey, Denise Ford and Ann Downing.

The three women were never the same after June 17, 2001, when their firefighter husbands died during a massive blaze at a Queens hardware store, leaving their children without dads.

Out of that unspeakable horror, the FDNY widows, Bravest in their own right, forged a bond that held them through the next two decades — and on Thursday, they will gather to mark the somber anniversary.

“It’s absolutely through tragedy that I gained these beautiful sisters,” Ann Downing recently told The Post.

“From that day on, they were there for everything.”

The women will attend a morning mass at St. Sebastian Roman Catholic Church in Woodside Thursday, and, before the services, they will return to the site of the inferno in Astoria to lay wreaths for their fallen husbands: Brian Fahey, Harry Ford and John Downing.

The heroes, all veteran firefighters, were among dozens to respond to the five-alarm blaze at Long Island General Supply Co. on Astoria Boulevard. The fire quickly turned deadly when an explosion tore apart the two-story building’s brick walls and roof.

Ford, 50, of Long Beach, L.I., and Downing, 40, of Port Jefferson Station, L.I. were standing outside when the wall crushed them.

Fahey, 46, of East Rockaway, L.I., was inside on the ground level when the floor caved in, and he plunged into the basement. His body was pulled from the mound of rubble several hours later.

A highly-trained firefighter, Fahey had taught his wife that if an FDNY chief ever came to their door, it would be to give her news of his death.

“So, the minute the chief had said, after he knocked on my door, the minute the words ‘I’m Chief’ came out of his mouth, I was like literally imploding inside my brain,” Mary Fahey recalled.

She remembered how her husband had remained trapped in the basement, sending out “Mayday” calls — but couldn’t be saved in time.

“It was traumatic… Absolutely traumatic,” she said. “It was one, one foot in front of the other. Every single day just to survive, and then be strong for your children.”

The couple had 3-year-old twin boys and an 8-year-old son at the time.

The twins were too young to fully grasp the tragedy, but the older boy, “gave out this scream that is indescribable” when he learned his dad had died.

“It was a scream that I just can’t even… like a wounded animal in the forest,” Fahey said.

On that rainy holiday morning, Denise Ford had told her two sons, then aged 10 and 12, to make Father’s Day signs to hang up for when their dad got home. Her stepdaughter was older and in college in Boston at the time.

By chance, her husband had called up from the firehouse and asked to speak to the boys before he responded to the blaze.

“Then, I got the call from the chief,” Ford remembered. “I honestly, sitting in the car driving to the hospital, I was thinking about what I was going to say to (Harry) when I saw him.

“I just couldn’t comprehend that he was gone.”

“When I got home, everybody cleared out of the house and I called my boys in,” Ford continued. “It was the toughest moment of my life, to tell the children that their father was dead.”

Ann Downing and her husband had planned on visiting Ireland, her country of birth, the week after the fire.

“We were going to Ireland the following week, for a vacation. And that was John’s last shift that day … And then we had to go in the helicopter then to Queens,” she recalled.

The couple had a 7-year-old daughter and a toddler son, Michael, who was diagnosed with the childhood cancer neuroblastoma — and died two years after his father.

But her fellow FDNY widows were there to support her through the heartache and grief.

“We’re the best of friends. Honestly, it’s just so beautiful,” she said.

Though their children are now grown, settled and successful in their careers, Father’s Day is never easy.

“I’m always worried about my children,” Fahey said. “And I’ve always tried to make it very special… we usually do church, the cemetery and some sort of remembrance together with family.”

The holiday is “an acknowledgement, and it’s a remembrance. and it’s a reverence,” she continued. “We always tell stories about Brian. You know, ‘Daddy would have done this.’”

Downing said the day is especially hard for her daughter Joann, who was very close to her dad.

“He used to write her wee notes at night to his princess. We still have some of them,” Downing said. “He loved, loved, loved his kids. It’s hard. It’s very hard.”

This year, the women said they are looking forward to marking the day with their FDNY family.

“I still miss him,” she added.

For Fahey, commemorating the anniversary with mass was important, as she explained, “in my Catholic religion, we believe that like when loved ones die they become saints. So it’s a celebration with them included.”

“What’s most important (about Thursday) is just the love and remembrance,” she said.

“That’s what I’m concentrating on: the beauty, and the love, and the peace and the joy that’s going to be with us.”