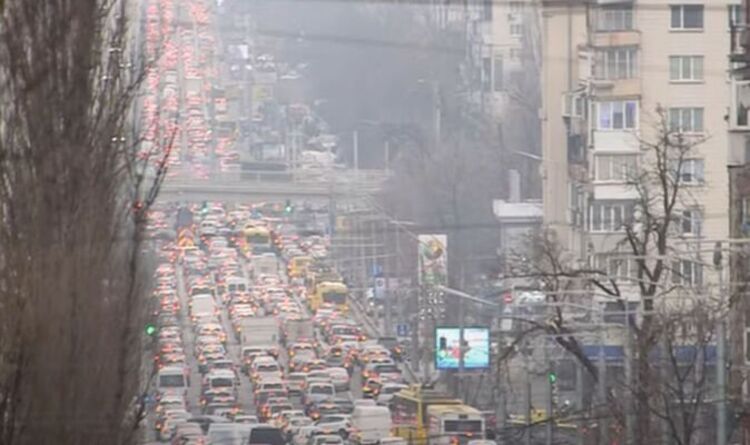 Central European countries condemned Russia’s attack and started preparations to receive potentially hundreds of thousands of people fleeing Ukraine. Russian forces fired missiles at several cities in Ukraine and landed troops on its coast on Thursday, officials and media said, after President Vladimir Putin authorised what he called a special military operation in the east. The Ukrainian capital has been gridlocked due to the thousands trying to leave.

Sky News reporter Alex Rossi said: “This capital city has yet to be attacked from the air but there is gridlock and there is heavy traffic.

“People are trying to flee this city clearly fearing that Russian troops at some stage make their way into the capital.

“It’s not clear the scale of the attack that is underway but we do know it is serious.

“Fear is taking hold of people, they’re trying to get out but at the moment they can’t because it is gridlocked.”

President Putin announced the action during a televised address early on Thursday morning, saying the move was a response to threats from Ukraine.

He said Russia does not have a goal to occupy Ukraine, but the responsibility for bloodshed lies with the Ukrainian “regime”.

Russia’s military said it has targeted Ukrainian air bases and other military assets and has not targeted populated areas.

Mr Putin issued a stark warning to other countries that any attempt to interfere with the Russian action would lead to “consequences they have never seen”.

He accused the US and its allies of ignoring Russia’s demand to prevent Ukraine from joining Nato and offer Moscow security guarantees.

He said the Russian military operation aims to ensure a “demilitarisation” of Ukraine, adding that all Ukrainian servicemen who lay down arms will be able to safely leave the zone of combat.

Explosions could be heard in the Ukrainian capital, Kyiv, shortly after Mr Putin’s address, while blasts were also reported in the cities of Odesa and Kharkiv.

The agency said the Russian troops unleashed an artillery barrage as part of an attack backed by Belarus. They said the Ukrainian border guards were firing back, adding that there was no immediate report of casualties.

UK Defence Secretary Ben Wallace described Russia’s actions as “naked aggression against a democratic country” and said no-one had been fooled by the Kremlin’s “false flags and fake narratives”.

“No-one should forget this day,” he said. “Putin thinks this land grab is about securing his legacy – it will be, but not the one that he wishes.”