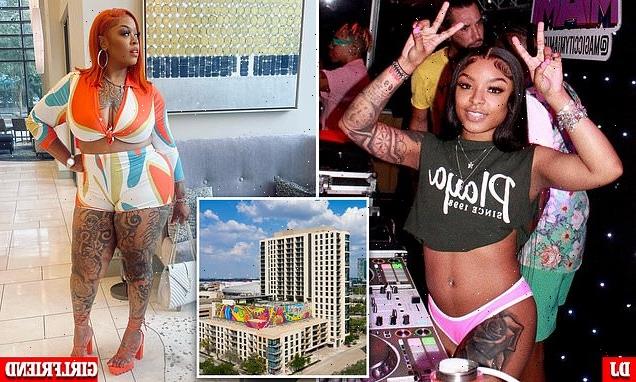 Female DJ, 23, dies after plunging from balcony on 13th floor of a high-rise as girlfriend who was with her claims she ‘was drunk’ and ‘climbed onto a chair and fell’

A popular female DJ in Houston, Texas plummeted to her death in the early hours of July 4. Her girlfriend claims she watched her climb onto a chair on the 13th floor balcony and accidentally fall over the railing.

Darian Lewis, 23, also known as DJ D Baby, died more than a week after being hospitalized from the devastating fall.

Lewis’ girlfriend, Nishia Jackson, was the only other person present on the balcony when Lewis fell, but Jackson claims she had nothing to do with it.

‘There’s no way I could have pushed her over, she was only able to get over because she climbed onto the furniture. I would have literally had to pick her up & throw her over which is absolutely absurd! WE WERE NOT FIGHTING!’ Jackson said in a lengthy Facebook post.

The budding DJ, who had over 27,000 followers on Instagram when she died, had recently celebrated her 23rd birthday.

Her mother, Terri Lewis, took to Facebook to announce the death, saying ‘My youngest and only daughter has transitioned, please pray for the family, my heart is heavy and broken.’

Her death remains under investigation by Houston police. 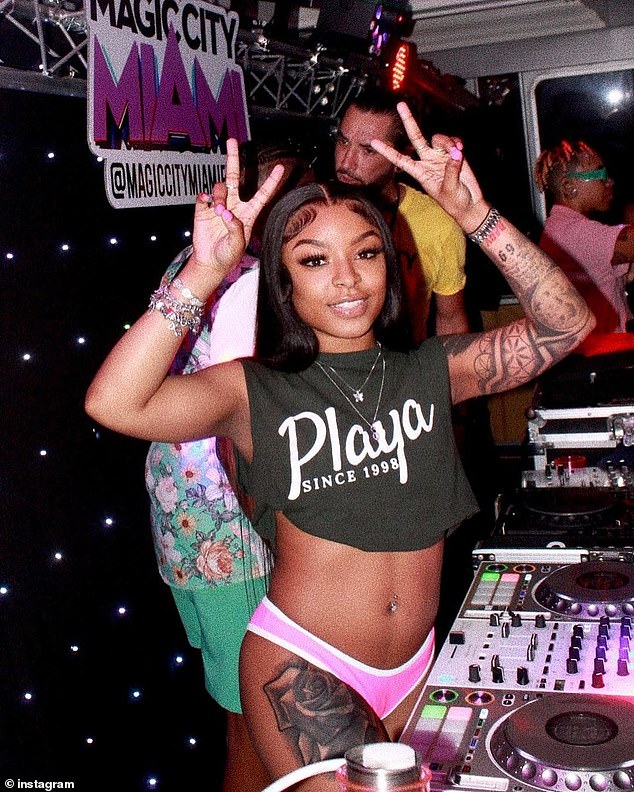 Darrian Lewis, also known as DJ D Baby, fell to her death during the early hours of July 4 while she was at her girlfriends apartment. Her girlfriend says Lewis was drunk and tried to climb a chair before toppling over the railing 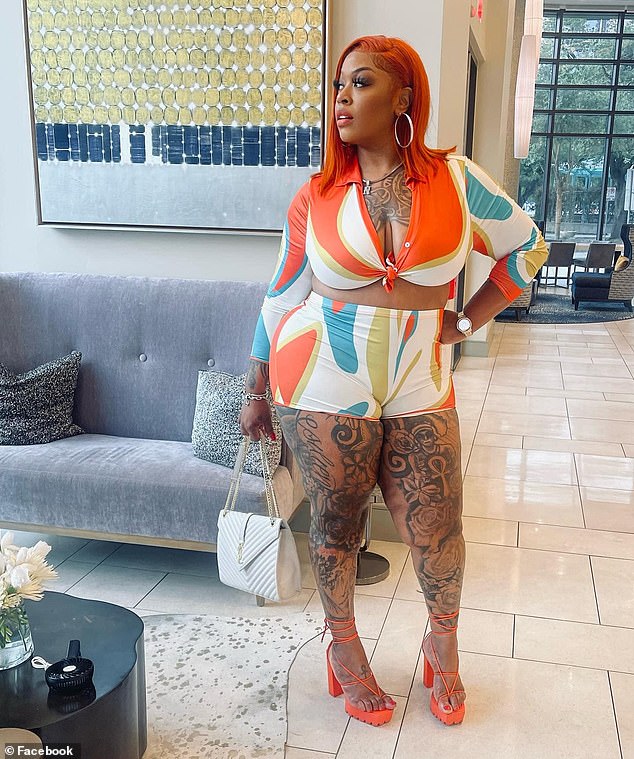 Nishia Jackson, Lewis’ girlfriend, says she saw Lewis fall from the balcony after Jackson barred Lewis from driving home as she was intoxicated. Jackson ran down the stairs to Lewis and called for help 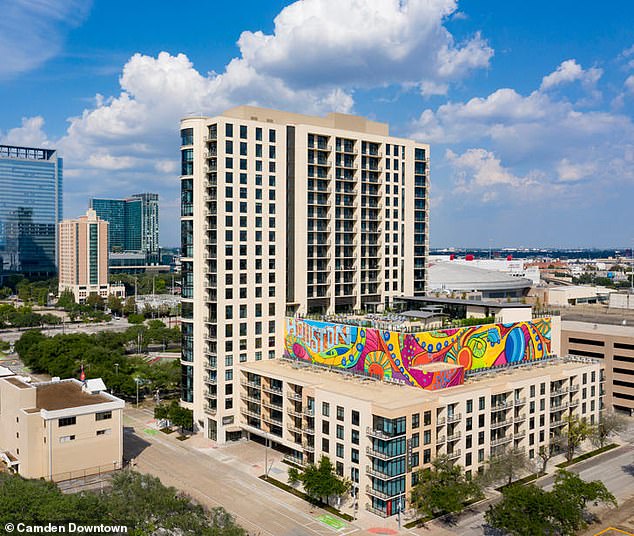 Lewis fell from a 13th floor balcony at Camden apartments on Houston (pictured) around 5 a.m. on July 4th. She landed on the 9th floor pool deck 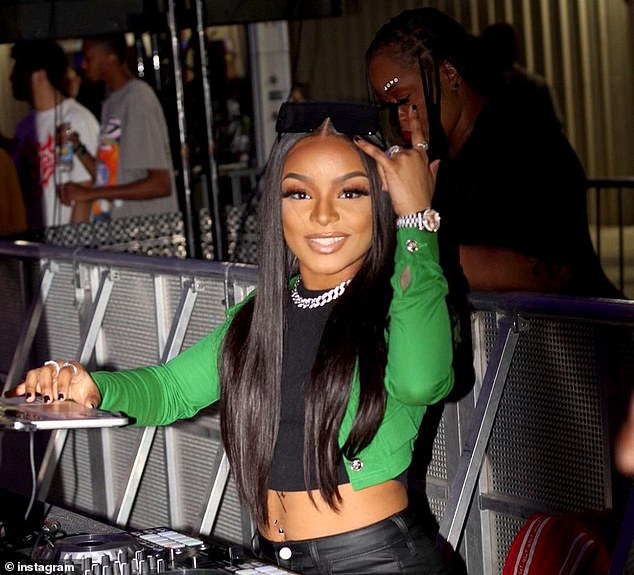 Lewis fell from the balcony on the 13th floor of Houston’s Camden Downtown Apartments onto a pool deck on the 9th floor at approximately 5 a.m. on July 4. The four flight drop later proved fatal.

Prior to her death, Jackson said Lewis was dropped at her apartment by an ‘associate’ as she ‘could not drive’ due to how intoxicated she was.

Jackson said her girlfriend wanted to drive home, but when Jackson barred her from doing so, Lewis ran to the patio and climbed onto a chair where she ‘fell over before I could save her.’

‘I literally saw & heard her fall before my eyes,’ said the distressed Jackson.

She says she then ran down the stairs to Lewis as the ‘elevator took too long,’ and upon reaching her ‘immediately screamed’ and ‘summoned for help.’

Jackson addressed rumors that she purposefully killed her girlfriend, saying those theorizing about the events were ‘cruel’ and ‘unjust.’

‘I’m aware there are a lot of rumors going around & they’re all very disheartening. We were far from perfect. We had issues like most however, I would never hurt her whom I love, nor anyone in such a manner,’ she said.

Jackson also put to bed any rumors that Lewis was trying to hurt herself, saying ‘I’ve also been devastated by the fact that some ppl are now insinuating that she was trying to harm herself, that’s not true either!’

Jackson laid out several explanations for what could have made her girlfriend fall and mentioned she’d never seen Lewis ‘drinking on that level.’

‘Maybe at the moment due to intake, she didn’t realize how high up we were, maybe she just slipped! IDK but the lies are SICK!’ she posted. 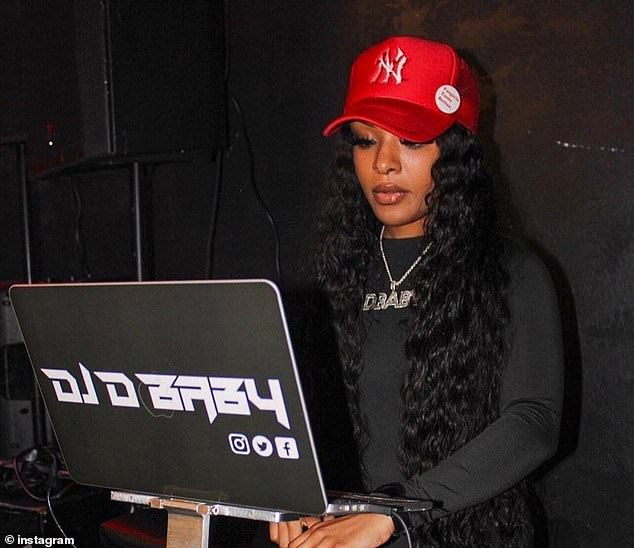 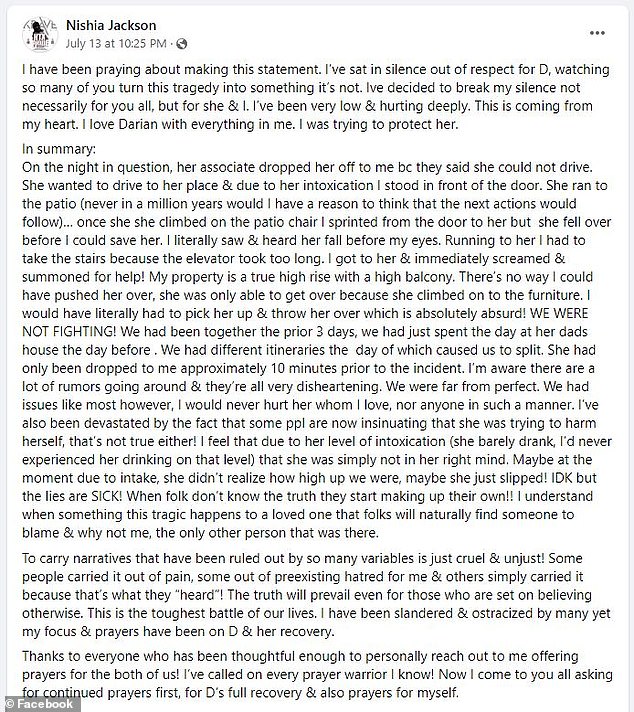 Lewis’ girlfriend, Nishia Jackson, took to Facebook to discuss Lewis’ death and the rumors circulating around it 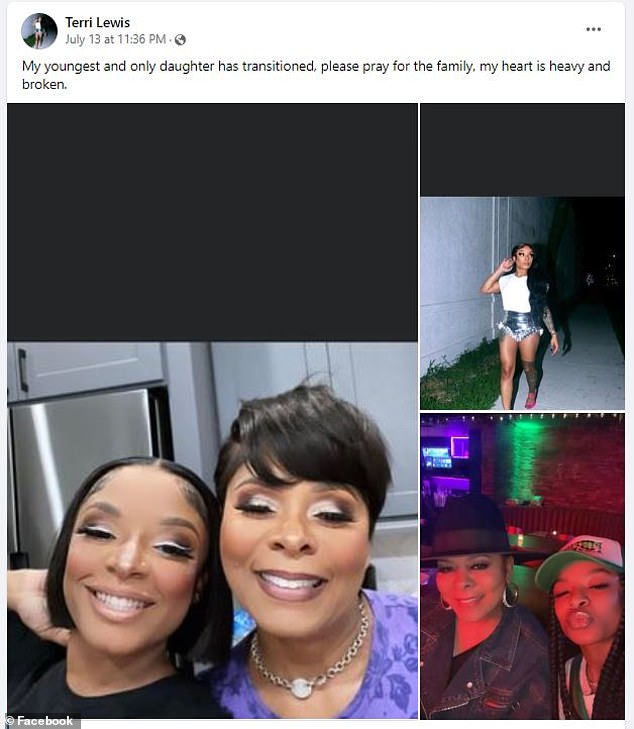 Lewis’ mom, Terri, posted some pictures with her daughter and said her ‘heart is heavy and broken’ about the 23-year-old’s fall

But Jackson says she understands why people may blame her considering she was the only other person there at the time, saying ‘folks will naturally find someone to blame.’

Her father, Darrin Lewis, said his family is ‘going to trust the system, and we’re going to let them do their job,’ in regards to finding out how Lewis fell that night.

‘She did things people that are 56 my age haven’t done,’ said Darrin.

Darrian only started to DJ after she was gifted a DJ set after high school, and quickly adopted the name DJ D Baby before attending Texas Southern University.

‘The crazy part about is at the time, I could barely DJ. I saw going to college as a way to reinvent myself and start a new journey. The rest is history in the making’ she said in an interview.

Lewis called herself ‘the youngest female DJ in Houston,’ and said she was ‘affiliated with some the best media outlets and brands.’

Lewis also spoke about the role her parents played in her becoming a DJ, saying ‘my parents play a huge role in my success, my family that’s forever in my corner.