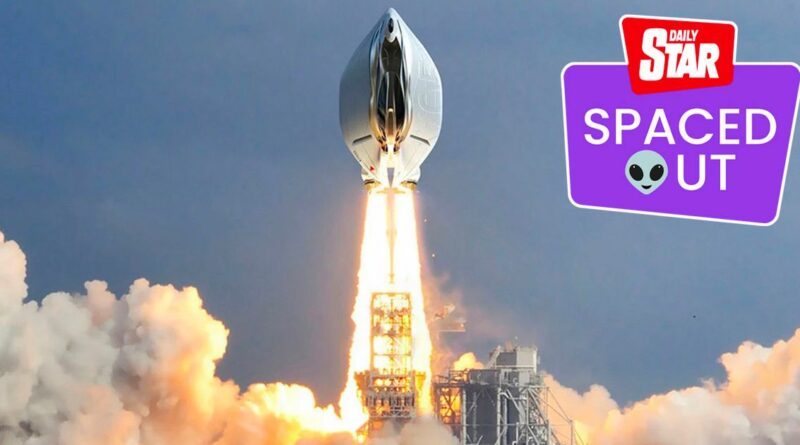 Feminists hope a spaceship that looks like a lady’s bits will make willy-shaped rockets flop.

The “vulva-shaped” machine is part of a campaign to get the European Space Agency to better represent humanity in space.

A German team from Wer Braucht Feminismus? – which translates as Who Needs Feminism? reckon their carbon craft will “restore gender equality to the cosmos”.

Inventor Lucia Hartmann said: “Anyone has a place in the universe, regardless of their genitalia.”

Amazon boss Jeff Bezos has faced ridicule in recent months after he was blasted into space atop a penis-shaped projectile called New Shepard.

People were left in stitches when jokers made fun of the missile’s rude shape.

But rocket rebel Lucia vowed: “We dare to change the status quo in space travel – new shapes in space will revolutionise our thinking, our actions and everything we have thought to be true.

“My team and I are currently working flat out to present the design of the first prototype of the spacecraft to the public. We aim to present the model from March 8.”

The founder of WBF? – artist and activist – has been spearheading the new campaign using the tagline: “It’s time for new symbols in space”.

And she told spaceflight fans: “Space is for everyone!

“With our mission, we prove to the world that gender equality even has a place in space.

“We are not only inspiring space travel, but we’re also rewriting the gender narrative.”

Despite Blue Origin founder Bezos being mocked for his willy-shaped rocket, there is a scientific reason for its design.

Lucy Rogers, the author of It’s ONLY Rocket Science: An Introduction in Plain English, explained it comes down to aerodynamics.

Talking to Inverse, Rogers said: “Think of a jumbo jet without wings and sitting on its tail.

“Arrows, bullets, and fireworks are also generally this shape for the same reasons.”

"The exhaust needs somewhere to go hence the capsule diameter is larger than the booster rocket giving it the characteristic ‘Flesh Gordon’ look," Paul Freeman, a space artifact photographer added.