Chilling CCTV footage has captured the final moments of a British woman who fell to her death from a 10th floor Benidorm balcony during a friend’s hen party.

Kirsty Maxwell is filmed staggering along a corridor in the Payma Apartments in the Spanish resort just hours before she died.

The newly released video shows the friends, each wearing their hen do costumes, make their way to a lift in the building. 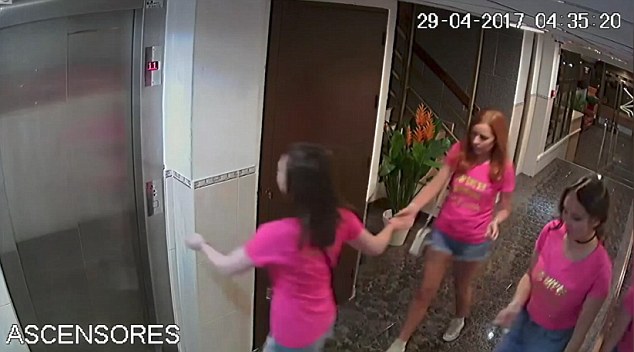 CCTV footage shows Kirsty Maxell (far right) arriving back to the hotel with friends at 5.35am. The time on the clip is incorrect by one hour 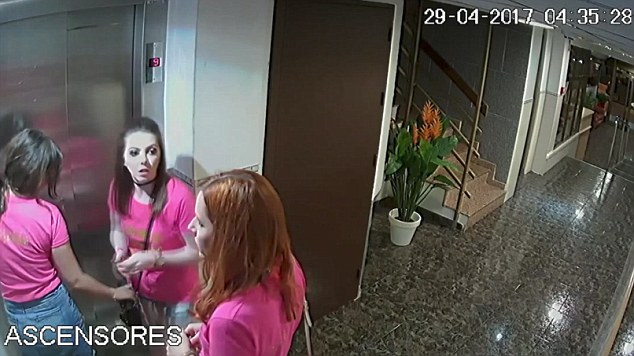 The video then shows the group waiting for a lift. Ms Maxwell is on the left 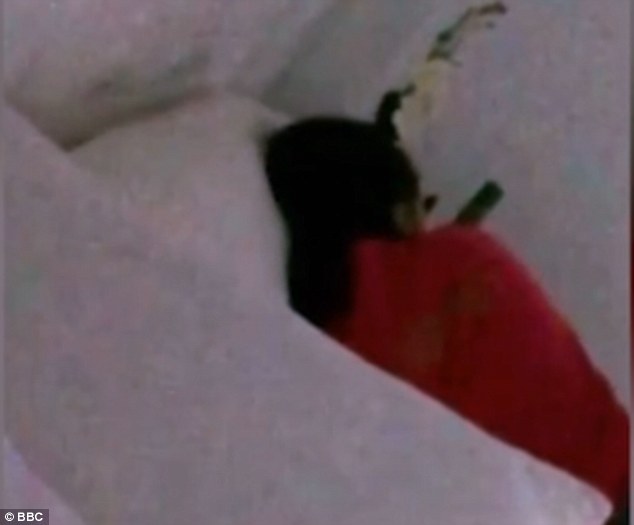 Mrs Maxwell is filmed asleep in her hotel room at 6.50am. An hour later she falls to her death

The group had returned to the apartments at 5.35am – the time stamp on CCTV was one hour out.

She then went to sleep, and was filmed snoring at 6.50am

An hour later, at 07:51am, Mrs Maxwell fell to her death from the balcony of apartment 10E, on the tenth floor, which was occupied by five men from Nottingham.

The men, dubbed the Benidorm Five, were all quizzed by police but were allowed to return to the UK. 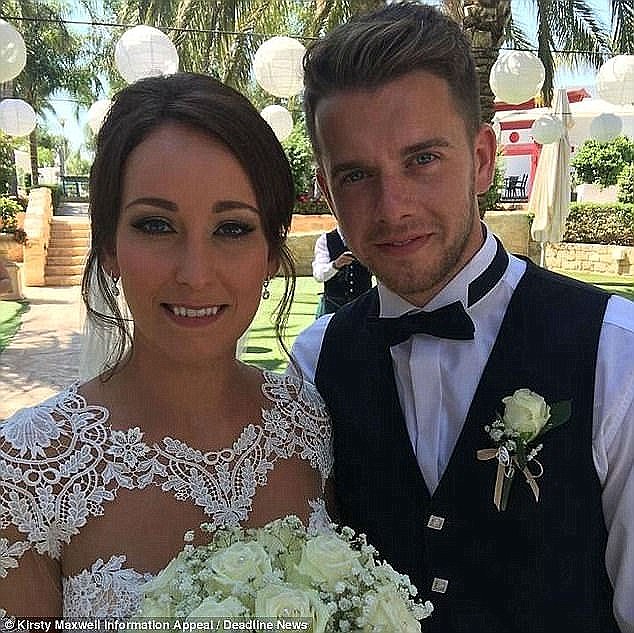 Kirsty Maxwell, 27 (pictured with her husband of six months Adam) from West Lothian in Scotland, was on a friend’s hen party in the Spanish resort of Benidorm on April 29 last year when she died 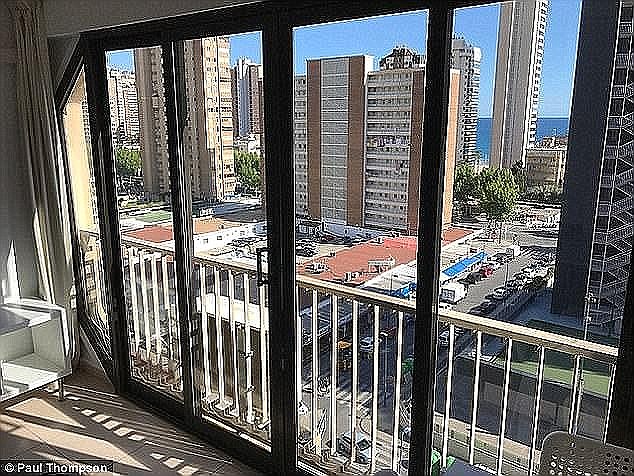 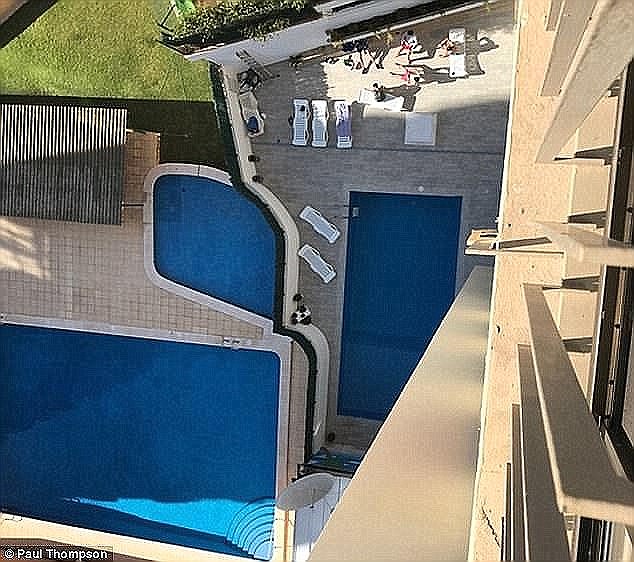 They deny any wrongdoing and police are still investigating the bank worker’s death. 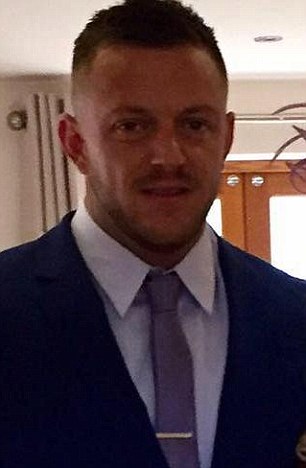 The CCTV footage has featured in a new BBC documentary Killed Abroad, which aired in Scotland this week.

Her widower Adam, 28, who married Ms Maxwell just seven months earlier, said: ‘We made a promise as a family that we would leave no stone unturned for Kirsty.

‘This was my Kirsty. The circumstances surrounding it were impossible to believe.

‘It was just me and the rest of the family doing the investigation as such, which was hugely difficult.

‘At the same time we were organising Kirsty’s funeral, I was organising second autopsies to be done.

Tests have confirmed that Ms Maxwell was more than three times the drink-drive limit when she died, but had not taken any drugs.

Her family have also blasted any suggestion that she jumped. 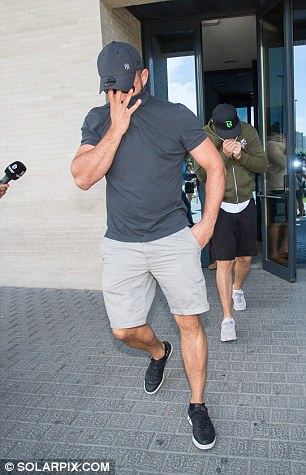 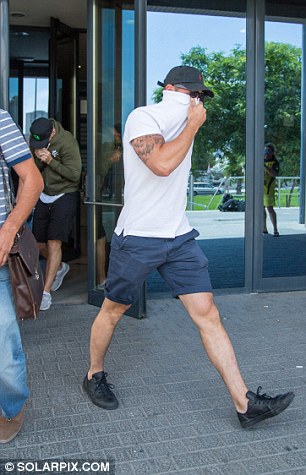 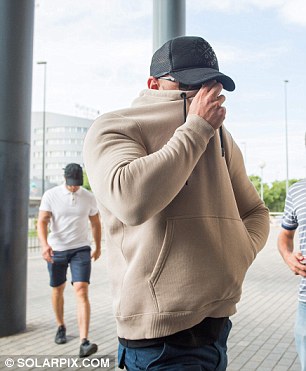 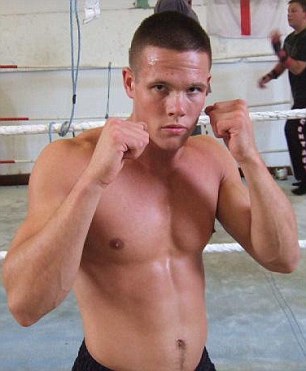 Another of the five men is pictured covering his face as he left court left, along with Ricky Gammon, right 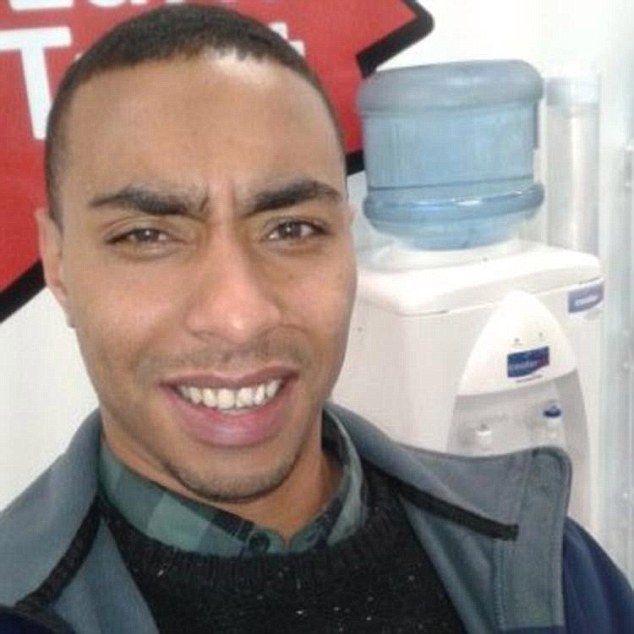 Her brother Ryan Curry told the documentary: ‘She was at the happiest point in her life, and so was everyone else.

‘Really content with life at that time, and it just changed overnight.’

Joseph Graham, Callum Northridge, Ricky Gammon, Anthony Holehouse and Daniel Bailey were part of a group of 50 men on holiday together at the time of Mrs Maxwell’s death.

In a previous statement, four of the men branded the incident a ‘tragic accident’ and argued their names had been ‘dragged through the mud’.