The high, dry, sunny Castilian plain in north-central Spain has been home to grape-growing and winemaking for eons. Yet the output from the region, now known worldwide as Ribera del Duero, is paradoxically one of the most modern expressions of Spanish wine.

The pace of evolution was swift as Spain emerged from years of dictatorship to join the European economy in the last quarter of the 20th century. Local wine customs that had been in place for centuries were discarded. New styles emerged.

In Ribera del Duero, the people traditionally drank clarete, a pink wine made by blending white and red grapes. A high percentage of those red grapes were tempranillo, or tinto fino, as it is known there. Other grapes were used as well, including garnacha and bobal among the reds and albillo among the whites.

But clarete has largely faded away, though a few stalwart producers are maintaining the tradition. In its place came powerful red wines dominated by tinto fino, aged in barrels of new French oak, which offered the plush, extravagantly fruity, oaky cocktail wines that became popular in the 1990s. 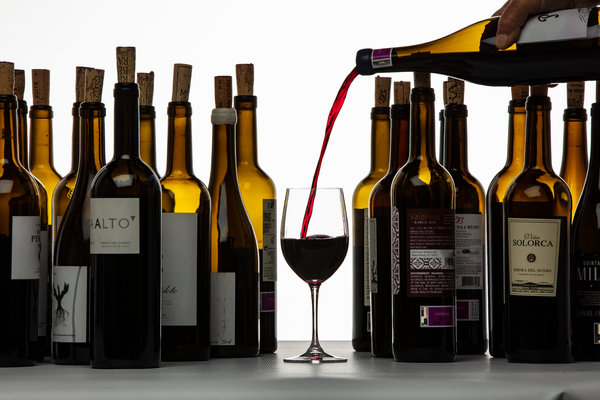 These wines are the modern face of Ribera del Duero. The wines received high praise from critics and found favor in the United States, where they often received top scores for their inky potency.

If Rioja to the northeast, which also makes tempranillo-based reds, drew its inspiration from Bordeaux, Ribera del Duero, it was said, was more a Spanish version of the Napa Valley.

It was a convenient formulation. But much has changed in wine in the last decade. Regions that were known for extracting as much ripeness, power and fruitiness as possible in making their red wines were pulling back in the direction of harmony. It has happened all over California, even in Napa Valley.

What about Ribera del Duero? As one who prizes the qualities of restraint, balance and refreshing acidity, which were in short supply in Ribera del Duero, I have not often gravitated toward the region’s wines. Yet I could not help but wonder whether this region, which had achieved such success with this particular style, had also evolved away from power toward more graceful, tense wines.

In pursuit of an answer, the wine panel recently tasted 20 bottles from Ribera del Duero. Seven were from the 2015 vintage, 12 from 2016 and one from 2017. For the tasting, Florence and I were joined by two guests, Mariarosa Tartaglione, a sommelier at Marea, on Central Park South, and Gabriela Davogustto, wine director at Clay, in Harlem.

Before the tasting, we debated briefly how to judge the wines. Was there such a thing as a typical wine from Ribera del Duero? Were we looking for wines that fit those characteristics, whatever they were?

My answers were no, and no. Ribera del Duero is a modern creation. The appellation did not even become official until 1982, more than a century after the region’s flagship winemaker, Vega Sicilia, got its start.

Vega Sicilia is one of the world’s great producers. Its top wine, Único, a gorgeous blend of intensity and subtlety, costs hundreds of dollars and can evolve for decades. Yet Vega Sicilia has never really served as a stylistic role model for the rest of the region. Many of the region’s winemakers looked for inspiration outside Ribera del Duero and outside the country. They found it in the modern, internationally popular model of powerful, oaky reds.

These wines did not represent the slow evolution of a region’s character over generations, but rather were the products of conscious choices by their producers that coalesced into a dominant style. Ribera del Duero excels at producing wines in this mode, though the wines are more a product of international tastes than of regional traits.

For me, harmony and balance are universal qualities that I want to see in fine wines, regardless of their styles. Ribera del Duero is typically hot and dry in summers, and so I would expect wines of ripe, muscular fruit flavors — sunnier versions of Rioja, so to speak.

But, at high altitude, 2,500 feet above sea level, Ribera del Duero experiences big temperature swings between day and night. And many of the vineyards are on limestone. Theoretically, at least, this combination of altitude and soil can help to preserve acidity in the grapes, allowing the region to make wines that match ripeness with freshness, which gives them tension.

We agreed that our cross section of 20 bottles offered much more stylistic diversity than we might have found a decade ago. Yes, we encountered jammy fruit and too much oak in some of the wines. But we also found much more freshness than we expected, with more acidity and balance.

“Some are big and powerful — that is Ribera,” Gabriela said. “But they can be balanced.”

The best had spicy fruit flavors rather than the sweetness that might come from overripe grapes, and a sort of earthiness that one might infer was typical of warm-climate tempranillo.

Issues of balance mostly revolved around oakiness. We rejected several bottles, including some of the more expensive ones in the tasting, because they were so overpoweringly oaky. While oak barrels and tempranillo are a tried-and-true combination, the flavors did not seem as if they would ever integrate in these bottles. As usual, we had a $100-a-bottle ceiling, so some of the most famous names like Vega Sicilia and Pingus were not in our tasting.

Our No. 1 bottle was the 2016 from Emilio Moro, one of the grand old names of the region. This wine was intense and polished in the modern style, yet complex and balanced, with earthy, expressive flavors. No. 2 was the 2015 Los Cantos from Finca Torremilanos, pure and harmonious, with flavors of flowers and dark fruits. As was true with many of the more tannic wines in the tasting, it will benefit from a few more years of aging.

At $17, the Finca Torremilanos was our best value, though many wines could have filled that role, including our No. 3 bottle, the firm yet fresh 2016 Viña Solorca Barrica at $15, and our No. 7 bottle, the spicy 2016 Torremorón at just $13.

At No. 4 was an outlier, the 2017 Joven de Viñas Viejas from Goyo García, a wine made naturally, with minimal intervention, from old vines. If I were to choose one of these bottles to drink tonight, I would pick this juicy, pure, spicy and refreshing wine.

In the fifth spot was the 2016 Mibal Joven from Hornillos Ballesteros, concentrated and rich, yet balanced and earthy, while No. 6 was the firm, resonant 2015 from Dominio del Soto.

Also worth noting were the clear, pleasantly rustic 2015 Finca Villacreces, the heady and tannic 2016 Antidoto and the energetic yet oaky 2016 Roble from Valdrinal.

Perhaps one reason we were impressed by our top 10 was that they were from the cheaper end of the spectrum, where long aging in barrels of new oak is often considered too costly. The three most expensive bottles in the tasting, all over $50, were rejected as either too oaky, too sweet tasting or simply too too.

Nonetheless, we all took it as a good sign that we could find so many wines to like. It was an indication that the wines of Ribera del Duero are heading in a more exciting direction.

Pure and harmonious, with firm tannins and fresh aromas and flavors of flowers and dark fruits. (Skurnik Wines)

Tannic yet balanced, with flavors of red and dark fruits and a not unpleasant earthy, metallic tang. (Olé Imports, New Rochelle, N.Y.)

Quite tannic, with bold heady flavors of spicy dark fruit and notes of oak. (The Rare Wine Company, Brisbane, Calif.)

Wintry weather and holiday parties call for celebratory food to share. In Ribera del Duero, the Spanish countryside north of Madrid, the weather can easily take on an Alpine chill. Game is popular there, so instead of the more typical beef, lamb, pork or poultry roasts, I opted for venison for this pairing recipe. The wines offered spice and fruit. I picked up on the spice with cumin and pepper for the venison and its sauce. But I avoided the usual tart-fruit component so the spices would have less competition, and I seared some shallots to go alongside. For venison, the rack is the easiest cut to prepare, and in a hot oven, it is quickly done. The meat is hearty and succulent, with just the faintest hint of gaminess. Be sure to cook it only to medium-rare or it will toughen. Unless you know a hunter, you’ll need to buy ranch-raised American or New Zealand venison. It can carry a hefty price tag, and you do not want to be disappointed. FLORENCE FABRICANT