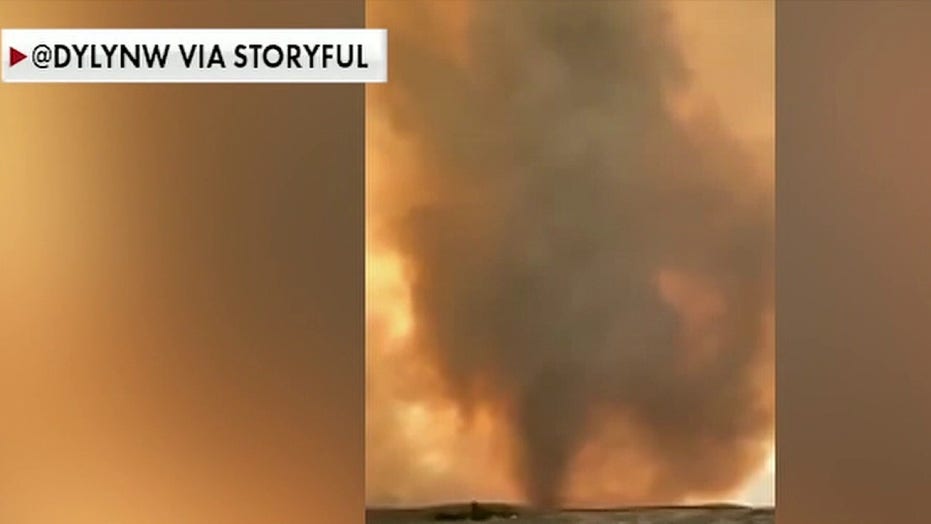 Firenado rips through parts of California, firefighters struggle to remove cars from a highway

Rare weather phenomenon strikes with winds as high as 60 miles per hour.

An explosive wildfire burning in Northern California whipped up a rare and dangerous fire tornado on Saturday, triggering a dire warning from forecasters.

The Loyalton Fire has burned some 20,000 acres north of Lake Tahoe since igniting Friday afternoon and is only 5% contained, according to Tahoe National Forest.

Mandatory evacuations are in place for portions of Plumas, Lassen, and Sierra Counties as the blaze is burning east of the town of Loyalton and southwest of Mount Ina Coolbrith.

On Saturday afternoon, the National Weather Service (NWS) office in Reno warned that the blaze had "extremely dangerous fire behavior," with the potential for rotating columns and  fire whirls, otherwise known as fire tornadoes or a "firenado." 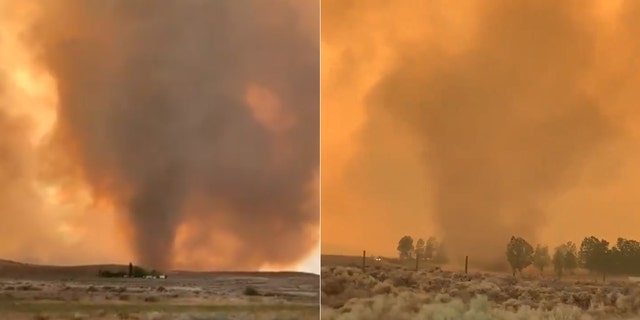 The National Weather Service issued a rare fire tornado – or “firenado” – warning for a fire whirl whipped up by the Loyalton Fire, which is burning near the California border outside Reno on Saturday.
(@DylynW via Storyful)

About 20 minutes after, forecasters warned responders to beware of a rare fire tornado near Roberts Canyon.

"Heed all orders by emergency managers and responding personnel," the forecast office tweeted. "Stay away from the fire area!"

Videos and photos showed a funnel forming in a plume of wildfire smoke near the U.S. 395 highway.

Fire tornados, also known as fire vortices, are not tornadoes in the true sense. They occur when a gust of extremely hot air blows through the fire at a certain angle, producing a spinning momentum which then sucks up embers and debris.

Weather service officials said Saturday that the Loyalton Fire was showing extreme behavior, such as gusty winds and blowing smoke, similar to a deadly Northern California fire that destroyed more than 1,000 homes and killed 8 people

In 2018, the massive Carr Fire in California produced a vortex with winds clocked at 143 mph by the National Weather Service (NWS), a wind speed equivalent to an EF-3 tornado on the Fujita scale.

"Firenadoes are an extreme weather phenomenon that can occur with rotating fire columns," the NWS Reno tweeted. "As extreme as this behavior is, the #CarrFire had an extreme example of this."

It may have been the first time the NWS has issued a tornado warning, according to the San Francisco Chronicle.

“We really don’t have any other product for that type of situation,” NWS meteorologist Wendell Hohmann told the paper. “We decided to put a tornado warning out on it and emphasize the significance.”

According to the NWS, a pyrocumulus cloud forms if there is enough moisture and atmospheric instability over the "intense heat source."

The explosive storms can form during a fire when heat and moisture from the plants are released, even when the fuel is relatively dry. Similar conditions were seen during devastating wildfires earlier this year in Australia and another blaze in Northern California.

The blaze later jumped Highway 398, forcing firefighters to provide protection as drivers moved their vehicles to avoid the fire.

Video captured by the Truckee Meadows Fire and Rescue shows the incident. The fire department said vehicles were “stuck on the road.”

“The crew provided protection and got the vehicles out of harms way,” the agency wrote on Twitter.

Record-breaking heat with triple-digit temperatures and low humidity this week across California have left firefighters busy trying to contain blazes across the state.

A red flag warning was issued for the San Francisco Bay Area and other parts of Central California through Sunday morning due to critical fire conditions.

A huge forest fire that prompted evacuations north of Los Angeles, the Lake Fire, is now 12% contained after burning some 17,862 acres and flaring up on Saturday afternoon. 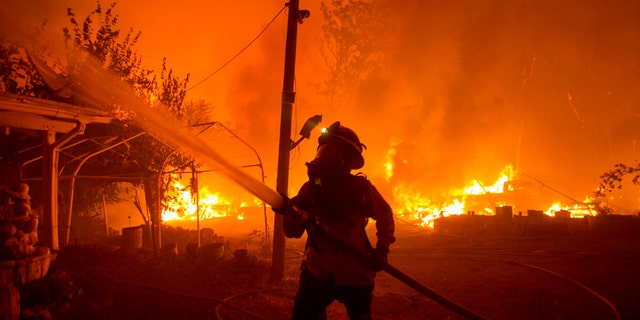 Although it was burning into forest land, evacuation orders remained in effect for the western Antelope Valley because erratic winds in the forecast could push the fire toward homes, according to fire officials.

There was also no containment of a blaze that blackened foothills above the Los Angeles suburb of Azusa that is believed to have been sparked by a homeless man. It churned through 2.3 square miles of brush on Thursday and was moving away from homes. 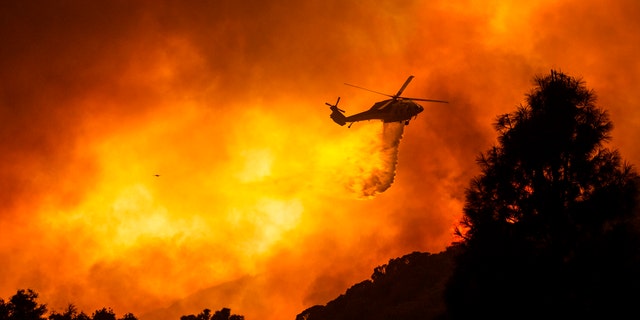 Another blaze came dangerously close to a neighborhood in the city of Corona, east of Los Angeles, before crews controlled it. And a Northern California fire in the community of Sloughhouse, near Sacramento, burned about 500 acres before firefighters stopped its forward spread.