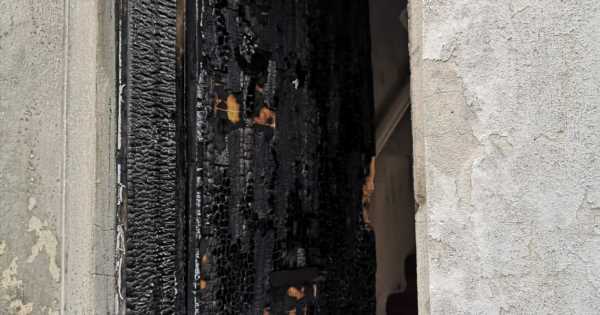 Two young brothers were trapped inside their home alongside their dad after an alleged arson attack left the only exit engulfed in flames.

Sick arsonists allegedly stacked wooden items like fencing and crates against the door of the flat before setting it alight, risking the lives of the occupants.

Danyl, 11, and Oliver Leske, 9, who had to hang from the window to breath fresh air, were safely removed from the flat by firefighters who had been responding to another fire nearby, at 4.45am on Saturday September 4 in Auchinleck, East Ayrshire, Scotland.

They had been staying with their dad who had to be taken to hospital due to smoke inhalation.

Their mother, Joanne Morgan, the father's ex wife, said that she was informed about the incident by two firemen who came to her door with her kids afterwards.

Both of them are now sleeping in the same room, and have planned an escape route from their own home in case it happens again.

Joanne, 33, told the Daily Record: "I got a rattle at the door just after 5am in the morning, and there were two firemen there and they told me my ex-husband was in the back of an ambulance.

"They said that someone had put like wooden fence panels and stuff against the door and set it alight, and it is the only way in and out of the house.

"My kids were very shaken by the whole ordeal, when I first heard about what happened I just could not believe it, I think I'm still in shock, I don't think it has fully sunk in yet.

"They've not really spoken much about it to be honest, they've been sleeping in the same room together since it happened even though they have separate rooms.

"When they came back home that night, they planned an escape route just in case it happened again, no weans should ever have to think how am I going to get out of here if something happens, it's just awful.

"I was just in a state of shock when it happened, it was just a random attack that could have been much worse for my family."

The property has been damaged by the blaze, with many of the household items needing removed due to smoke damage. Joanne has started a fundraising campaign to help rebuild her ex-partner's flat.

Police are investigating the cause of the fire.

Detective Sergeant Sarah Holland said: "I am appealing for anyone who was in the area at the time and saw anything suspicious to get in touch."