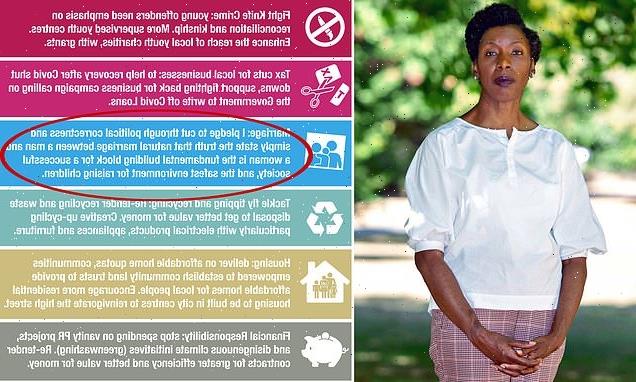 Fired… because she dared to advocate marriage between a man and a woman: When Maureen Martin stood for election as a London borough mayor she thought voters should know her views on family values. The result was chilling – and depressingly familiar

A woman campaigning to become a mayor in London was fired from her job because she told voters in an election leaflet that she believed in marriage between men and women.

Maureen Martin was accused of gross misconduct and sacked after the housing association where she worked claimed her campaign pledge to promote ‘natural marriage’ was ‘discriminatory’ and would offend gay and trans people.

Bosses at London & Quadrant Housing Trust (L&Q), one of the largest housing associations in England, took the astonishing step after Ms Martin was targeted by a Twitter mob who accused her of ‘hate speech’ during this year’s local elections.

But in an interview with The Mail on Sunday, Ms Martin last night accused L&Q of undermining democracy by putting her through a ‘Soviet-style interrogation’ just a fortnight before polling day.

‘I was devastated. We either have freedom of speech in the UK or we do not,’ she said. ‘We must have the freedom to disagree with each other without it resulting in people having their lives torn apart.’

The disturbing case – believed to be the first of its kind – began in April when Ms Martin, 56, a candidate for the Christian Peoples Alliance in the contest to become mayor of Lewisham in South-East London, published a leaflet that was posted to the borough’s 205,000 registered voters.

It promoted a ‘six point plan’ and included promises to tackle fly-tipping, boost recycling rates and target knife crime. The third point, however, proved incendiary for a small group of LGBTQ+ people. 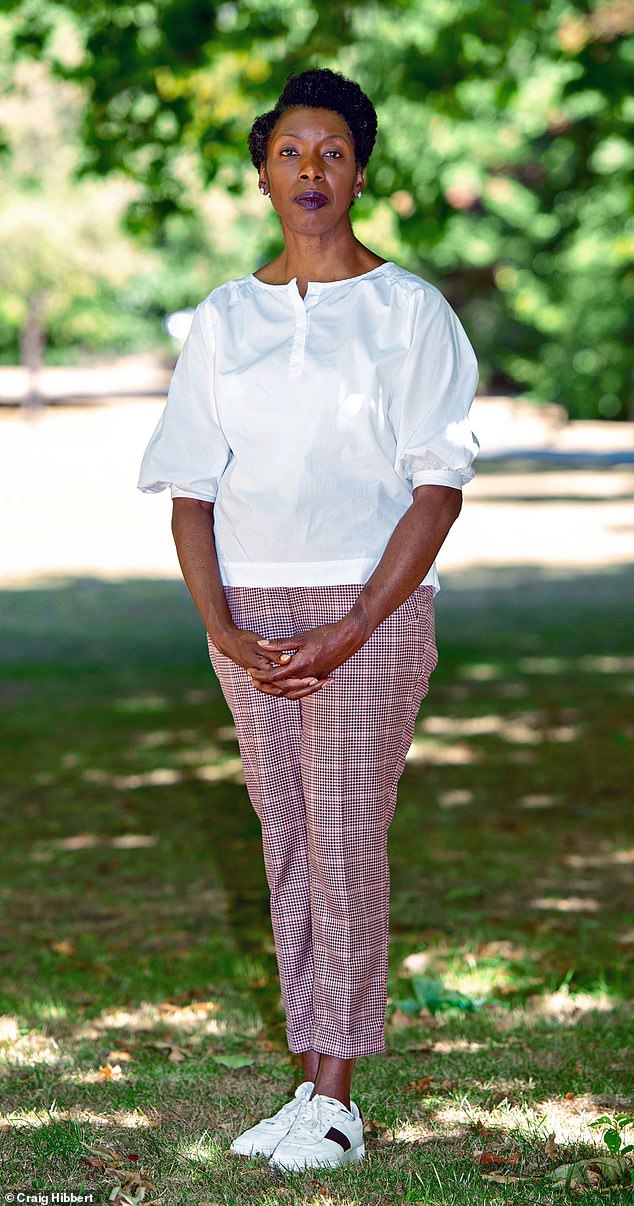 Maureen Martin, pictured who was campaigning to become a mayor in London was fired from her job because she told voters in an election leaflet that she believed in marriage between men and women

In it, Ms Martin vowed to ‘cut through political correctness and state the truth that natural marriage between a man and a woman is the fundamental building block for a successful society, and the safest environment for raising children’. The wording was taken almost exactly from the CPA’s election manifesto.

Two days later, L&Q – where Ms Martin worked as a housing manager – summoned her to an ‘investigation meeting’, saying it had received three complaints. Two were believed to be from the housing association’s tenants and a third from a colleague of Ms Martin.

One of the anonymous complainants called for Ms Martin, who had worked for L&Q for 13 years and had an exemplary record, to undergo ‘anti-oppressive training’ and ‘for disciplinary action to be taken to address her statements’.

Despite no mention of her employer’s name in the leaflet, Graham Swanton, a senior L&Q manager who investigated the complaints, argued Ms Martin could ‘be easily linked with L&Q’ because the photo used on the pamphlet also featured on her Facebook page, which stated that she worked at L&Q.

Minutes of the meeting, obtained by the MoS, reveal Mr Swanton asked Ms Martin to explain her views on same-sex marriage and quizzed her on whether she still intended to run for mayor.

Despite having told L&Q that she was the president of the CPA, she was accused of failing to inform bosses she was running for office.

‘I completely agree that your views are your views,’ Mr Swanton said. ‘However to air them so publicly when you’re clearly linked to L&Q, can you see how that could bring L&Q into disrepute?’

As Ms Martin was questioned, it became clear her bosses had trawled her Twitter account in a search for further comments.

She was challenged about one tweet in which she had commented on transgender sport and another in which she retweeted a comment by the CPA that it was ‘disgusting’ for the US embassy at the Vatican to display the rainbow LGBTQ+ flag. Ms Martin said she was clearly not referring to the movement.

Ms Martin last night said she was ‘shocked’ at the ‘brutal’ interrogation, adding: ‘I thought to myself, “There’s no way they could fire me over this, surely?” I had determined already that I was not going to back down from my Christian values. I will defend them.’

Her belief that children are better brought up by heterosexual, married parents did not impact her work with tenants, she said.

‘I would not treat people in any way other than professionally. It was a general statement I made and I am quite within my right to make it,’ she said.

‘If we don’t have it in this country, we are in big trouble. Are we going to turn into a totalitarian country? Are we a free country, or aren’t we? We have to make our minds up.’

Ms Martin was suspended and then, following a disciplinary meeting on May 6, sacked. A letter from L&Q claimed she had expressed her views in ‘an inappropriate manner’ and it was ‘reasonable to conclude that they will have caused upset, hurt and offence’.

The dismissal has left Ms Martin, who lives with and financially supports her 87-year-old father, without an income.

She claims the disciplinary process thwarted her election campaign and that Mr Swanton’s question about whether she still intended to stand as mayor was an attempt to pressure her into withdrawing.

‘It was quite difficult to campaign because I had this thing hanging over my head. It was a massive distraction and significantly impacted my campaign,’ she said.

‘I don’t do anger but I do want justice. Not just for me but for anyone coming after me who has to face the same punishment,’ she said.

‘The message this is sending is if you want to engage politically and make a difference in your community, but if your views don’t line up with the liberal agenda, you can potentially be fired from your job.’ 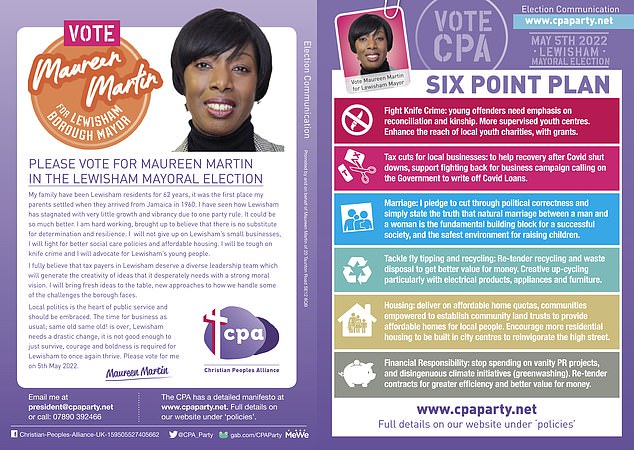 Ms Martin vowed to ‘cut through political correctness and state the truth that natural marriage between a man and a woman is the fundamental building block for a successful society, and the safest environment for raising children’

Andrea Williams, chief executive of the Christian Legal Centre, which is helping Ms Martin, said that the sacking was ‘an attack on our democracy’.

‘Would an L&Q staff member campaigning for LGBTQ+ rights in a local election have been treated in such a way?’ she added.

Fiona Fletcher-Smith, Chief Executive of L&Q, said: ‘While we respect that individuals’ freedom to hold particular religious or other beliefs is absolute, we do not tolerate it when these beliefs are manifested in a way that is derogatory or offensive to others.

‘Several of our residents raised complaints with us after reading the leaflet.

‘This matter was robustly investigated in accordance with L&Q’s policies and procedures, and in line with equalities legislation, and the appropriate action taken.’

I don’t agree with Maureen… but I’d die in a ditch to defend her right to say what she thinks, writes TOBY YOUNG

As the head of the Free Speech Union (FSU), I’m often told by members of the woke Left that cancel culture isn’t real. According to them, it’s only a figment of the imagination of Right-wing culture warriors.

People like me aren’t really concerned about free speech, they say. We’re just disappointed that male, pale and stale Conservatives aren’t on the telly as often as we used to be.

Well, try telling all that to Maureen Martin.

Maureen is neither male, pale nor stale. Yet she was fired from her job at a South London housing association because she said things about marriage that some people judged politically incorrect.

As it happens, she was expressing her views as part of a public, democratic debate – which you might have hoped would bring her additional protection. But Maureen was sacked all the same.

‘Natural marriage between a man and a woman is the fundamental building block for a successful society, and the safest environment for raising children,’ she wrote in an election leaflet when she was running to become Mayor of Lewisham.

And that simple expression of Maureen’s orthodox Christian beliefs was enough – seized on by local LGBT activists as an opportunity to cancel her. They reproduced an image of her leaflet on Twitter and accused her of ‘hate speech’ and breaking the law.

This sparked complaints to her employer – L&Q – with demands that she be dismissed, calling her a ‘bigoted moron’. And the company duly obliged. Notwithstanding the fact that she’d worked for them for 13 years and had an unblemished record, Maureen was sacked for breaching the company’s social-media policy and bringing L&Q into disrepute.

At the FSU, we encounter this excuse over and over again. Last year, we helped a man called Jeremy Sleath who’d been fired by West Midlands Trains for celebrating the reopening of the pubs on ‘Freedom Day’ by saying on Facebook that he didn’t want to live in a ‘Muslim alcohol-free caliphate’ for the rest of his life.

It didn’t matter that he’d said it outside the workplace on a personal account. Like Maureen, he was dismissed for breaching social-media policy and bringing the company into disrepute. (In case you’re puzzled, his use of the word ‘caliphate’ was considered to be anti-Muslim.)

With our help, Jeremy fought back in court and got a judgement of ‘unfair dismissal’. Meanwhile, the organisation Christian Concern is helping Maureen take legal action against L&Q.

But for every victim of cancel culture who is able to seek justice, there are thousands who suffer in silence – kicked out of their jobs and consigned to the dole queue just because they’ve said something that ‘triggered’ the woke witchfinder generals.

The real purpose of these ‘punishment beatings’, of course, is to send a message to everyone else: if you breathe a word against our progressive ideology, you’ll be next up against the wall.

And it works. According to a 2020 poll by Survation, 27 per cent of students said they’d ‘hidden’ their real views because they were worried about damaging their careers. A whopping 40 per cent further said they’d concealed their opinions on ethical or religious matters for fear of being judged.

The proposed Higher Education (Freedom of Speech) Bill will strengthen protections for free speech at English universities – not Scottish ones, unfortunately, where they’re badly needed. But we need comparable legislation to safeguard the rights of people like Maureen in the workplace.

That’s why the FSU is campaigning for an amendment to the Employment Rights Act 1996 to make it impossible for companies to discipline workers for saying something non-woke outside their place of work. In addition, the amendment should impose a 12-month statute of limitations on the sin of bringing the company into disrepute so you can’t be investigated for saying something un-PC more than a year ago, even if you said it in front of colleagues.

We have to do something to stop the scourge of what I call ‘offence archaeology’, in which the woke Stasi trawl through everything people have said on social media – dating back to when they were teenagers in some cases – looking for things they can dredge up and pretend to be upset about so they can cancel them.

I firmly believe we can defeat these bullies attempting to silence anyone who says something they find disagreeable. But we can only do it if we band together and don’t stand by in silence when they pick off someone like Maureen.

I happen not to agree with Maureen’s views on marriage, but that’s irrelevant. I will fight with every fibre of my being to defend her right to free speech – and so should you.

Toby Young is the General Secretary of the Free Speech Union.