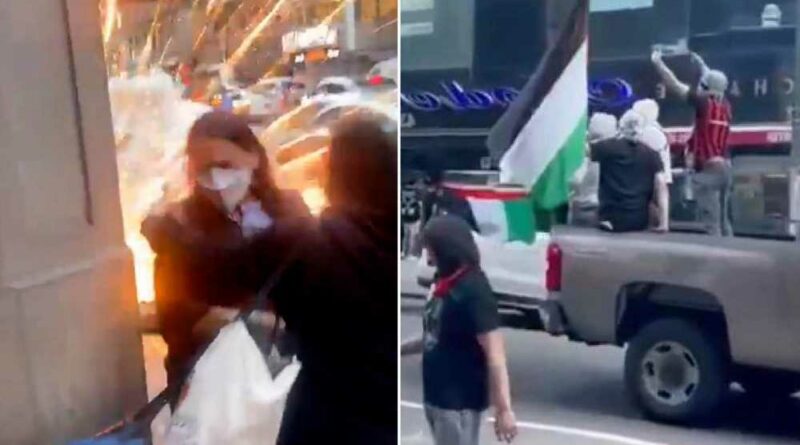 Terrifying video shows the moment a firework was flung from a pickup truck full of Palestinian flag-waving protesters in Midtown’s Diamond District on Thursday — as clashes over the trouble in the Middle East heated up in New York.

The Twitter clip shows one of several men in the vehicle throwing the “Fourth of July style” device toward the sidewalk on West 47th Street near Fifth Avenue — and celebrating as it explodes.

The firework went off near a 55-year-old woman, who was not shown on the video, as she was leaving work around 6 p.m., according to police sources. She suffered a burn and pain to her back — and her leather jacket and shirt were damaged — though she doesn’t think the firework-flinger targeted her, according to the sources.

The victim went back inside and spoke to her co-workers, who advised her to go to the hospital, the sources said. She spotted an ambulance nearby and was taken to Bellevue Hospital.

Firework packaging and one mortar shell were recovered, according to police sources.

Witness Ronen Ajadi, 28, of Great Neck, described the device as “a Fourth of July style firework — it’s something you see in the sky, not on the ground.”

“I started running,” Ajadi said. “It exploded right behind me … I was less than two feet away … I couldn’t hear anything after.”

Then around 6:30 p.m., a 29-year-old man was attacked by a group of five or six men on Broadway near West 49th Street, authorities said.

They allegedly knocked him to the ground while making anti-Semitic statements, punched, kicked, pepper-sprayed him and struck him with crutches.

The other suspects remain at large.

“There is NO place for hate of ANY kind, against ANY group, by ANYONE in NYC,” Police Commissioner Dermot Shea said in a strongly worded Friday tweet. “This, and every incident, will be fully investigated by @NYPDHateCrimes — as they always do. This is a time for NYers to come #together, to be New Yorkers above all else.”

According to preliminary numbers released by the NYPD, 26 people were arrested during the protest — including one person who will go through the system, seven who received desk appearance tickets, 17 who were given summonses and one juvenile, according to police.

Skirmishes between the groups erupted in the Midtown tourist hub as Israel and Hamas hoped a cease-fire in Gaza would end more than 10 days of devastating hostilities.