Mcallen, Texas: Melania Trump, wife of US President Donald Trump, went on a damage-control mission for her husband on Thursday with a visit to a border detention facility where children separated from their parents were being held.

The first lady, whose pressure was a factor in Trump’s decision to sign an executive order on Wednesday keeping immigrant children together with their parents, left the White House quietly on Thursday morning and flew to Texas for the visit.

Her staff said she planned the trip herself out of concern over how her husband's policies were affecting families apprehended crossing the border illegally.

"She wanted to see everything for herself," Trump's spokeswoman Stephanie Grisham told reporters travelling with her. "The images struck her, as a mother, as a human being." 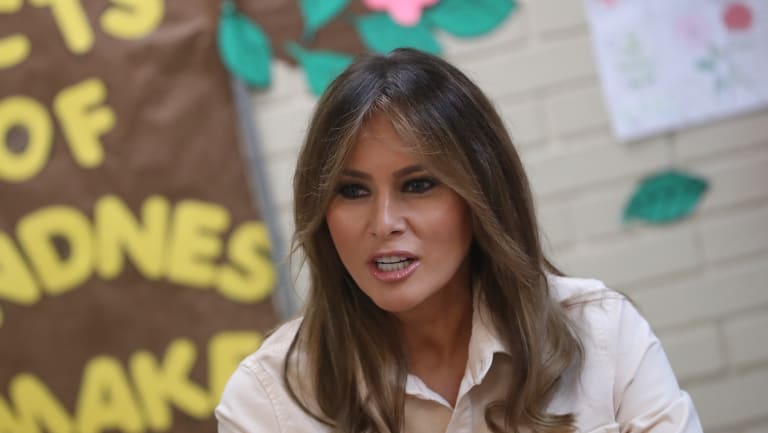 Melania Trump's itinerary includes visits to two sites in McAllen, Texas – a detention centre housing children separated from their parents and an intake facility for apprehended parents and children.

"I'm here to learn about your facility," she said as she received a briefing about the work of Upbring New Hope Children's Shelter. She told facility directors that she wants to "ask you how I can help these children be reunited with their families as quickly as possible".

The first lady's demonstration of concern for the people affected by US immigration enforcement draws a contrast – whether deliberate or not – with her husband, who often speaks derisively of those who enter the country illegally and regularly portrays them as threats to public safety.

On Tuesday, for example, the President said in a tweet that Democrats "don't care about crime and want illegal immigrants, no matter how bad they may be, to pour into and infest our Country, like MS-13".

His use of the verb "infest" drew widespread criticism. 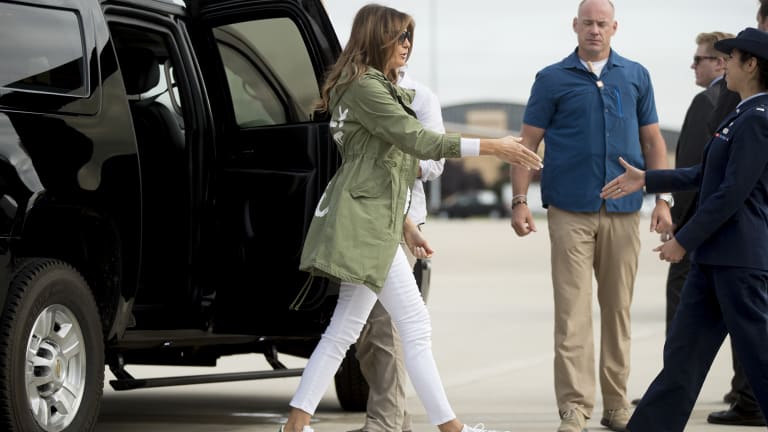 First lady Melania Trump board a plane to Texas on Thursday.

In allowing journalists to accompany her, Melania Trump ensured that her meetings with immigrants would be well publicised. Her staff did not announce the Texas trip in advance and required news organisations travelling with her to agree not to publish any information until she arrived.

The visit spotlights the dissenting role the first lady appears to have played, first behind the scenes and eventually more publicly, as her husband's administration has implemented what it calls a "zero-tolerance" immigration approach. The policy, which aims to bring criminal charges against anyone caught crossing the border illegally, has led to the separation of more than 2000 immigrant children from their parents.

The strategy has engendered enormous public outrage. Two-thirds of Americans have said in polls they oppose separating immigrant families, though a majority of Republicans say they support the President's approach.

On Wednesday, Trump made a rare retreat, signing an executive order that he said would end family separations as Congress prepared to consider legislation that would force a halt to the policy.

Grisham said the first lady two days ago told her team to make the visit happen and told President Trump of her plans. "She told him, 'I'm headed down to Texas,'" Grisham said. "And he was supportive."

Melania Trump, herself an immigrant from Slovenia, first weighed into the debate on Sunday with a public statement saying she hated to see children separated from their families and calling on the US to govern "with heart". Privately, she also encouraged her husband to abandon the policy, according to people familiar with the matter.

Her trip to Texas was the most high profile public appearance Mrs Trump had made since undergoing a surgical procedure for a benign kidney condition on May 14.