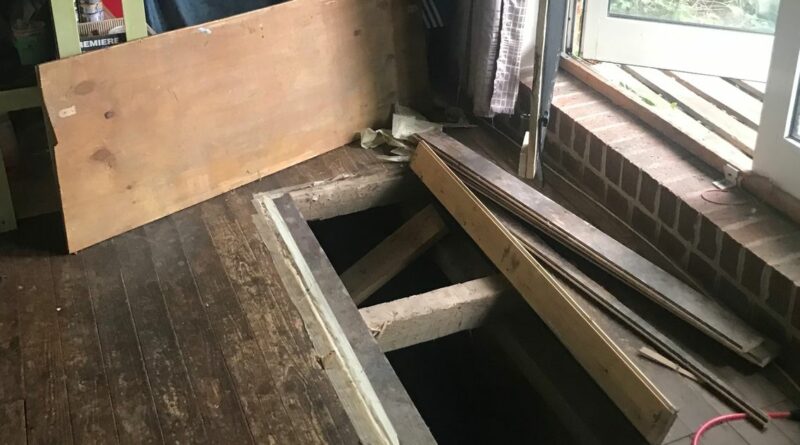 The convicted paedophile's former home in Germany was raided by officers after the current tenant raised the alarm.

Brueckner had resided at the property when he ran a kiosk in the city between 2013 and 2016, The Mirror reports.

During that time he illegally dug out the 10ft deep cellar.

It was reported last year by one of Brueckner's friends that he had said he wanted to create a dungeon, with soundproof walls.

He reportedly made a sinister reference to monster Josef Fritzl, "like the guy in Austria."

There is no current evidence to suggest he ever followed through with that idea.

When German detectives were closing in on him for a number of offences, including rape, Brueckner left the home and went on the run.

The current tenant, Sabine Selig, 36, said she called the police the moment she heard about Brueckner's link to the Maddie investigation.

Sabine revealed that Brueckner, whom she called "grubby", was desperate to hand over the place when he left in 2016.

Now the 36-year-old says she realised he was itching to go on the run after being convicted of sexually abusing a girl in Germany.

He reportedly even joked about heading to Italy where he was eventually captured in 2018.

Sabine told The Mirror: “If I had known what kind of guy he was, I never would have moved in here.

“He wanted to give up his little house, his allotment quickly – as quickly as possible. He wanted to run away to Italy. I had to pay him 800 euros to take over the garden.

“It all looked like a rubbish dump, not like a flat. I didn’t care, the garden was big, you could make something out of the hut.

“And I needed the space and Brueckner was under stress.”

After moving in, Sabine says, she noticed Brueckner had dug the cellar but not given it much thought.

The artist contacted the police as soon as she found out he was a prime suspect in the Maddie case.

Sabine said: “I went straight to the police, because I remembered the half-closed cellar and I don’t know what’s still down there.

“It’s a strange feeling, a hole under your feet and no one knows what’s ‘buried’ there.”

The wooden structure where she lives is secluded but easily identifiable due to its distinctive blue roof.

It sits in a large garden, looking like something out of a fairy tale, with fruit trees surrounding it.

But inside the house itself it is damp and neglected.

Brueckner, a skilled tradesman, did fit the 'gross' interior with a kitchen and wood-fuelled stove in an attempt to make it more homely.

He also decorated it in what Sabine described a “creepy” fashion.

She said: “He showed me his handicrafts in and around the house.

“Like a child’s world, a fairy-tale house that can always light up.

“It was fun and spooky at the same time. A guy who is playful like a child, I still thought.”

Describing Brueckner she said: “He made a nervous, unsorted impression. He always had a beer in his hand, as far as I can remember.

“He was always very short-tempered, full of tension due to his personal circumstances, one clearly on the run – but from what, I don’t know. There were also friends of his in the allotment garden, but fortunately I haven’t seen them again so far. Strange characters.

“He was always in a jacket, according to my memory was always a bit dirty and he was totally under pressure and had to get away quickly."