Katya Echazarreta recently made history as the first Mexican-born American woman and one of the youngest women ever to fly to space — a lifelong dream she was able to accomplish at only 26 year old.

On June 4, Jeff Bezos’ Blue Origin rocket carried its fifth group of passengers to the edge of space and Katya got an opportunity to apply to one of the six seats through a nonprofit called Space for Humanity.

The organization’s goal is to send “exceptional leaders” to space and allow them to experience the “overview effect,” a phenomenon astronauts have described after looking down at the Earth from the outside. “They recognize that, as humans, our commonalities far outweigh our differences,” Space for Humanity says on its website.

“When you apply to a trip to space, you don’t really expect to get a trip to space,” Echazarreta told CBS News. “I decided to just go for it. I am the kind of person that will always, always take a shot, even if it looks impossible. Because if you don’t do it, then it will be impossible.” 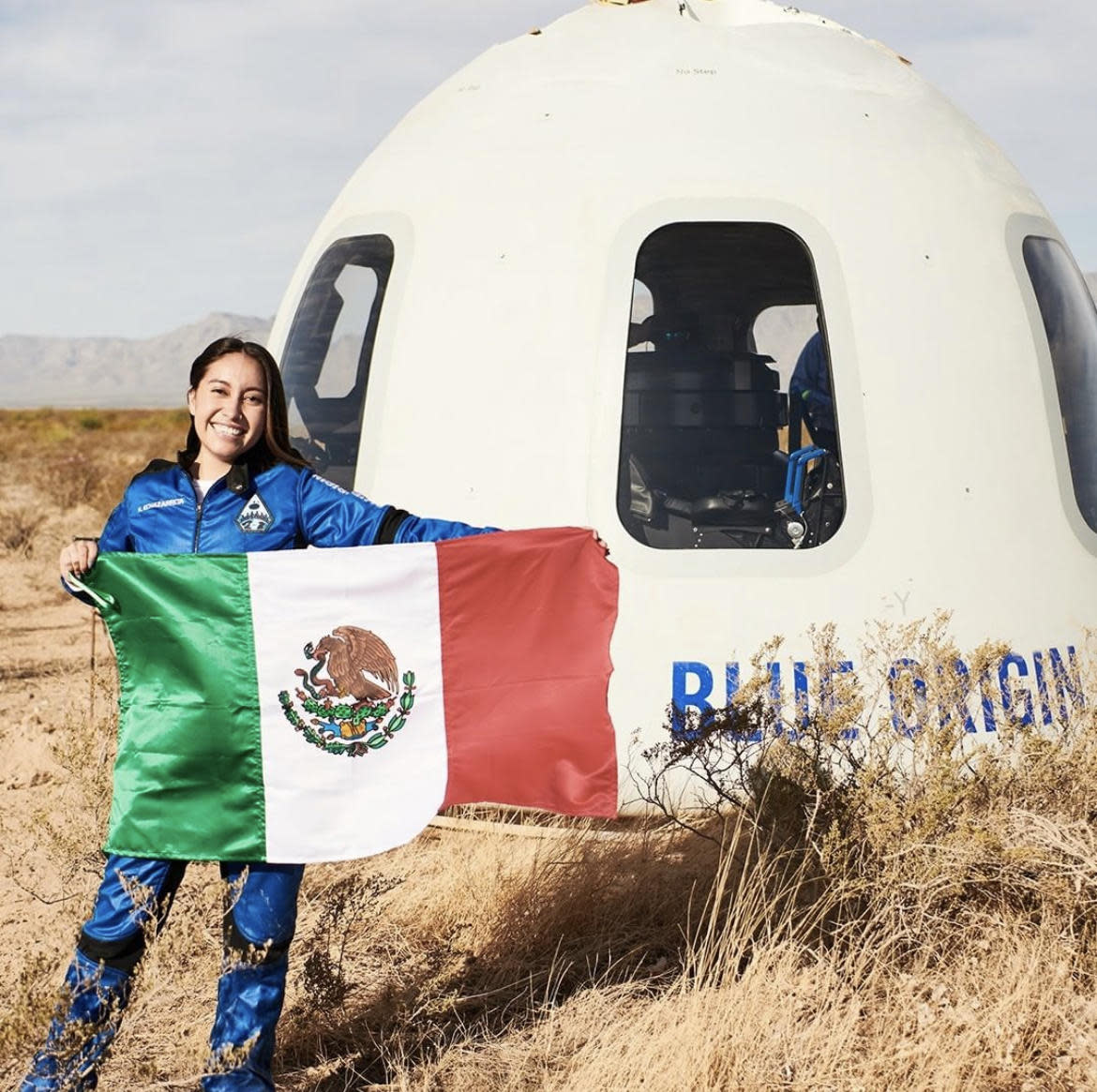 Katya, an electrical engineer originally from Guadalajara, Mexico, was selected for the trip from a pool of 7,000 applicants from more than 100 countries based on her outstanding achievements in the space industry.

“I remember, I had never been so nervous in my entire life. My hands were shaking, I couldn’t sleep for days,” Echazarreta said.

After going through training, she and five fellow passengers took off from Blue Origin’s launch facility in West Texas. The spacecraft vaulted them 62 miles above the Earth’s surface, giving them a few minutes of weightlessness before a descent back to a parachute landing.

Growing up, Katya Echazarreta was told her dreams were out of reach. Then she proved the sky is ✨literally ✨the limit.Meet the 26-year-old who made history by becoming the first Mexican-born American woman, and one of the youngest women, to go to space. pic.twitter.com/LnobbGKzh7

“The trip up was the most fascinating experience because a lot of us are used to traveling horizontally. But when you’re in a rocket, you’re going up vertically and that feels very strange,” Echazarreta said.

“You have these massive windows to your side, and the view is just beautiful. You notice the moment when you’ve never been higher than this before, but you’re not really able to continue thinking about that thought because moments later, your capsule is going through separation from the rocket. You’re experiencing microgravity for the first time, and you look out the window, and you see a planet. A very real, large, beautiful planet with the most beautiful glow of the atmosphere. You’re able to see everything in three dimension — and on top of that, you’re floating!”

She flew alongside Evan Dick, an investor who had already flown with Blue Origin in a December flight and became the first to fly twice; Hamish Harding, the chairman of a jet brokerage company; Jaison Robinson, a finalist on the TV show “Survivor: Samoa” in 2009 and later the founder of a commercial real estate company; Victor Vescovo, the co-founder of a private equity investment firm; and Victor Correa Hespanha, the second Brazilian to reach space, who secured his seat after buying an NFT and who found out he was going to space by scrolling through his Twitter feed. 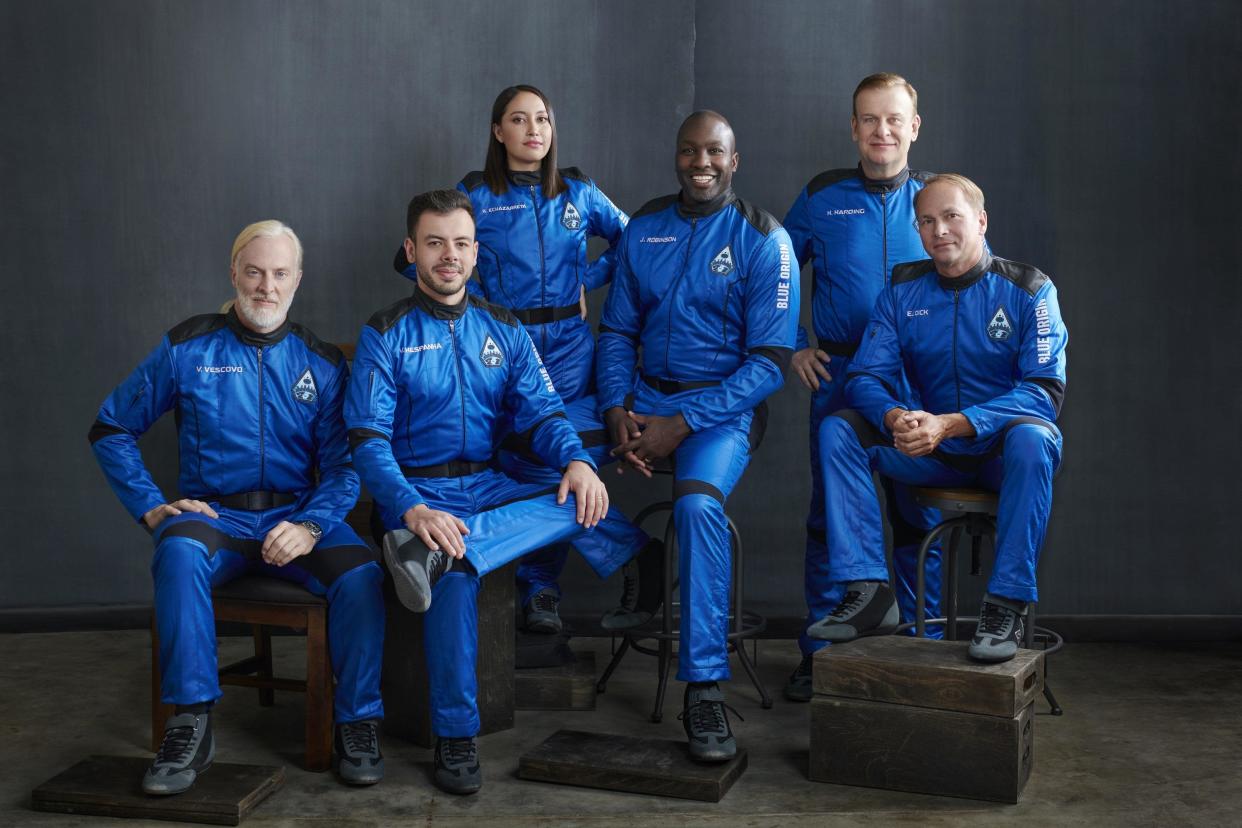 Echazarreta, who graduated from UCLA on a full scholarship, is currently getting her master’s degree in engineering at Johns Hopkins University. She says her journey to space changed her perspective on life and she came back as a “much more patient and understanding human.”

“Seeing the Earth from the outside … it really puts things into perspective. Everything that we’ve ever experienced, all of your problems, and all of your obstacles, and everything that feels like the end of the world to us sometimes, it’s all there. It feels so big to us, and yet it’s not, because I just left in a matter of minutes.

“We are used to looking at out sky and it looks like it’s so vast, and it’s so big, and there’s so much of it, and yet when you’re in a rocket on your way out, you see how little of it there actually is. That thought can be both comforting and scary, to know that the things that we have felt for so long that seem so large, are actually so small, fragile and vulnerable — just like we are, as humanity.”

Growing up, Echazarreta’s life was not always easy. She migrated to the U.S. from Mexico when she was 7, and when she was just a teenager, she “teamed up” with her single mom to raise her three siblings. To help financially support her family, she worked multiple jobs, including at McDonald’s, as a dog-walker, and when she was older, as a grader for the math department at the community college she attended before transferring to UCLA.

Echazarreta hopes her success can have an impact on her community.

“We are now seeing a lot of little girls vocalizing and verbalizing that this is what they want, too. And when I was a little girl and I would say these things, I was constantly being told that it was a ridiculous idea, because of how unrealistic it is. So, being able to provide these young women and girls with an example of, ‘No, it’s not unrealistic, it’s actually something that is real and possible and can happen to you,’ that is the reason why this was so important for me to do.”

Before starting her master’s degree, Echazarreta interned at NASA’s famed Jet Propulsion Laboratory in California —and she performed so well that they offered her a full time position after graduation. 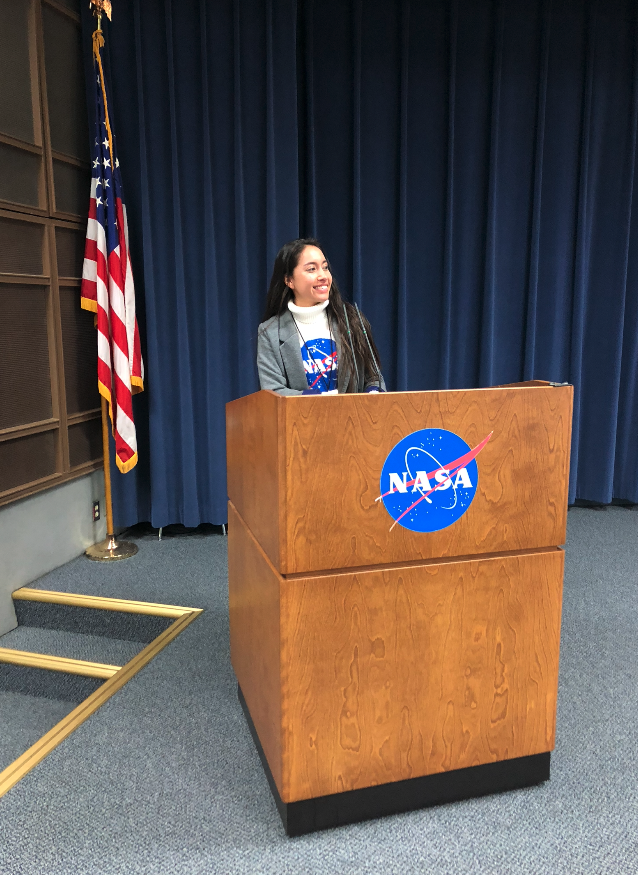 “It wasn’t enough for me to have made it,” Echazarreta said. “I was looking around and I wasn’t seeing many people who looked like me, women of color or just women in general, in some of these spaces. I wanted other women and other people of color who are interested in doing the same things that I’ve been doing to know that one of us has made it, and it is possible, and I want to show you how I did it. I have not been number one throughout my entire life in order to have made it here. Sometimes I’ve been below average. Sometimes I’ve failed.”

With her growing list of accomplishments, Echazarreta has even big dreams.

Voters head to the polls in New York and Illinois