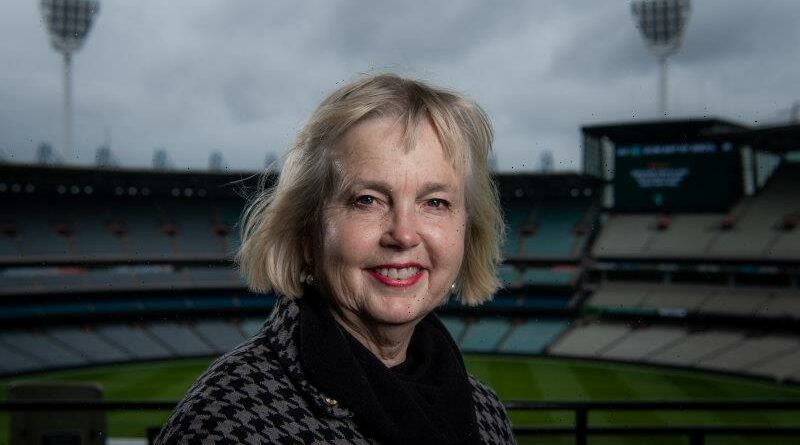 For the first three years that she lived in Melbourne, Peggy O’Neal kept a return ticket to the US in the top drawer of her desk.

“I liked it right away,” she says. “That didn’t mean I wasn’t homesick.” 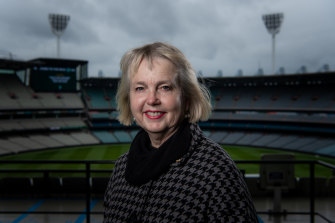 Thirty-two years after moving here from the US, the president of the Richmond football club and incoming RMIT Chancellor has so firmly embraced her adopted city that on Saturday she was named as Melburnian of the Year.

Over a coffee with The Sunday Age at the My Oh My cafe on Swan Street, the quietly spoken 69-year-old remains largely unnoticed, despite the cafe’s location in the Tigers’ heartland and the polka dot raincoat she was wearing.

O’Neal helped steer Richmond to three premierships and is credited with reinvigorating the football club, but she is characteristically modest about her role in the Tigers’ dominance.

O’Neal is a trailblazer in many ways. She was Richmond’s first woman director and the first female president of an AFL club.

She says her many years of experience as a partner at corporate law firm Herbert Smith Freehills helped prepare her for the testosterone-heavy AFL. 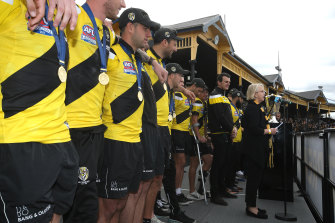 Peggy O’Neal addresses the Punt Road faithful after the Tigers won the flag in 2017.Credit:Wayne Ludbey

“To see both of them with a grand final team, I was so delighted, I really was,” she says. “I don’t like the teams, but I really wanted them to be there.”

Women now make up 50 per cent of Richmond’s board and O’Neal says the next task is to ensure there is multicultural and Indigenous representation.

“Being the first this and the first that, you get a lot of attention, but you’re sort of a novelty for a while,” she says. “You really do need to get a critical mass of women on board to get representation from all different perspectives, all walks of life and it goes back to better decision-making and things that you’re blind to that other people pick up.”

Lord mayor Sally Capp says O’Neal’s award as Melburnian of the Year recognises her leadership and the inspiration she gives to others through her work at Richmond and in tackling womens’ homelessness and mental health.

“I’ve known Peggy for some time and have watched her carve her way through male-dominated industries,” Capp says. “She has always brought others along on the journey with her.”

O’Neal is set to finish up her term at Richmond next year after nine seasons as president and 17 on the board as she takes on the new challenge of taking over from Ziggy Switkowski as chancellor of RMIT.

Living alone, she found Melbourne’s lockdowns difficult, particularly this year when her bubble buddy who she watched Richmond’s games with, had to go home halfway through the game at 9pm to comply with the curfew.

However, O’Neal is well aware for many people, particularly the international students who are so crucial to RMIT, the coronavirus pandemic was much tougher with many left homeless and unable to work or study.

She says students were left in a “nether world” where they were not citizens or permanent residents and had to turn to charities like Foodbank.

“Now’s the time to put in place some of the stronger foundations to support people who are on our shores when something happens that affects everyone,” she says.

She’s optimistic for Melbourne with more people getting vaccinated and lockdowns behind the city.

“I think there’s a real determination to sort of jumpstart the city and to get it back to something resembling normal,” she says.

O’Neal is confident it’s the right time for her to move on from Tigerland.

“You have to keep looking for the next thing,” she says. “In football the coaches say ‘if we play next year like we played last year, even in grand final years when we were premiers, we won’t win’. You’ve got to be ahead of the curve.”