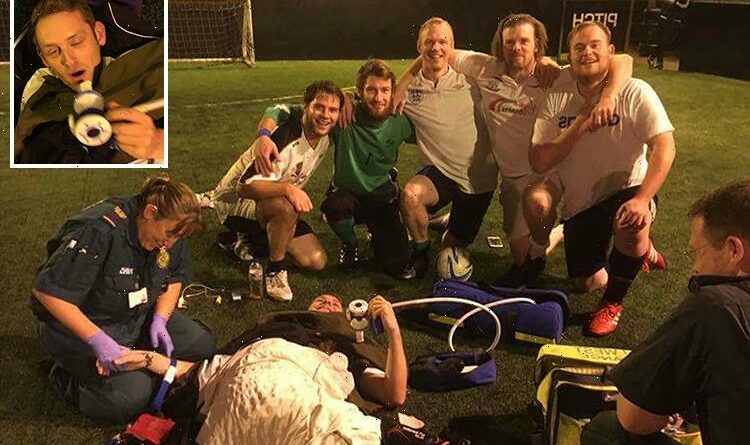 A FIVE-A-SIDE football squad poses for a team photo as one of their players lies prone on the pitch with a fractured thigh bone.

Ryan Lee's friends gathered round for a squad snap as he received oxygen after he dislocated his right knee and fractured his femur during a game in Preston, Lancashire. 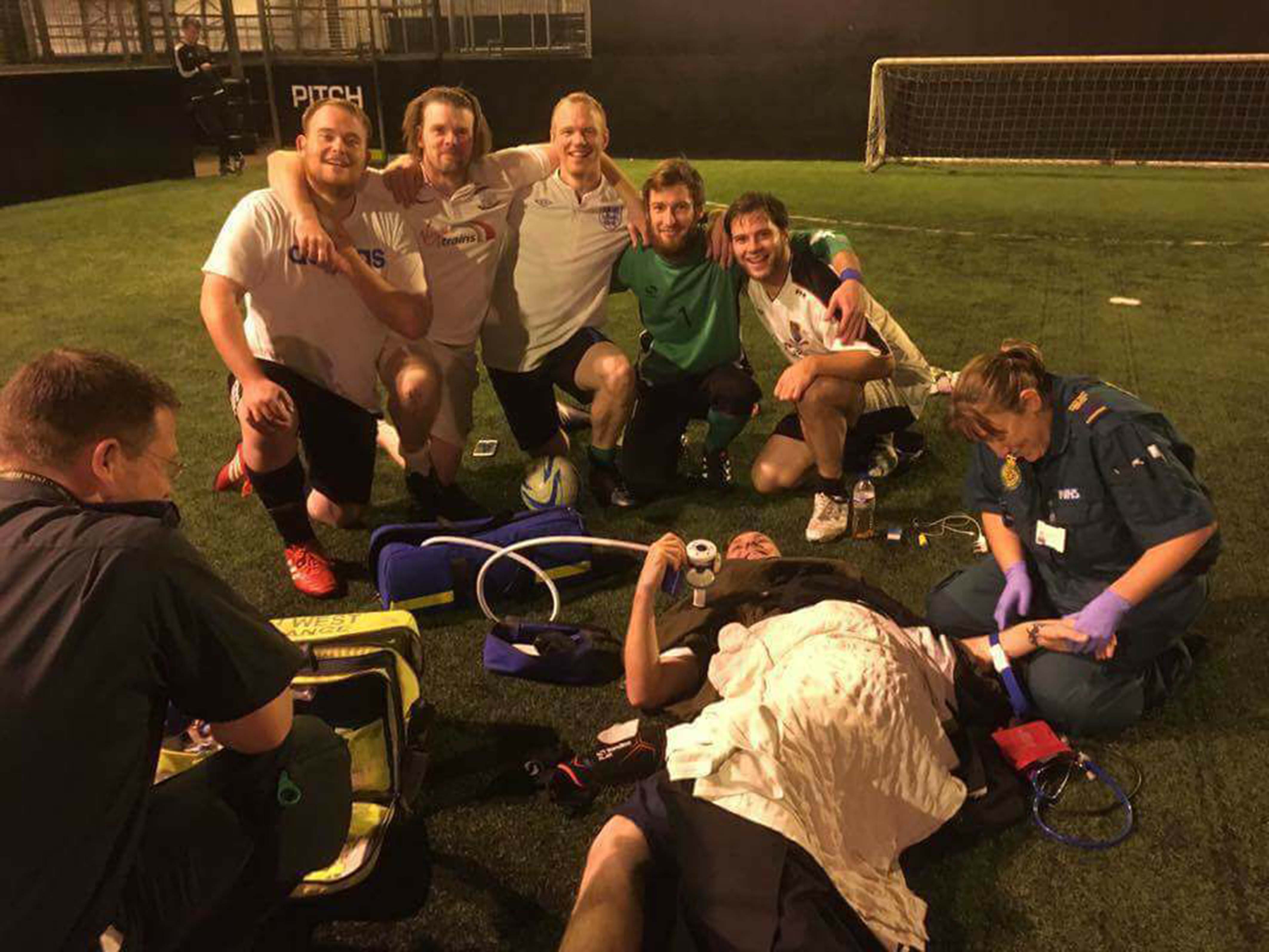 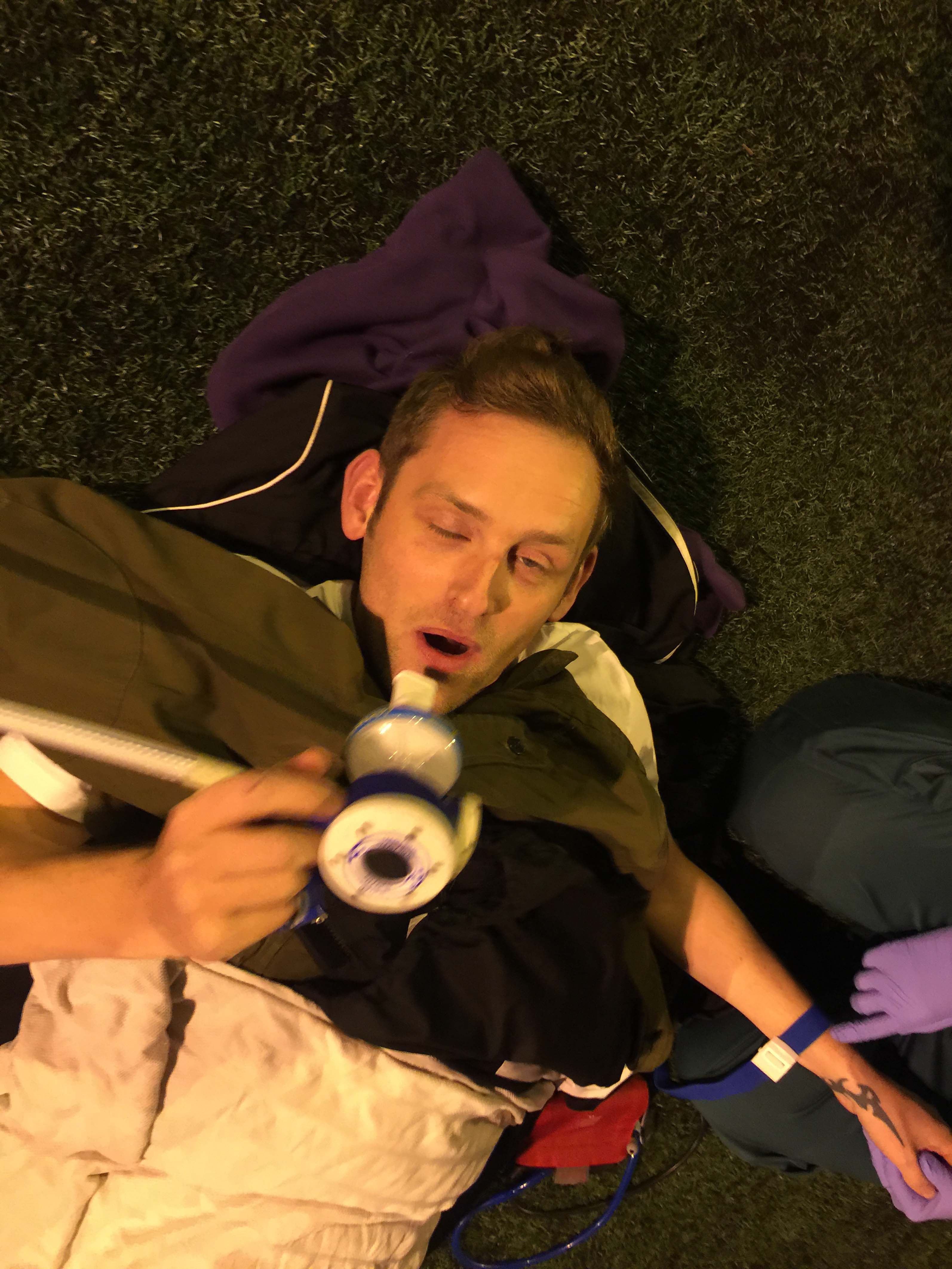 The rest of the Sunshine FC work team linked arms and smiled in the background while paramedics treated Ryan and his ballooned knee.

As if karma bit back, teammate and professional snowboarder, Dean Hinchey, later found himself in hospital after later realising he'd broken a foot bone in the same match.

The team played on and won 9-8 on an adjacent pitch while dad-of-two Ryan waited for an ambulance and then returned to his side to take a series of jokey pictures.

Ryan, a 31-year-old logistics manager, said: "I was doing my best to smile for the camera but I think it was before the morphine really kicked in.

"It was really painful.

"There was no malice in the tackle but whatever way I twisted, my kneecap just dislocated and popped out.

"It was really swollen.

"It was probably about 15 minutes into the game and the lads wanted to play on so they moved to the next pitch while I lay there in the freezing cold.

"I think I was there lucky mascot, because we beat the team which is top of the league.

"The funny thing is, it's the first time we've all been together so we had planned to take a proper team photo.

"It just turned out that I was on the ground getting oxygen.

"I did try to smile for the camera.

"They all looked very pleased with themselves in the background.

"I know they were only doing it for a bit of banter, so I didn't mind.

"I found out later that I'd fractured my thigh bone too.

"I had to have an MRI scan and I'm on crutches now.

"I dislocated my knee six years ago wearing a sumo wrestling costume, but it just popped back in to place that time.

"I'm pretty stubborn so I still went to work the next day but I can't do any carrying or things like that." 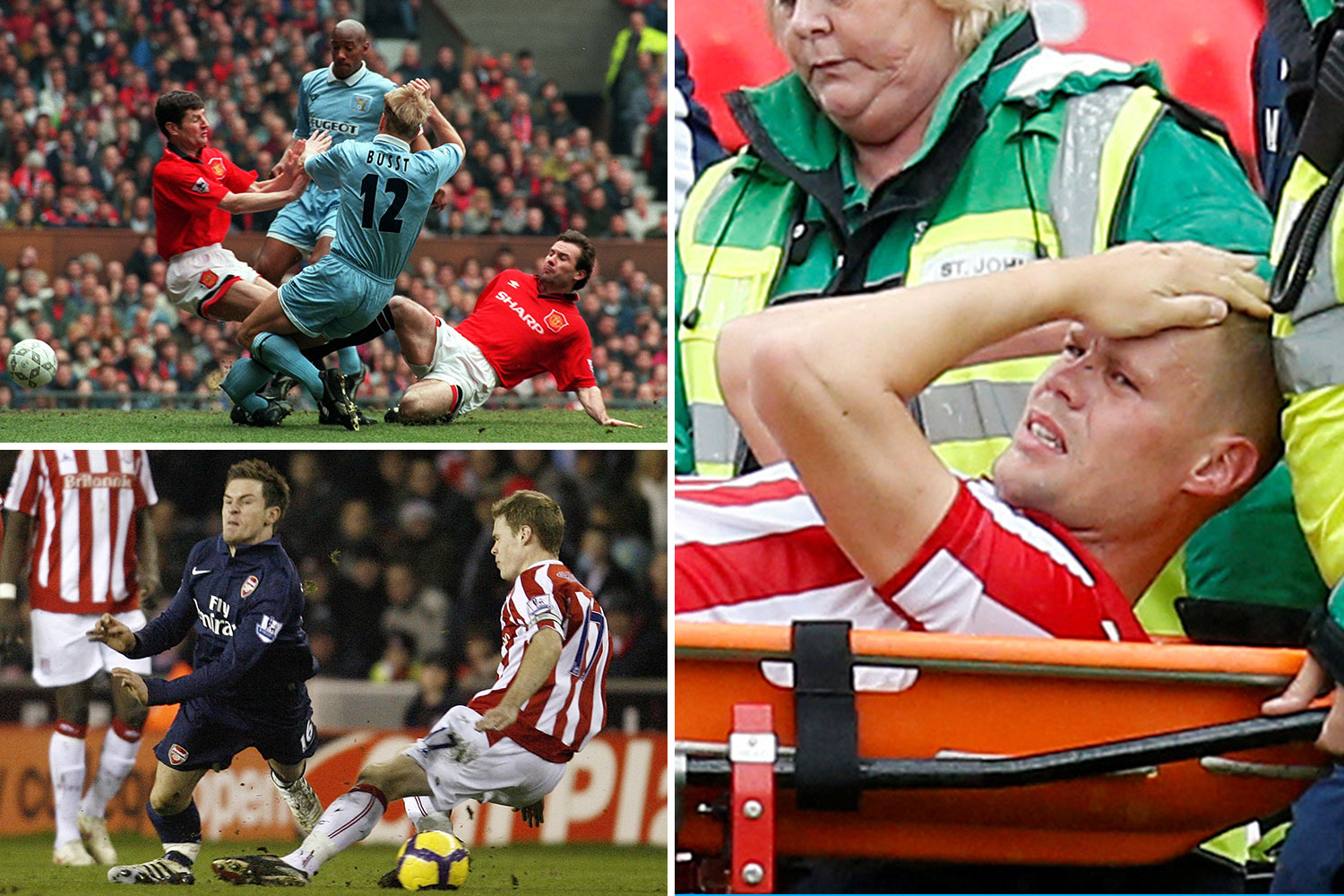 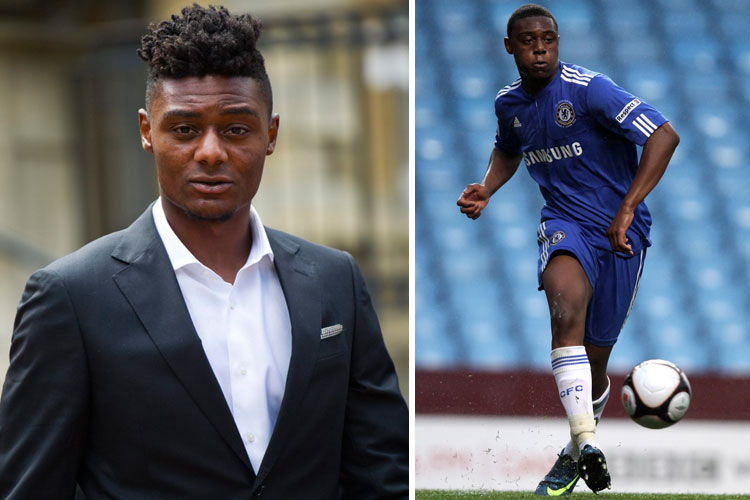 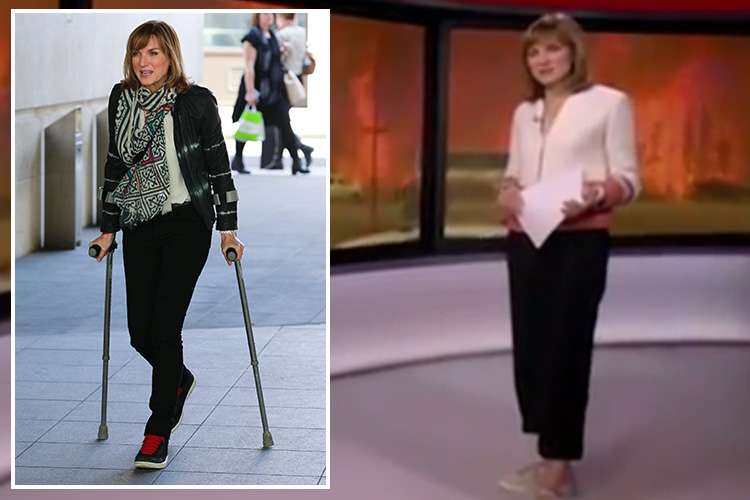 'I HEARD THE BONE SNAP' 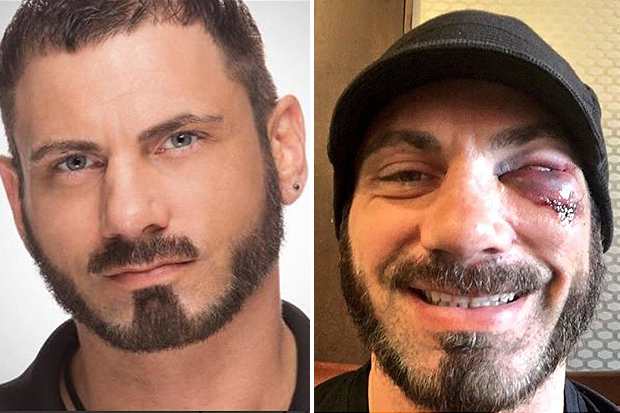 And Dean, who can be seen smiling at the centre on the team photo, later found out that his niggling foot injury was a broken metatarsal which rules him out of his snowboarding work until at least the new year.

Dean, 31, said: "We've only just set up the team really so we've been meaning to get a proper photo but I didn't expect it to be like this.

"It was a pretty innocuous tackle and Ryan just came off badly.

"We know he's hurt his knee before but this time it was really swollen.

"We moved to the next pitch and just played on without him." 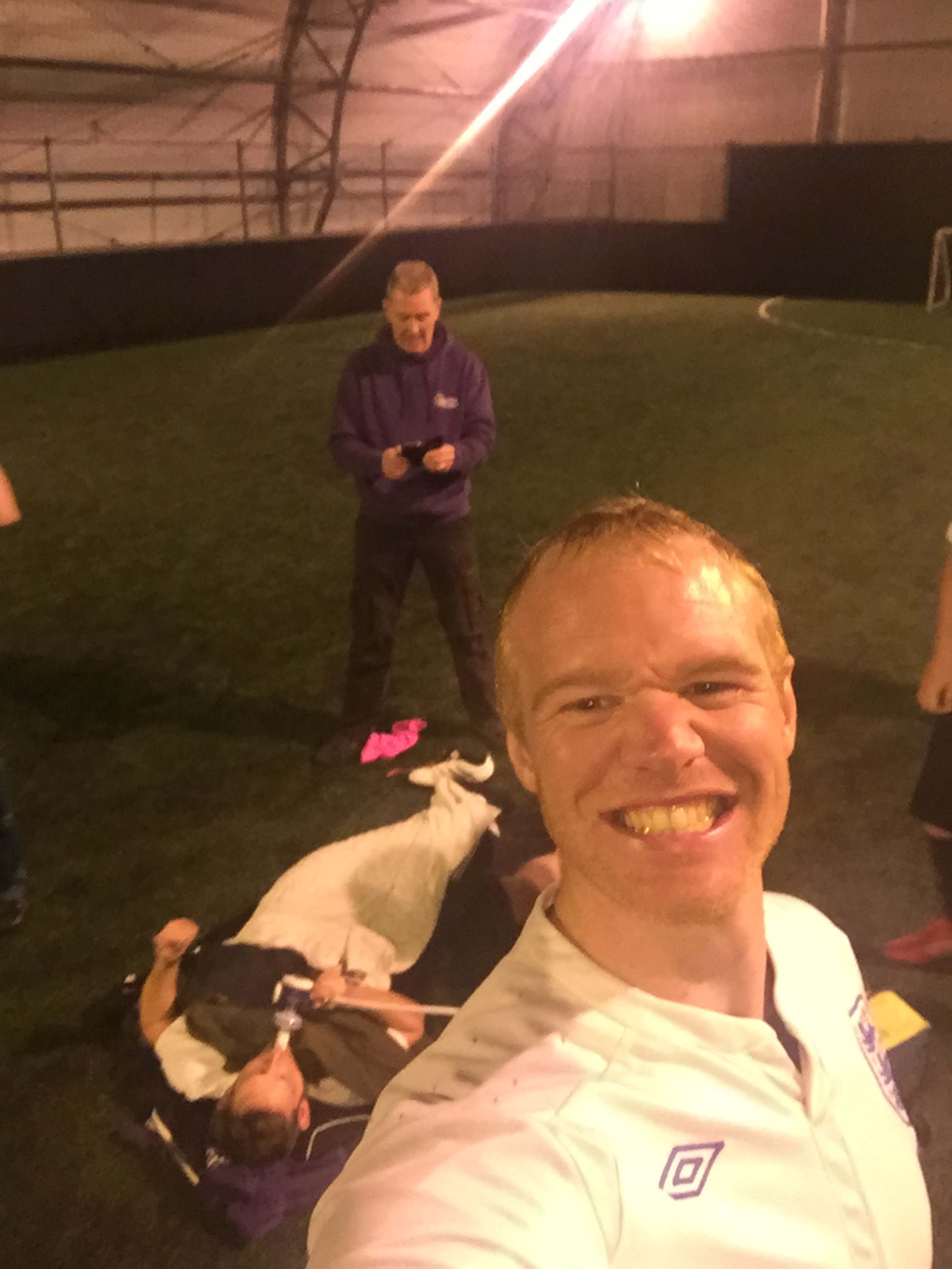 Dean added: "We stayed on after obviously to make sure he was ok.

"I think he was cold more than anything.

"He had been taking selfies so we thought it would be the ideal time to take the team photo.

"It turned out to be pretty funny.

"Ryan went to A&E but unfortunately I ended up there too a few days later.

"I stubbed my toe and hobbled around for a bit but I didn't think it was that bad.

"Next thing I know I'm in a cast for three weeks.

"I've just had it off the other day.

"I fractured a metatarsal but you wouldn't know it from the way I'm smiling in that picture.

"I don't think the team have won since all the injuries so that probably not a coincidence."